Spotlight on cracks in NATO 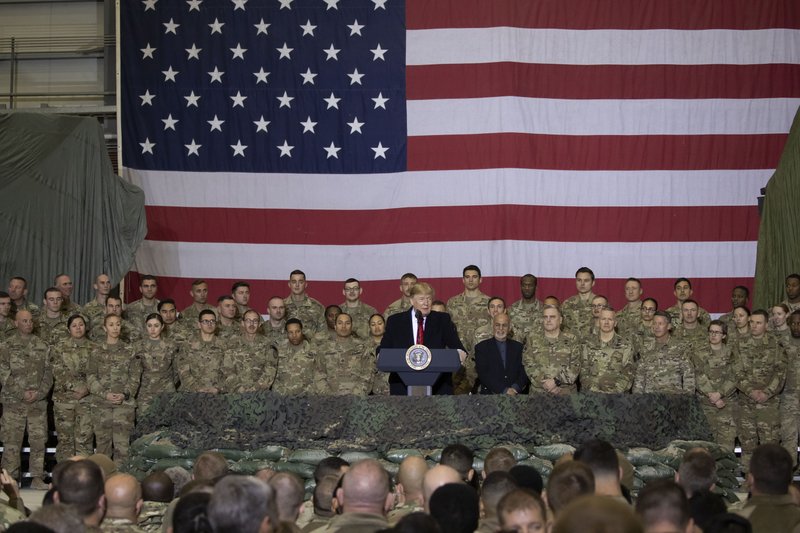 BRUSSELS -- NATO leaders will gather in London today as the world's biggest military alliance, marking its 70th birthday, battles itself.

As thousands of troops stand ready along Europe's eastern flank to deter Russia -- the reason the trans-Atlantic alliance was founded in 1949 -- or help keep the peace in places like Afghanistan and Kosovo, the leaders of countries with NATO's largest armies are taking pot shots at one another.

Before the two-day summit, to include receptions at Buckingham Palace and Downing Street plus a working session at a golf resort in outer London, Karen Donfried, president of the German Marshall Fund think tank, said the 29 NATO allies are approaching this meeting "with a sense of foreboding."

"Few anticipate a gathering that will both unify and stop the growing cracks in cohesion. Alliance leaders carry the responsibility to articulate NATO's common purpose and ongoing relevance. If they do not, Vladimir Putin will be raising a glass in Moscow to the fraught state of the alliance at 70," she said, in reference to Russia's president.

In recent months, President Donald Trump has declared that peace is near in Afghanistan -- NATO's longest and most costly operation in terms of lives and cash -- only to call off talks with the Taliban. Now, it seems, they are on again. All the while, U.S. troop numbers are declining. Other allies are unsure what to make of it.

Last month, Trump pulled troops out of northern Syria. Turkey took that as a green light to launch an invasion that has alarmed its European NATO partners, many already struggling with the political fallout sparked by the arrival of tens of thousands of Syrian refugees via Turkey in 2015.

At previous NATO meetings, Trump declined to affirm the Article 5 principle that an attack on one is an attack on all, and he intimated that he would pull the United States out if Europeans didn't spend more on their own defense.

French President Emmanuel Macron, complaining of a U.S. leadership vacuum and sensing an opportunity for France to fill it and boost Europe's security credentials, has lamented the "brain death" of NATO and says the allies need "a wake-up call."

Macron wants strategic talks about where NATO is going, who its adversaries really are, how to tackle terrorism, what to do about an unpredictable ally like Turkey, and how to improve relations with Russia, rather than spend a third summit in self-flagellation about military spending.

Secretary-General Jens Stoltenberg flew to Paris last week to talk to Macron ahead of the meeting. But in a joint news conference, the French president did not appear to have been appeased.

"We needed a wake-up call to continue, and I'm pretty glad about it that this was the case," Macron said. "We have the responsibility of not simply continuing to talk about financial issues, given what the genuine challenges are today."

For some diplomats, Macron's focus on problems at NATO has been just as challenging as Trump's push on spending. In eastern Europe, leaders feel that calling into question NATO's defense commitments could embolden Russia to attack.

In Germany, Chancellor Angela Merkel has been forceful in her push-back.

"The preservation of NATO is in our fundamental interest today, even more so than in the Cold War, or at least as strongly as in the Cold War," Merkel told her parliament on Wednesday.

And Macron's Thursday comments alongside Stoltenberg further frustrated many at NATO, after he appeared to downplay Russia as a core focus of the alliance and boosted terrorism as the main priority instead.

"I hear some saying that Russia or China is our enemy," Macron said. "I don't think so. Our joint enemy, clearly within the alliance, is terrorism that's struck our countries."

NATO blames Russia for piling up nuclear weapons at its door, trying to undermine alliance democracies, teaming with its enemies in Syria, conducting a widespread cybersecurity campaign, and sparking a war on European soil in Ukraine. Many policymakers feel it makes sense to keep focus on the Kremlin.

In the latest act of political friendly fire among NATO members, Turkey accused Macron of supporting terrorism for agreeing to hold talks with a Syrian Kurd politician whom Ankara considers to be part of an extremist group.

"You should get checked whether you're brain-dead," Erdogan said Friday, in remarks directed at Macron. "Kicking Turkey out of NATO or not, how is that up to you? Do you have the authority to make such a decision?"

Meanwhile, Erdogan plans to test a new air defense system, purchased from Russia, that its partners refuse to allow near any NATO military equipment.

NATO has no real wars to fight but its power, and Europe's security, lies in the abilities of the allies to deter adversaries.

Since Russia annexed Ukraine's Crimean Peninsula in 2014, NATO has deployed more than 4,000 troops to Estonia, Latvia, Lithuania and Poland to discourage further military adventurism by Putin. The allies also ended their post-Cold War budget cuts and stepped up defense spending.

"The leaders have a responsibility for not undermining deterrence," said Tomas Valasek, senior fellow at the Carnegie Europe think-tank.

"Our adversaries are constantly looking for chinks in our armor. For cracks or signs of division. God knows there have been plenty of those," he added.

One senior NATO diplomat -- who spoke on condition of anonymity to be frank about challenges ahead of the meeting -- described the alliance as suffering from "PTSD," or post-traumatic stress disorder, with Stoltenberg and others focused narrowly on how every alliance decision might play out inside the Oval Office.

Stoltenberg said at a Friday news conference that the 28 non-U.S. members of NATO have invested $130 billion in their defense since 2016 -- an unusual way of presenting spending increases that started after Russia's annexation of Crimea.

NATO diplomats say privately that the 2016 peg is for Trump's benefit.

When pressed at Friday's news conference about targeting the gathering toward Trump, Stoltenberg said the things that make the White House happy also are good for alliance security.

Information for this article was contributed by Lorne Cook of The Associated Press and by Michael Birnbaum of The Washington Post.