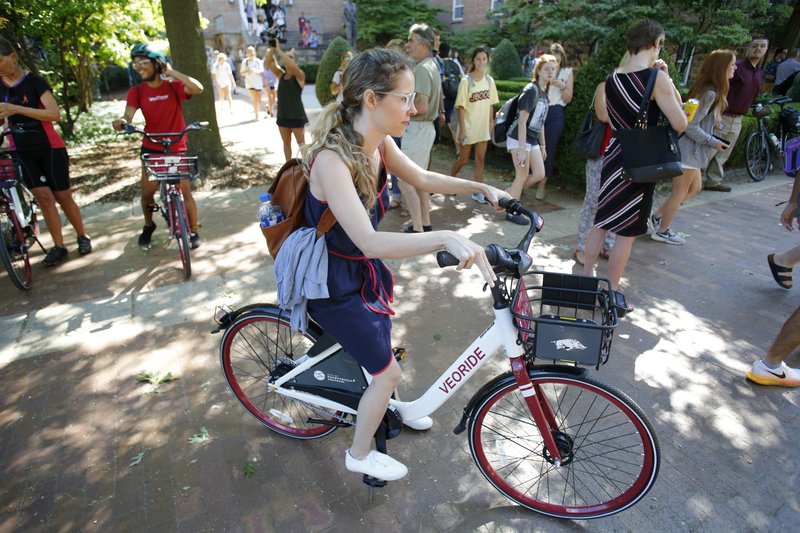 In this 2018 file photo, Misty Orpin, with Economic Development at the University of Arkansas, goes for a ride after using the VeoRide app following the ceremony officially starting the VeoRide bike sharing program on the campus in Fayetteville. ( David Gottschalk)

You may have noticed the sharp-looking signs denoting "Bicycle Friendly University" as you're walking, driving or pedaling your way onto our region's biggest campus.

But, if you're like most folks, you don't know what it takes to be officially designated bike-friendly.

So today, I'm going to explain the meaning behind those signs and how a national program has helped shape Northwest Arkansas' bike culture for the better.

The League of American Bicyclists is a national bicycle advocacy organization headquartered in Washington, D.C. The league is the oldest organization of its kind with roots all the way back to 1880. The Bicycle Friendly America program is the league's flagship program, which rates states, communities, universities and businesses. States are ranked one through fifty and all other awards are presented on a merit-based rating as bronze, silver, gold or platinum.

The program evaluates applicants on the five key components which assess bicycle infrastructure, culture and safety known as the five Es.

• Engineering -- Building safe, connected and enjoyable places for people of all ages and ability to ride.

• Education -- Providing people the knowledge, training and resources to build a cycling population with skills and confidence to ride effectively.

• Encouragement -- Fostering and growing a strong culture that welcomes and celebrates bicycling.

• Enforcement -- Ensuring safety and equity for all by protecting vulnerable road users and holding people accountable.

• Evaluation and Planning -- Establishing a clear vision and measuring progress.

The Bicycle Friendly America Program has fueled a surprising amount of progress in Northwest Arkansas. Community leaders have bought in because the program gives communities and organizations something to aim for and adds a useful element of competition.

Most importantly, the program offers structure and objectivity to what can otherwise be a haphazard assessment process.

The University of Arkansas has applied three times to the Bicycle Friendly University program. In 2014, the UA received an honorable mention, which equates to a "pat on the back" conciliation. In 2016, the UA applied again and was given a silver award, which put the school in the top 100 universities in the nation -- a big jump. And in 2019, with the addition of the VeoRide bike share program and a quadrupling of the number of campus affiliates commuting by bike, the University of Arkansans is now a gold bicycle-friendly university.

This new award puts the University of Arkansas in the top 35 universities nationally and firmly in a leadership role for the region. The integration of the five Es through better bicycle infrastructure, programming and policies is now incumbent on the UA leadership.

The upcoming overhaul of Maple Street was key in earning this gold status. This project will create a complete street and finally tie the UA campus to the Razorback Regional Greenway and better accommodate all modes of transportation.

As we imagine our region's future, I hope we can share a vision of less pollution, better health and a more connected Northwest Arkansas.

The Bicycle Friendly America program certainly won't solve our most complex problems but is just one small way we can guide our decisions and earn some kudos along the way.

After all, somebody's got to be platinum. Why not us?