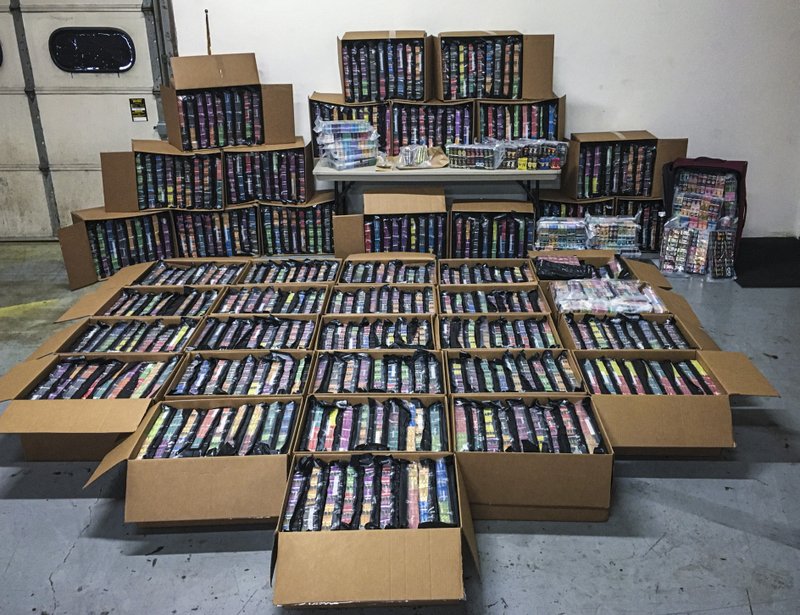 From New York City to Nebraska farm country to California, authorities have seized at least 510,000 marijuana vaping cartridges and arrested more than 120 people in the past two years, according to an Associated Press tally derived from interviews, court records, news accounts and official releases.

A Wisconsin mother, her two adult sons and five other people were charged this fall in what investigators describe as a black-market manufacturing operation that churned out thousands of cartridges a day packed with THC, the cannabis chemical that causes a high. In neighboring Minnesota, authorities said they found nearly 77,000 illicit marijuana cartridges in a man's suburban Minneapolis home and car in September.

An Alabama prosecutor has seen a jump in marijuana vaping cases in juvenile court. And in New York City, drug authorities say they've seized about 200,000 illegal cartridges since this summer, often while investigating groups suspected of trafficking in traditional-form marijuana or other drugs.

"We're putting a lot more resources in pursuing these organizations," said Ray Donovan, the special agent in charge of the Drug Enforcement Administration's New York office. "This is where the market is going. ... These criminal organizations are going to jump on whatever the business model is and try to take advantage and exploit that."

Fueled recently by alarm over a deadly lung illness that health officials have linked to illicit THC vaping, the pursuit of marijuana cartridges has added a new layer to drug enforcement while authorities are grappling with the opioid crisis and other drug issues.

Vaping rapidly gained ground in the past few years among marijuana users as a fast-acting and discreet alternative to smoking the drug. Thirty-three states have legalized marijuana at least for medicinal use, but bootleg vaping "carts" -- short for cartridges -- have cropped up there and elsewhere, selling for roughly $20 to $50 apiece.

Nationwide, the illicit marijuana vaping market is estimated to total as much as $2.5 billion this year -- roughly equivalent to the market for legal marijuana cartridges, according to cannabis market researchers BDS Analytics and Arcview Market Research.

The lung-illness outbreak raised alarms about vaping as more than 2,200 people fell ill and at least 47 died in the past nine months. Health officials have urged people to avoid vaping, particularly with black-market products containing THC, which many of the sick said they had used.

To marijuana legalization advocates, the increased focus on black-market marijuana cartridges is an argument for legalizing and regulating the drug nationally in the name of safety.

"The solution to decreasing the risk associated with THC vapor products lies in continuing towards a legalized and regulated market, not increased criminalization and arrests," said NORML Executive Director Erik Altieri.

Marijuana vaping possession cases in juvenile court have increased roughly threefold in Mobile County, Ala., in about a year, said Ashley Rich, the district attorney in the county, where marijuana remains broadly illegal. Meanwhile, she's prosecuting two people charged in September with marijuana trafficking after a seizure of 1,971 THC vaping cartridges shipped from California. Rich said they were labeled with such flavors as banana, tangelo and Girl Scout cookie.

The DEA's Donovan said he expects marijuana vaping will remain a priority for black-market suppliers and the authorities who pursue them.