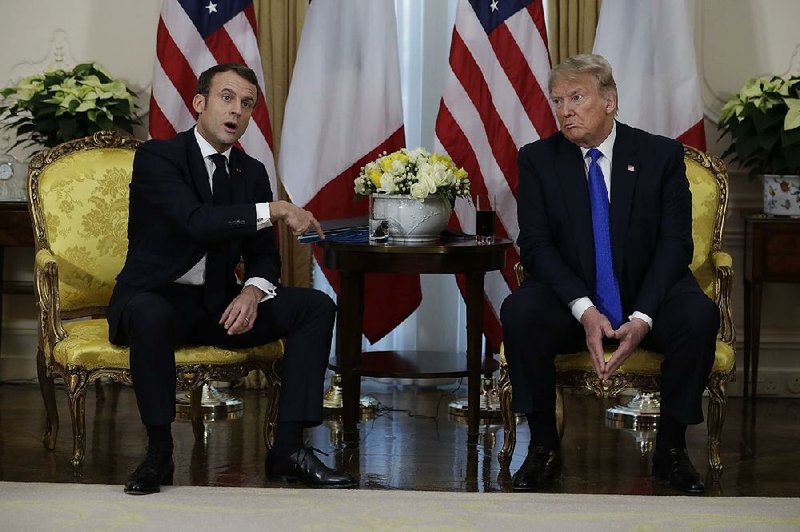 LONDON -- President Donald Trump sat down in a gilded chair beside President Emmanuel Macron of France on Tuesday as both leaders were in London to celebrate the 70th anniversary of the NATO alliance.

But by the time their 45-minute appearance at the U.S. ambassador's residence was over, the French leader had put Trump on the defensive about his vision for NATO and his handling of a military conflict involving Turkey. Macron also swatted away the president's joke about sending Islamic State fighters from Syria to France.

"Would you like some nice ISIS fighters?" Trump said, using an alternative name for the Islamic State and claiming that many fighters were from France. "I can give them to you."

"Let's be serious," Macron replied. "The very large numbers of fighters on the ground are the fighters coming from Syria, from Iraq."

[Video not showing up above? Click here to watch » https://www.youtube.com/watch?v=FYj4CX7oV2Q]

The exchange ended with Trump teasing Macron again: "This is why he's a great politician," the U.S. president said. "Because that is one of the greatest non-answers I've ever heard, and that's OK."

The tense exchange underscored how the leaders' relationship has devolved over divisions on matters such as terrorism and trade policy.

"The president doesn't like confrontation in person and doesn't quite know how to react to being on the receiving end," said Heather Conley, director of the Europe program at the Center for Strategic and International Studies. "Macron understands that. He's decided the best defense is offense."

Throughout the day, Trump spoke to reporters for over two hours in total. He criticized Democrats as "unpatriotic" for supporting a possible impeachment, commented on Prince Andrew's relationship with sex offender Jeffrey Epstein -- "tough story," Trump said of the prince, whom he claimed not to know -- and mused that he might punt on a trade deal with China until after the 2020 election.

But it was Macron who was his focus for much of the day.

In November, Macron made headlines for lamenting, in an interview with The Economist magazine, what he said was the loss of American leadership, leading to "the brain death of NATO." He said the United States under Trump appeared to be "turning its back on us," notably by pulling troops out of northeastern Syria without notice, and called on Europeans to do more in their own defense with the aim of "strategic autonomy."

But when asked during the afternoon meeting to address his earlier comments about Macron, Trump initially demurred. When it was his turn to speak, Macron was direct.

"My statement created some reactions," Macron said. "I do stand by it."

As they continued a terse back and forth, Macron targeted Trump's relationship with President Recep Tayyip Erdogan of Turkey. Erdogan has already upset NATO allies by purchasing a sophisticated Russian anti-aircraft missile system, the S-400. He is now threatening to oppose NATO's plans to fortify the defense of Poland and the Baltic countries if the alliance does not join him in labeling some Kurdish groups as terrorists.

On Tuesday, Trump would not say whether he would impose sanctions on Turkey for buying the missile system.

"When I look at Turkey, they are fighting against those who fight with us," he said. "Who is the enemy today?"

During several appearances before reporters, Trump highlighted a foreign-policy achievement he hopes will help his reelection campaign: getting allies to pay more toward the costs of running NATO.

"What I'm liking about NATO is that a lot of countries have stepped up, really, I think, at my behest," Trump said.

White House officials say that before Trump took office just four NATO members had reached the 2% benchmark set in 2014. Now there are nine, and 18 of the 29 are projected to meet it by 2024.

Stoltenberg said that Trump does deserve credit for nudging members.

"The reality is that, not least because it has been so clearly conveyed from President Trump that we need fair burden sharing, allies are stepping up," Stoltenberg said.

In his meeting with Canadian Prime Minister Justin Trudeau, Trump gently ribbed the premier -- whose country is spending about 1.3% of GDP on defense -- as "slightly delinquent."

"Some are major delinquent," said Trump. He added that he's looking at the possibility of imposing unspecified trade penalties against NATO allies that perpetually fall below benchmarks.

"Some are way below 1% and that's unacceptable, and then if something happens we're supposed to protect them and it's not really fair and it never has been fair," he said.

But Macron made clear that while he wanted more military spending by European countries, NATO had other challenges to address besides "just numbers."

"I'm sorry to say that we don't have the same definition of terrorism around the table," Macron said. Throughout the exchange, clear disagreements between the two leaders over how to deal with Erdogan's approach in Syria even overshadowed the issue of France imposing taxes on American tech giants and a potential retaliatory tariff on French wines.

Dutch Prime Minister Mark Rutte acknowledged that the French leader is right, but only to a point.

Referring to the challenges posed by Russia, or an emerging China, or even the need for Europe to play a bigger security role, Rutte said "these all require a fundamental rethink without losing the cornerstones of NATO."

But on the need for bigger military budgets, Rutte said: "We cannot have the U.S. shoulder all the burden."

The United States spends more on defense than all the other allies combined.

In the past, Trump has accused other member countries of shortchanging the United States on military spending, and he has called the alliance "obsolete," questioning whether it still served a purpose.

Ian Lesser, a former American official who directs the Brussels office of the German Marshall Fund, said that the subtext of Macron's criticism of NATO was growing doubt about Washington's commitment.

"When he says 'brain death,' Macron's talking about American leadership," Lesser said. "That's perhaps what Trump is hearing. Trump's view is that he's turned NATO around, and the rhetoric from Paris is compromising that narrative."

Experts in the region said that with Britain moving toward leaving the European Union and the German government enmeshed in its own political troubles, Macron saw an opportunity to assert French leadership in Europe.

"President Macron is seizing that moment, seeking to be disruptive in his own way, and so we will see how that works," Conley said. "He's increasingly isolating himself within Europe."

Trump and Macron appeared to have reached at least some detente by Tuesday evening: They emerged from the presidential limousine together for a reception of world leaders at No. 10 Downing St.

Information for this article was contributed by Katie Rogers and Annie Karni of The New York Times; by Zeke Miller, Aamer Madhani, Lorne Cook, Suzan Fraser, Daria Litvinova and Darlene Superville of The Associated Press; and by Ashley Parker, Philip Rucker and Michael Birnbaum of The Washington Post. 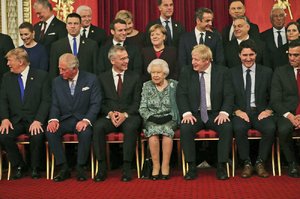 Photo by AP/YUI MOK
Britain’s Queen Elizabeth II and Prince Charles (second from left) pose for a group picture with the leaders of NATO countries during a reception Tuesday at Buckingham Palace in London.