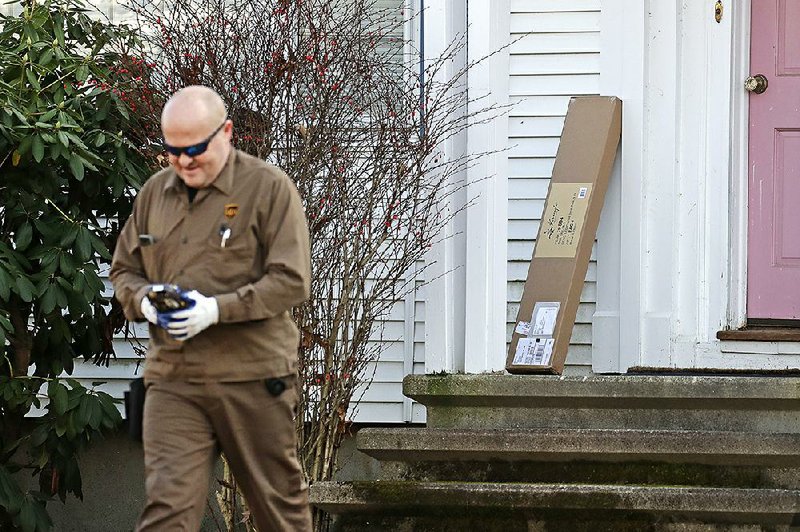 A UPS Inc. driver delivers a package in North Andover, Mass., two days before Thanksgiving. Consumers surveyed said they expect to spend an average of $1,048 over the Christmas shopping season.

A record 189.6 million consumers shopped over the long Thanksgiving weekend, up 14% from last year, the National Retail Federation said Tuesday. And for the first time, Black Friday topped Cyber Monday as the busiest day for e-commerce, though it also remained the busiest day for in-store shopping.

The trade association compiled the figures through a survey with help from Prosper Insights & Analytics. The National Retail Federation, which defines the Christmas shopping season as running from Nov. 1 through Dec. 31, has forecast total sales this year nearing $730 billion. That's a 4% increase over last year.

Matthew Shay, the industry trade group's president and chief executive officer, expressed optimism for the rest of the shopping season in a conference call with reporters. Although consumers are paying more because of tariffs on many items, he said, "they're still out shopping and behaving in a very confident way."

Consumers surveyed said they expect to spend an average of $1,048 over the Christmas shopping season on gifts, holiday decor, candy and items for themselves. The survey excludes cars, gasoline and restaurant sales.

Given the current strong economy and consumer spending patterns over the past three to six months, Shay said, "I believe we're going to continue the momentum through the season."

However, Carol Spieckerman, a retail consultant and president of Spieckerman Retail, said it's still too early to call.

"The early numbers are encouraging, but could also create false optimism," Spieckerman said. "There are just too many extenuating circumstances and variables in play this year, including a shorter selling season, erratic trade and tariff policies and overall political volatility."

Much will depend on retailers' execution of popular services like click and collect and home delivery, as well as availability of advertised items, Spieckerman said. "There will be little room for error," she said.

The survey found that 124 million people shopped in stores while 142.2 million shopped online. And 75.7 million did both.

According to Adobe Analytics, shoppers on Black Friday alone spent $7.4 billion online, with $2.9 billion, or 39%, of those sales made on smartphones. Cyber Monday figures were not yet available on Tuesday.

Those who shopped both in stores and online spent at least 25% more than consumers who shopped in only one channel, the National Retail Federation found. "The best shoppers are not those who engage exclusively online or in stores, but across all channels," Shay said.

Phil Rist, executive vice president of strategy for Prosper Insights & Analytics, said in the conference call that as stores have worked over the past few years to make their websites more mobile-friendly, "that has brought the older generations into the mobile shopping experience." Mobile devices played a significant role over the five-day period, with 75% of shoppers using them to research products, compare prices and make purchases -- up from 66% last year.

And though ShopperTrak found traffic to stores down 6.2% from last year, the survey showed that younger consumers are returning to in-store shopping. Department stores made a particularly strong showing, Shay said, bucking a trend of recent years.

While Shay said department stores have made "substantial investments in delivering great value to customers," he attributed the phenomenon to a nostalgia factor among shoppers 18 to 34. Although they grew up in the digital age, he said, the lights, music and festive decorations in stores likely trigger positive childhood memories for them.

The survey of 6,746 adult consumers was conducted Wednesday through Monday.