No hurry for China deal before vote, Trump says

Also not fretting over stocks, he states by Compiled by Democrat-Gazette staff from wire reports | December 4, 2019 at 7:03 a.m. 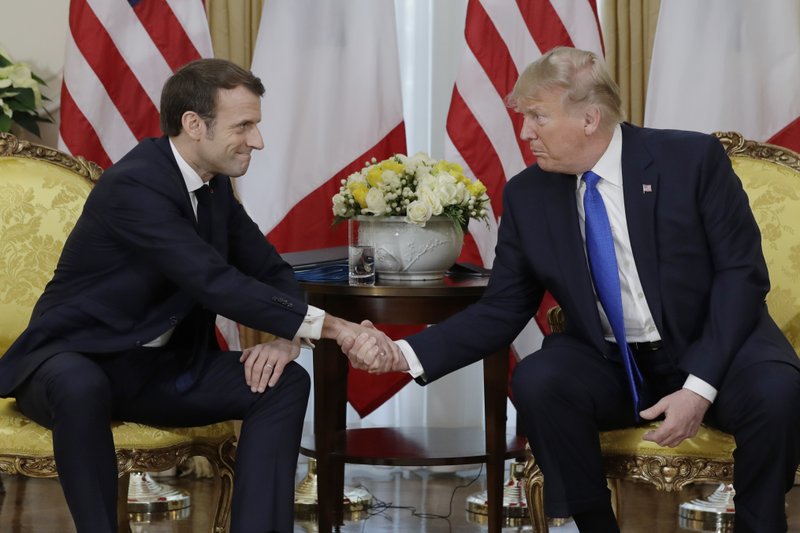 LONDON -- President Donald Trump on Tuesday downplayed the likelihood of reaching a U.S.-China trade deal before next year's elections -- and then shrugged off the tailspin that his remarks caused in the stock market.

Speaking in London, where he is attending a NATO summit, Trump said he had "no deadline" to end the 16-month trade war between the world's two largest economies, which has caused economic damage for both sides.

"In some ways I like the idea of waiting until after the election," Trump said.

The president has previously suggested that China wanted to wait until after the election to negotiate a deal.

[Video not showing up above? Click here to watch » https://www.youtube.com/watch?v=0Q_Wiv5O2fg]

Later, Trump dismissed the tumult on Wall Street, choosing instead to highlight how much stock prices have risen since the start of the year.

"We have picked up record numbers in our stock markets, so that's OK. That's the way I feel," Trump replied to questions from reporters.

The trade negotiations with China, the president declared, are at a "critical stage."

On Dec. 15, additional U.S. tariffs are set to kick in on many Chinese-made items, including smartphones and toys. The Trump administration is already taxing more than $360 billion worth of Chinese imports. China has counterpunched by taxing $120 billion in U.S. imports.

Administration officials had previously suggested that the December tariffs could be canceled if the two sides concluded a trade deal. But sticking points remain -- including whether Trump will remove any of the tariffs already in place. If he proceeds with the December round, the United States would essentially be taxing every shoe, television and laptop that China sends into the United States and risking more retaliation.

The Trump administration insists that China must offer more concessions to protect intellectual property and open its markets to U.S. companies, while China is demanding more relief from Trump's tariffs in return for such concessions.

Pressure is building on both sides to complete what Trump has called a limited "Phase 1" deal before the deadline. Still, Trump could end up postponing the tariffs, as he did in October, to allow more time for negotiations.

Commerce Secretary Wilbur Ross, speaking on CNBC television Tuesday, said the U.S. will go ahead with its plan to add tariffs on Chinese products if nothing changes come mid-December.

"There is always the chance of a breakthrough," he said, adding that while talks continue between the two sides, there's no big meeting scheduled.

Heightening concern that negotiations for a near-deal will drag out was a report from Chinese state media indicating the government would soon publish a list of "unreliable entities" that could lead to sanctions against U.S. companies.

The latest barrage of bearish trade news started before sunrise in Washington on Monday, when Trump tweeted unexpectedly that he's imposing tariffs on steel and aluminum imports from Brazil and Argentina for what he called their "massive" currency devaluations. Later in the day U.S. Trade Representative Robert Lighthizer announced plans for tariffs on $2.4 billion of imports from France as retaliation for a new tax that hits American tech companies.

Tucked between those pronouncements was a widely overlooked statement that Lighthizer was contemplating increasing the scope of tariffs levied against the European Union over illegal Airbus subsidies after a World Trade Organization ruling.

In less than two days, investor optimism that Trump's dovish trade advisers were winning the internal White House debates started to fade as the president's more hawkish instincts reemerged. Underpinning his actions are an apparent belief that his import taxes are having a positive effect.

U.S. and Chinese officials have remained fairly optimistic that a deal will be struck before the December tariffs take effect, but they say the final decision will fall to Trump and Chinese leader Xi Jinping.

Chinese officials have increasingly tried to look past Trump's day-to-day remarks about the negotiations and have focused on trying to obtain the best deal they can from Lighthizer and Treasury Secretary Steven Mnuchin. But the president's remarks continue to receive attention on Chinese social media and are followed closely in financial markets around the world.

The mid-December tariff deadline is of particular concern for tech investors wondering whether Apple will receive an exemption from the next wave of levies, Daniel Ives of Wedbush Securities wrote in an analyst note. Trump's trade policies with China have jostled Apple's stock price.

The lack of a trade agreement leaves Apple products, including the iPhone, vulnerable to other restrictions. (In September, the White House exempted certain Chinese-made components used in the Mac Pro from the tariffs.)

"While this is all a game of high stakes poker between the U.S. and China as they head to a likely Phase 1 agreement on the tariff talks, Apple continues to be in the crossfire given its flagship iPhone manufacturing footprint in China," Ives wrote.

Information for this article was contributed by Zeke Miller, Kevin Freking and Paul Wiseman of The Associated Press; by Brendan Murray, Jenny Leonard, Shawn Donnan, Jordan Fabian and Derek Wallbank of Bloomberg News; by Katie Rogers, Keith Bradsher and Ana Swanson of The New York Times; and by Rachel Siegel of The Washington Post.