Corps of Engineers colonel, port executive give update on system at LR talk by Emily Walkenhorst | December 4, 2019 at 3:44 a.m. 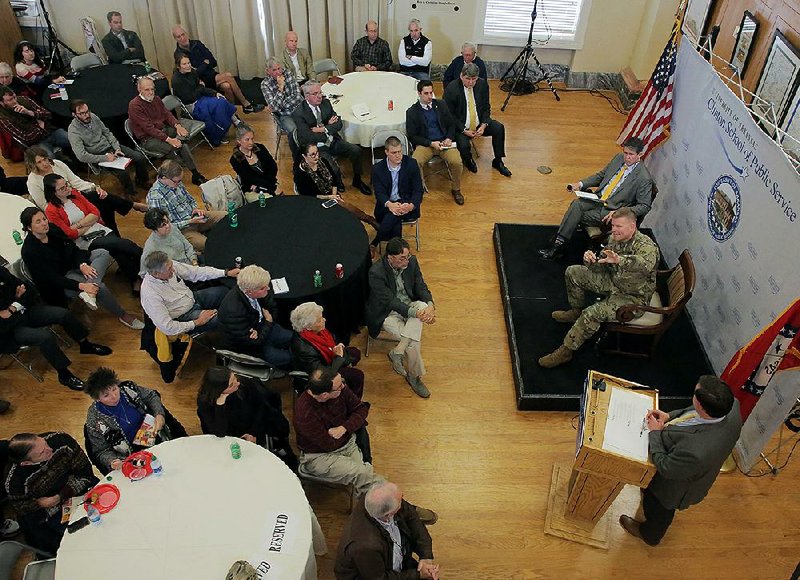 Col. Eric M. Noe (seated, right), with the U.S. Army Corps of Engineers Little Rock district, said Tuesday in Little Rock that figuring out how to get levees into better shape is “a complex problem for the state.” ( John Sykes Jr.)

Levees along the Arkansas River need $105 million in repairs after historic spring flooding and, in some cases, years of neglect.

That's the figure Col. Eric Noe of the U.S. Army Corps of Engineers' Little Rock district gave a crowd Tuesday at the University of Arkansas Clinton School of Public Service.

Noe and Little Rock Port Authority Executive Director Bryan Day were the featured speakers at Tuesday's talk, "The Economic Importance of Levees and an Update on the Historic 2019 Flood."

The flood started after the Corps began releasing water from reservoirs in Oklahoma after torrential rains quickly filled them. Noe said that as much as 20 inches fell in some places and that 400% to 600% of average monthly rain fell in a span of less than two weeks.

During the two-week flood in Arkansas, one person died after driving around a barricade into water, and several levees were overtopped or breached. Nearly two dozen levees along the river were in "unacceptable" condition before the flood, leaving them out of the Corps Rehabilitation and Inspection Program. That renders those communities largely unable to access federal assistance to repair any damage.

Gov. Asa Hutchinson has set aside $10 million to repair levees in the state. That's a far cry from the $105 million the Corps estimated for all Arkansas River levees, although many levee districts raise varying amounts annually through millages that are paid by property owners protected by their levees.

The Corps is to receive only $10 million for six levees that it operates along the river.

Still, damage to levees and the areas they protect could have been worse, Noe said.

"We were very fortunate that the levee system was able to do what it did," limiting fatalities and catastrophic city infrastructure damage, Noe said.

The nation's and Arkansas' economies still took hits from nearly two months of halted commercial river traffic, Day said. Because the river still isn't open to all of the usual barge traffic, Day said, the economies are still suffering.

Welspun Tubular, for example, can't ship its pipe by boat right now, Day said. The company can ship by train at a higher cost, and it cannot ship by truck.

A lot of work must be done to avoid similar or worse situations in the future, especially as the state's population grows and more land is developed, they said.

"We've got to fund our infrastructure," Day said.

The McClellan-Kerr Arkansas River Navigation System, while suffering immense damage, is the nation's newest. It was completed in 1970. A lot of infrastructure, including the levee that protects the Port of Little Rock and other river navigation systems, is older and in worse shape.

Day said the flood gate on that levee broke, leaking water into the port. Workers from several agencies had to block the rush of water before it could knock out a major city wastewater-treatment plant.

Figuring out how to get Arkansas' levees into better shape is "a complex problem for the state," Noe said. The vast majority of levees are not a part of the Corps' program, and most are agricultural levees owned by farmers who couldn't afford to get them up to Corps standards anyway, he said.

More flood mitigation, such as building more reservoirs, could help ease the heavy flow of water down the river in the future, Noe said.

"But who are you going to ask to give up their land?" he said.

After an audience member asked how the government can prevent people from building too close to levees or water bodies, Day said such an issue treads into the contentious territory of the government's role in society versus property rights.

The best way to handle people building too close to water may be to remove the federal government from assisting those property owners if their homes or businesses flood.

"If you own land, you don't want anyone to tell you what you can do with it," Day said.

Letting people build at purely their own risk, rather than the risk and expense of taxpayers, may be the way forward for government, he said.

Currently, the National Flood Insurance Program pays out billions of dollars to those who purchase it. Many of those property owners rebuild in the same spot that flooded. Flood insurance rates have increased over the years to cover worsening disasters, and many members of Congress have proposed revamping the program to control costs and expenditures. 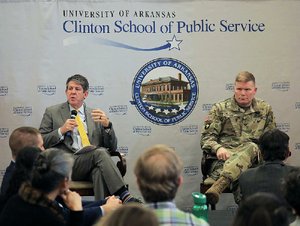