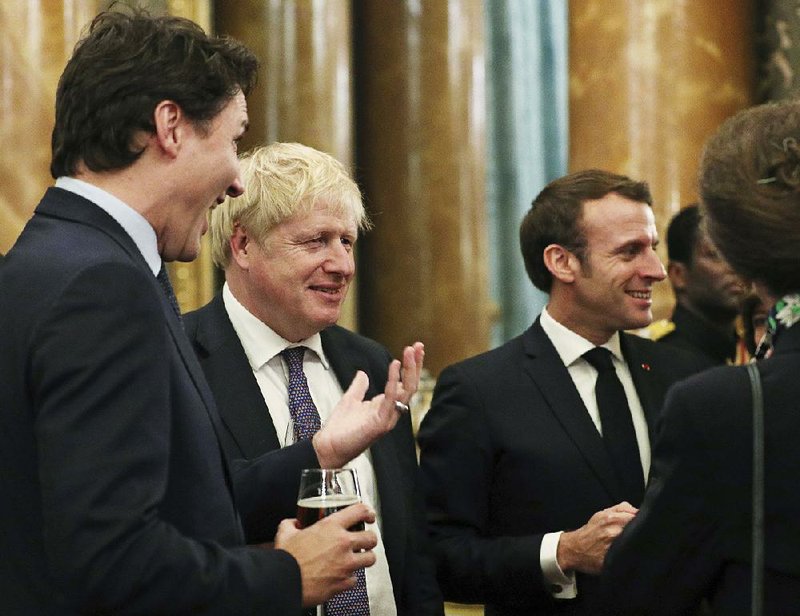 Trump's sparring with Canadian Prime Minister Justin Trudeau and French President Emanuel Macron exposed the alliance's divisions on defense spending and relations with Turkey, as well as the U.S. leader's own unconventional ways on the world stage.

A day after Trudeau was overheard appearing to gossip about Trump during a reception at Buckingham Palace, Trump called the Canadian leader "two-faced." Trump and Trudeau had met earlier on Tuesday.

In an unguarded conversation, Trudeau was heard telling leaders, including Macron and British Prime Minister Boris Johnson, that he was late "because he takes a 40-minute press conference off the top," an apparent reference to Trump. Trudeau also said, seemingly in reference to his meeting with Trump: "You just watched his team's jaws drop to the floor."

[Video not showing up above? Click here to watch » https://www.youtube.com/watch?v=q-YLrPITJF0]

Trump fired back during a Wednesday afternoon meeting with German Chancellor Angela Merkel. He suggested that the Canadian's overheard comments were precipitated by Trump's decision to highlight the fact that Canada falls short of the NATO target of spending 2% of its gross domestic product on defense.

"Well, he's two-faced," Trump said of Trudeau. "And honestly, with Trudeau, he's a nice guy. I find him to be a very nice guy. But, you know, the truth is that I called him out on the fact that he's not paying 2%, and I guess he's not very happy about it."

Trudeau on Wednesday explained his Buckingham Palace comments by telling reporters that he had been referring to Trump's announcement that he would host the next Group of Seven summit at Camp David, which the Canadian leader thought surprised White House aides.

Trump had initially proposed his own Doral golf resort in Miami for the next G-7, but he abandoned that idea after facing allegations of self-dealing.

Trudeau said he was "pleased" to recount the Camp David moment to fellow leaders and that Canada's relationship with the United States remained "extraordinarily important and effective."

The spat came after a day dominated by fissures in the Trump-Macron relationship. Before they met on the sidelines of the summit, Trump criticized the French president for what he called "very, very nasty" comments to The Economist about NATO's health.

Meanwhile, NATO Secretary-General Jens Stoltenberg trumpeted what he said was a successful NATO meeting. He argued that the disagreements among some leaders were not a challenge to NATO's fundamental "all for one, one for all" mission.

"Disagreements will always attract more attention than when we agree," Stoltenberg told reporters. "The strength of NATO is that we have always been able to overcome these differences and then unite around our core task to protect and defend each other."

The leaders announced that they would set up a commission of experts to study political decision-making, and agreed to "a forwarding-looking reflection process" to be led by Stoltenberg. Details were sketchy, but the commission, "drawing on relevant expertise," would study ways "to further strengthen NATO's political dimension including consultation."

Germany and France had both put forward similar schemes, although Macron riled many allies with his pre-summit remarks and NATO officials have pointedly suggested that they were more impressed by Berlin's proposal.

After three summits in consecutive years, the leaders decided that they would take a year off and meet again in 2021. That means there won't be another one until after the next presidential election in the United States.

Johnson -- also busy with a divisive British election campaign -- was upbeat, saying "there was a mood of very great solidarity and determination and a willingness to push NATO forward, not just for the next few years but for the next 70 years."

While NATO leaders emphasized unity, Trump convened his own subgroup of the alliance -- limited to only those meeting the defense spending target. "We call them affectionately those two percenters," he said. "So this is a lunch that's on me."

Trump said Tuesday that much more needs to be done.

Johnson said that on Wednesday "country after country pledged or gave an account of how they were going to meet the pledge of 2%."

Earlier Wednesday, Trump sat down with Turkish President Recep Tayyip Erdogan as European leaders, led by Macron, pushed the alliance to get tough on Turkey after its October invasion of Syria and its purchase of Russian surface-to-air missiles.

Trump has resisted some of those efforts to pressure Erdogan -- a point of tension exposed Tuesday during exchanges with the French leader.

The White House, which confirmed the meeting after Erdogan's office posted a photo of the leaders on social media, said the pair discussed "the importance of Turkey fulfilling its alliance commitments" as well as security and economic issues.

The sessions come as Trump canceled a formal news conference scheduled for the conclusion of the summit, saying he scrapped the event because he had already held many long exchanges with reporters.

The gathering of NATO leaders follows Trump's frequent criticism of alliance members as falling well short in doing their financial part through the first three years of his presidency. 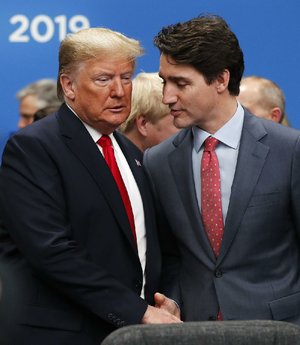 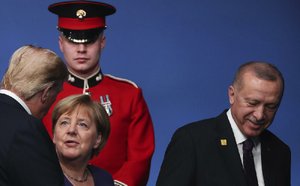 Photo by AP/FRANCISCO SECO
President Donald Trump speaks with German Chancellor Angela Merkel at a NATO event Wednesday in Watford, England. Trump also met with Turkish President Recep Tayyip Erdogan (right) as other leaders pushed for a tough response to Turkey over its actions in Syria and a missile deal with Russia.