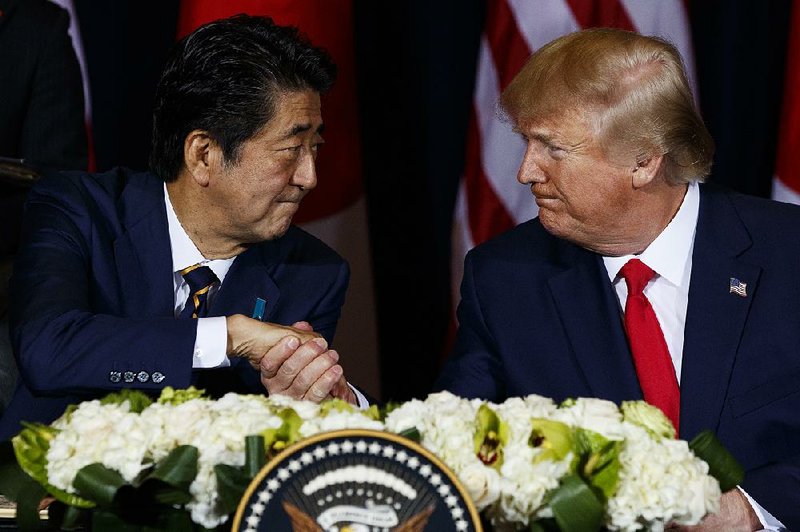 Japanese Prime Minister Shinzo Abe and U.S. President Donald Trump meet in September in New York where they signed a trade agreement that was ratified Wednesday by Japan’s Parliament.

TOKYO -- Japan's parliament on Wednesday approved a trade deal that was agreed upon by President Donald Trump and Japanese Prime Minister Shinzo Abe earlier this year.

The deal to cut tariffs between the countries takes effect at the beginning of next year. It cleared Japan's upper house Wednesday after clearing the more powerful lower house earlier.

Some critics say the deal is more advantageous to the U.S. since a 2.5% tariff on Japanese automobiles remains.

The deal will pave the way for cheaper American beef and other agricultural products in Japan.

Trump previously withdrew from the Trans-Pacific Partnership agreement, negotiated by the Obama administration.

U.S. farmers have felt they were at a disadvantage compared with Australian or Canadian counterparts.

The U.S. and Japan have agreed to continue talks on trade, and the auto tariffs are likely to come up in the talks.

The Japanese auto industry is a key part of the U.S. economy, although the manufacturers, such as Toyota Motor Corp. and Honda Motor Co., have moved production abroad to avert tariffs and become part of American business.

When the trade deal was reached in September, Trump said it meant opening Japan's market to about $7 billion in U.S. farm goods, with tariffs lowered or scrapped on American beef, pork, wheat, cheese, corn and wine.

Abe has called the deal a "win-win," prompting criticism from the opposition. Japanese farmers form a large support base for Abe's ruling Liberal Democratic Party. Japan has long had protectionist policies on agricultural imports, especially rice.

Trump was eager to make a deal with Japan to appease U.S. farmers whose access to the Chinese market has been constrained as a result of his trade war with Beijing.

The threat of punitive tariffs on the exports of cars and car parts, a $50 billion-a-year sector that is a cornerstone of the Japanese economy, pushed Abe to accept two-way trade talks with the U.S. after he failed to persuade Trump to return to the Trans-Pacific Partnership.

A second pact that was approved simultaneously aims to provide a legal foundation for smooth digital trade between the world's largest and third-largest economies. It bans both countries from imposing tariffs on products distributed electronically, such as software and games.

Japan's Cabinet Secretariat calculated that the two-way deal would bolster its real gross domestic product by 0.8%, but its calculations were based on the assumption that existing tariffs on Japanese car exports to the U.S. would be removed. Domestic agricultural production was set to fall by between $552 million and $1 billion, according to the same calculations.

The two sides are set to enter preliminary talks on a second round of trade negotiations after the deal goes into force, with Japan saying it still hopes to get existing car tariffs removed.

Information for this article was contributed by Yuri Kageyama of The Associated Press and by Jon Herskovitz and Isabel Reynolds of Bloomberg News.