Lawmakers get scholars' take; witnesses at odds on legitimacy to impeach 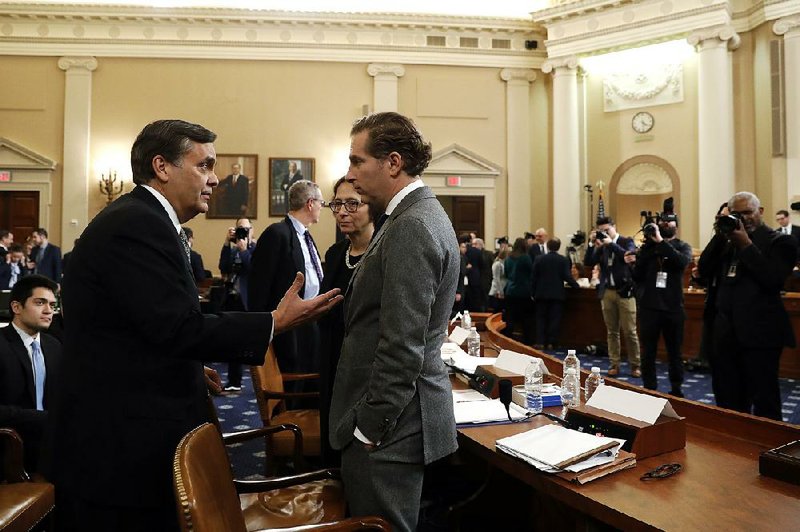 WASHINGTON -- Three constitutional scholars summoned by Democrats testified Wednesday that President Donald Trump's conduct toward Ukraine rises to the level of impeachment, as the inquiry moves to a new phase with the first hearing by the House Judiciary Committee.

However, a Republican-summoned constitutional scholar who testified Wednesday cautioned against impeachment.

The focus of the impeachment probe has shifted from the House Intelligence Committee, which voted along party lines Tuesday to approve a 300-page report that concluded that Trump had "compromised national security to advance his personal political interests."

At the heart of the Democrats' case is the allegation that Trump tried to leverage a White House meeting and military aid, sought by Ukraine in the face of Russian military aggression, to pressure President Volodymyr Zelenskiy to launch investigations of former Vice President Joe Biden and Biden's son Hunter, as well as a theory that Kyiv conspired with Democrats to interfere in the 2016 presidential election.

[Video not showing up above? Click here to watch » https://www.youtube.com/watch?v=GvsC38c3a6A]

"Never before in the history of the republic have we been forced to consider the conduct of a president who appears to have solicited personal, political favors from a foreign government," said Rep. Jerrold Nadler, D-N.Y., as he gaveled open the House hearing.

Nadler said Trump's phone call seeking a "favor" from Zelenskiy wasn't the first time he had sought foreign help to influence an American election, noting Russian interference in 2016. He warned against inaction with a new campaign underway.

"We cannot wait for the election," he said. "If we do not act to hold him in check, now, President Trump will almost certainly try again to solicit interference in the election for his personal political gain."

Nadler argued that there was ample "precedent for recommending impeachment" on the grounds of obstruction of justice and obstruction of Congress, noting that President Richard Nixon had given Congress recordings during his impeachment, and "former President [Bill] Clinton his blood." (Clinton provided a blood sample during the investigation that ultimately led to his impeachment.)

Trump's "level of obstruction is without precedent," Nadler argued.

The legal experts were at odds over whether Trump had broken written laws and whether the courts have to weigh in before Congress can legitimately conclude that he is guilty of high crimes and misdemeanors.

Turley argued that the evidence against Trump falls short of proving that he committed an act of bribery, and that Democrats should have taken their subpoenas to the courts to enforce before launching impeachment proceedings.

Gerhardt rejected the latter argument, saying Trump's "refusal to comply with the subpoenas is an independent event that is apart from the courts."

"It's a direct assault on the legitimacy of this inquiry," he said.

Feldman, meanwhile, argued that Turley's point about bribery discounted the fact that the Constitution is the highest law in the land, and it defines bribery as a crime.

"If the House believes that the president solicited something of value, then that would constitute bribery under the meaning of the Constitution, and it would not be lawless," Feldman said.

Turley disagreed, arguing that it was a "circular argument to say 'well, the Constitution is law.'"

"It doesn't define the crime, it references the crime," he said.

Turley warned House Democrats against moving too fast on impeachment, moving ahead on a partisan basis and moving to oust Trump on a "narrow" set of issues focused only on Ukraine. "Impeachments require a certain period of saturation and maturation," Turley told lawmakers. "That is, the public has to catch up."

In response to a question about whether Trump committed bribery, Gerhardt and the other experts invited by the Democrats agreed that he did.

"I just want to stress that if what we're talking about is not impeachable, then nothing is impeachable," Gerhardt said. "This is precisely the misconduct that the framers created a Constitution including impeachment to protect against."

Gerhardt added that if Congress takes "no action, if Congress concludes they're going to give a pass to the president here ... every other president will say, 'OK, then I can do the same thing,' and the boundaries will just evaporate."

He called this possibility a "danger to all of us."

"Because this is an abuse that cuts to the heart of democracy, you need to ask yourselves, if you don't impeach a president who has done what this president has done ... then what you're saying is, it's fine to go ahead and do this again," Karlan said. "It's your responsibility to make sure that all Americans get to vote in a free and fair election next November."

Karlan sought to distinguish a president from a king after Rep. Sheila Jackson Lee, D-Texas, prompted her to articulate how Trump's power is different from a monarch's, if at all. The president has said Article II of the Constitution allows him to do, essentially, whatever he wants.

Karlan said that is not so, pointing out that the Constitution says there can't be any noble titles in the U.S.

"While the president can name his son Barron, he can't make him a baron," she said.

Questioning the witnesses, Democrats hinted at articles of impeachment that could be taken forward in public as soon as next week. They included abuse of power and bribery related to the Ukraine matter and obstruction of justice stemming from the findings of Robert Mueller, the former special counsel who investigated Russian election interference.

They also appeared to be building a case to charge Trump with obstruction of Congress for his refusal to allow aides to testify in the impeachment inquiry and a blockade on documentary evidence requested by the House.

Republicans on the panel sought to portray the case as a political hit job. And they disputed that Democrats had proved that Trump directed a pressure campaign on Ukraine.

"This may be a new time, a new place, and we may be all scrubbed up and looking pretty for impeachment," said Rep. Doug Collins, R-Ga. "This is not an impeachment. This is simply a railroad job, and today is a waste of time."

Trump, in Britain for the 70th anniversary of NATO, called impeachment "a dirty word that should only be used in special occasions."

Asked about that, Trump told reporters that he doesn't know why Giuliani was calling the White House Office of Management and Budget, which was withholding the military aid to Ukraine.

"You have to ask him," Trump said. "Sounds like something that's not so complicated. ... No big deal."

The Judiciary Committee is expected to convene one to two more hearings before it begins drafting and debating articles of impeachment.

Meanwhile, House Speaker Nancy Pelosi and Intelligence Committee Chairman Adam Schiff on Wednesday held a closed meeting at the Capitol, according the multiple Democratic lawmakers who were in attendance.

Pelosi announced no firm decision or timeline in moving toward Trump's impeachment, but she made clear what lay ahead in the House, the lawmakers said.

"Are you ready?" Pelosi, D-Calif., asked her colleagues, according to reports.

The caucus, according to multiple members, responded with shouts of approval.

"We're moving forward," said one member, summarizing the thrust of Pelosi's remarks and speaking on condition of anonymity to candidly describe the private meeting. "We've got a job to do whether people want to testify or not."

Pelosi then turned the room over to Schiff, D-Calif., who received a standing ovation.

Schiff proceeded to run through the major findings of the report that was released Tuesday, to add context to some of the key events the inquiry has uncovered and to explain to colleagues why, among other things, he did not wait for additional witnesses -- such as former national security adviser John Bolton, who met with Trump to discuss Ukraine policy -- before issuing his report.

Schiff referred to a recent New York Times editorial that encouraged Democrats to slow down and use the courts to force testimony from Bolton and others. He countered that the courts have been too slow in upholding congressional subpoenas.

In a separate closed meeting elsewhere in the Capitol basement, Vice President Mike Pence rallied Republicans against impeachment -- encouraging the GOP rank-and-file to "turn up the heat" on House Democrats and accuse them of focusing on impeachment instead of solving America's problems.

Pence praised Republicans for sticking together and defending the president, telling them he and Trump were proud of their work standing up for the president. He also criticized Pelosi and House Democrats for what he called shameful behavior -- not just for impeaching Trump, but claiming that the Democrats had turned a blind eye to other issues that affect people's everyday lives.

"The vice president was clear that he was proud of how the House Republicans have stood together on the impeachment inquiry but wanted to remind us that in our discussions back home, we need to talk about things that are not happening because House Democrats are consumed with impeaching the president," said Rep. Steve Womack, R-Ark., pointing to legislation to curb prescription drug costs and a pending trade agreement with Canada and Mexico.

Several GOP leaders exited the meeting talking about those "opportunity costs" of impeachment.

"They are not bringing bills to the floor that the president would sign," said House Minority Whip Steve Scalise, R-La. 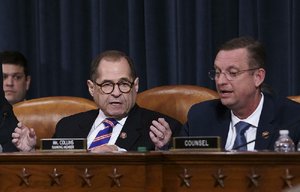 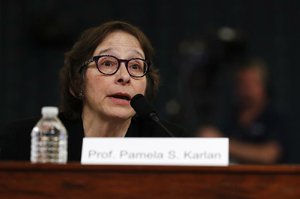 Photo by AP/JACQUELYN MARTIN
Pamela Karlan of Stanford Law School apologizes Wednesday after using President Donald Trump’s son, Barron, in explaining how a U.S. president is different from a monarch under the Constitution. “While the president can name his son Barron, he can’t make him a baron,” she said. The remark drew rebukes from the White House and Melania Trump. 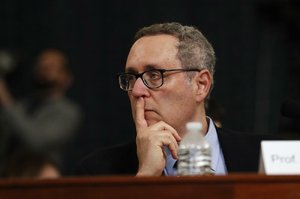 Photo by AP/JACQUELYN MARTIN
Michael Gerhardt of the University of North Carolina Law School called Trump’s refusal to comply with subpoenas “a direct assault on the legitimacy of this inquiry.” 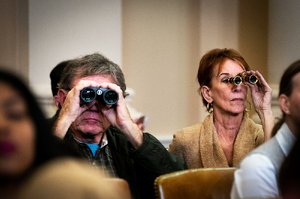 Photo by The New York Times/ERIN SCHAFF
Spectators get a view of the testimony Wednesday during the House Judiciary Committee hearing.

Print Headline: Lawmakers get scholars' take; witnesses at odds on legitimacy to impeach