Converting advisory group to transition entity gets a look, but no action taken by Cynthia Howell | December 5, 2019 at 7:01 a.m.

Arkansas Board of Education members explored ideas Wednesday regarding the future of the state-controlled Little Rock School District, including one to convert the district's existing Community Advisory Board into "a transition" school board with some decision-making authority prior to a school board election in November.

The seven Education Board members present took no votes but left a three-hour work session with expectations that:

• Any number of motions and possible decisions will be made regarding the future operation of the Little Rock system when the state Education Board holds its regular monthly meeting Dec. 12-13.

• The Little Rock district will continue to be classified under the state's accountability system as Level 5 -- in need of intensive support -- until the district, which currently has eight F-graded schools, can meet state-set exit criteria.

• A number of restrictions would be placed by the state Education Board on the decision-making authority of the local school board until the district exits Level 5.

One of the first actions of such a transition board would be to appoint someone to fill a seventh, now vacant, seat on the board, Key said.

"If you do come up with a motion, be sure to flesh it out," Education Board Chairman Diane Zook of Melbourne and Little Rock advised her colleagues about possible action on the Little Rock district at next week's board meeting. "Say 'Here is my reasoning behind it;' 'Here are my thoughts.' That way it will be more helpful if we are going to make a decision on the spot, or at least it will be for me."

Any decisions made about the future governance and operation of the capital city school system come in advance of the Jan. 28, expiration of the five years that the state can control the district before it is obligated to consolidate or annex it to other districts or otherwise reconstitute it -- a term not defined in state law.

The state took over the Little Rock district in January 2015 -- dissolving the school board and placing the superintendent under state direction -- when six of the district's then 48 schools were classified by the state as academically distressed because of chronically low math and literacy test scores.

School accountability laws and student testing programs have changed over the years but the district has eight schools that received F letter grades this year based on results from the ACT Aspire exams given students last spring, and on other factors including academic growth over time, student attendance and high school graduation rates. As a result, the state Education Board has spent the past few months working to craft a plan to "reconstitute" the district.

In October, the Education Board approved a plan for a November 2020 election of a nine-member school board that would have limits on its authority.

Education Department staff members late last month drafted a follow-up memorandum of understanding that detailed what those board limits might be.

That draft proposed establishing "community schools" that would be developed and operated by a partnership of state, district and city representatives. The draft memorandum called for the district and state to develop new criteria for the district's exit from Level 5 intensive support. And the draft proposed prohibiting the reinstatement of collective bargaining and reserving for the state the authority to hire and fire the superintendent, as well as aiding the district in its budgeting.

Education Board member Chad Pekron of Bryant objected in November and again Wednesday to the terms of the draft memo, saying Wednesday that "My goal is not to have micromanagement but ... to have a few ... guidelines [that] are intended to be in place for stability purposes."

He said those would prohibit the transition and elected school boards from changing superintendents, reinstating the recently revoked collective bargaining rights to the Little Rock Education Association employee union and suing anyone without the state board's permission. He said the limitation on litigation was meant to ensure that the district is focused on getting out of Level 5 rather than on suing anyone.

Zook told Pekron that she didn't view following state law that dictates a specific responsibility to be micromanagement.

Pekron said there were elements in the draft memorandum that he believed are great but it isn't necessary for the Education Board to mandate them. He said it is important for the state to really turn back the day-to-day governance to the district.

Key said any restrictions placed on the Little Rock district by the Education Board would ultimately have to be released or removed by the board and not the commissioner.

Key also observed that the draft memorandum of understanding -- a proposed agreement among parties -- would become moot, replaced by the directives of the board.

In response to questions from Education Board members, Key and Mike Hernandez, state superintendent of coordinated support and service, described how the district and state have worked collaboratively to establish operating systems in terms of employment, staff evaluations and training, student achievement and finances.

"To me the things you have outlined may have an impact on student learning but they don't directly affect student learning," Zook said, adding that she remains concerned about students and the effects of student and teacher absenteeism and less-than-assertive teacher hiring practices by the district.

Board member Ouida Newton of Leola questioned whether the Education Board should impose a guideline about evaluation and training of principals and teachers.

Board member Sarah Moore of Stuttgart noted that the district's secondary schools are the more likely schools to receive F letter grades but that the root of poor achievement is at the elementary schools. She questioned whether the state Education Board should take steps to ensure that academic progress continues at Hall High, where students have met growth goals in the past two years but the campus still holds an F grade from the state

Moore said not all problems affecting student achievement can be resolved between 8 a.m. and 3 p.m.

Pekron said he is comforted by the fact that the district remains a Level 5 district and must prepare and comply with school improvement plans and district plans of support -- which are supervised by the state.

"What we found were system deficiencies," Key said about the Little Rock district. "The goal of Act 930 of 2017 [the school accountability law] is to fix those deficiencies in the systems. It is not to fix everything wrong in the district. If we get the systems operating more effectively -- or in some cases have systems put in place -- then we have prepared the district to be successful when it goes back to an elected board."

In the past 18 months Key said he has seen an acceleration of the progress to get the district to a place where it has effective systems.

The district is better in terms of teacher evaluations and student achievement on interim tests than it was doing last year and he said he believes next year will be better than this year.

Key praised the work of the district's recently reorganized administrative team. And Hernandez was complimentary of the quality of the school improvement and district support plans.

The processes in place will aid the district in exiting Level 5, Key said, adding that "you don't get fruit from a peach tree in the first couple of years."

"State takeover can't fix everything but it can get it on the path. Is the ball moving at a speed that it will keep moving? I feel more confident than I did a year ago." Key said.

Unlike other meetings on the topic, there were only about a dozen members of the public at the work session that also addressed proposed changes in high school attendance zones and a recent study of the district's administrative organization.

Parent activist Ali Noland said after the meeting that she objected to Pekron's proposed restriction on the district's ability to enter into litigation.

She also questioned why the state Education Board was delving into the attendance zone changes -- a measure she said should be decided by Key, who acts in place of a locally elected board in the state-controlled system in regard to deciding policy, budgets and personnel matters.

"The proposed restriction on litigation is really troubling," Noland said. "I'm not aware of any precedent for one branch of government preventing an elected governing body from accessing a separate branch of government. It seems illogical that LRSD would have to ask the state board's permission if we want to sue them to try to end the state takeover." 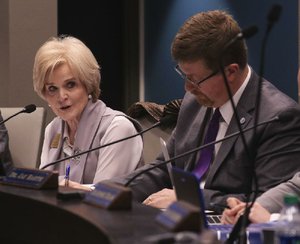 Photo by Staton Breidenthal
Education Board Chairman Diane Zook (left) is shown with Johnny Key in this 2018 file photo. 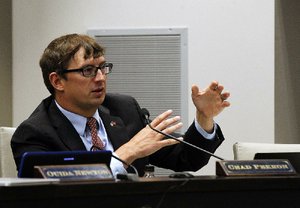 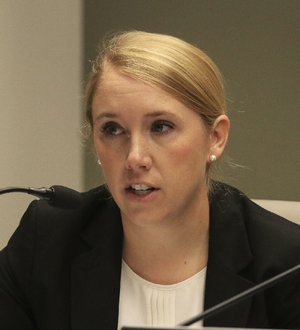 Photo by Staton Breidenthal
State Board of Education member Sarah Moore of Stuttgart speaks during a board meeting in this file photo. 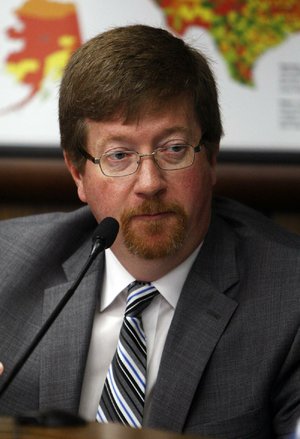