Bassey still a force for WKU 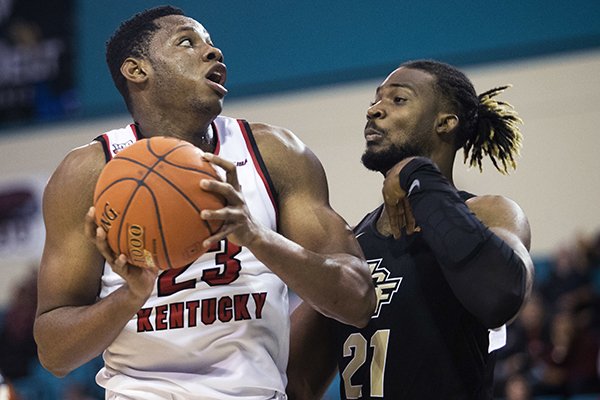 FAYETTEVILLE -- Western Kentucky center Charles Bassey was a force inside for the Hilltoppers when they beat the University of Arkansas 78-77 at Walton Arena last season.

The 6-11 Bassey had 21 points, 9 rebounds and 5 blocked shots, including rejecting a driving attempt by Jalen Harris in the final seconds as the Hilltoppers held on to win.

Bassey, who also had an assist on Western Kentucky's game-winning basket, put together those numbers with Arkansas having an elite big man of its own in 6-11 Daniel Gafford.

Gafford entered the NBA Draft rather than return to Arkansas for his junior season and was a second-round pick by the Chicago Bulls.

[Video not showing up above? Click here to watch » https://www.youtube.com/watch?v=147bTB94jLY]

Bassey also declared the draft and went to the NBA Scouting Combine, but he didn't sign with an agent and withdrew from the draft to return to Western Kentucky for his sophomore season.

Now the Razorbacks have to face Bassey without Gafford.

"Bassey creates a lot of problems inside because of his size and he runs the floor really well," Razorbacks Coach Eric Musselman said. "Coach [Rick] Stansbury does a great job of getting the ball to him."

"We've got to try to focus on him and also know that they've got some surrounding pieces that are problems as well," Musselman said. "He's a great player and obviously had a great game against last year's team that was a little bigger than this Arkansas team."

Musselman, a former NBA head coach with Golden State and Sacramento, was asked his assessment of Bassey as a pro prospect.

"I can't really give too much of a projection because I haven't seen Bassey live, but in my opinion he's a great player," Musselman said. "He's got huge upside, he's still a young player, he's going to continue to grow and get better. College level, it's a big-time challenge."

Georgia Tech 6-11 senior center James Banks had 20 points and 14 rebounds in the Razorbacks' 62-61 overtime victory over the Yellow Jackets in Atlanta earlier this season.

While Banks put up some impressive numbers, he also had six turnovers against Arkansas and was called for four fouls, which limited his effectiveness on defense. He had one blocked shot after coming into the game averaging 5.7 to lead the nation.

"Surprisingly, I've been really happy with how we've defended the post," Musselman said. "I think a lot of teams will look at our roster and they try to throw it in there and we've ended up getting deflections and steals and we go the other way."

Arkansas' two primary post players, 6-6 senior starter Adrio Bailey and 6-8 sophomore Reggie Chaney off the bench, have combined for 59 of the team's 183 deflections.

Bailey has a team-high 40 defections while Chaney -- who missed the first three games because of a suspension -- has 19. Bailey also has 16 steals to tie Mason Jones and Isaiah Joe for the team lead. Chaney has eight steals.

"Certain players are better at fronting than other players. Some guys we play behind and then we kind of dig down and sit in the lap of the guy. For our whole team, we have to get deflections. We have to get our hands on balls for us to have a chance."

Ethan Henderson, a 6-8 sophomore, has played 27 minutes in three games, but he could figure into Arkansas' post defense considering his contributions off the bench in the first half of the Razorbacks' 69-61 victory over Austin Peay on Tuesday night.

With Bailey and Chaney on the bench with two fouls each, Henderson played the final 7:26 of the half and had 4 rebounds, 3 blocked shots and a dunk.

"We've got to kind of figure out how the flow of the game's going," Musselman said of Henderson's role. "Certainly Ethan played phenomenal last game.

"He's got probably more confidence. We have more confidence as a staff with what he did. Having said that, it's two teams that have a pretty short rotation, both Western Kentucky and us.

That may depend on whether Bailey and Chaney get into foul trouble trying to guard Bassey.

"Obviously, the experience Adrio has as a four-year college player, he understands our schemes," Musselman said. "I think Reggie too, even though he missed those first three games. I think he's playing catch up on exactly how we want to play post defense. Both those guys are really good."