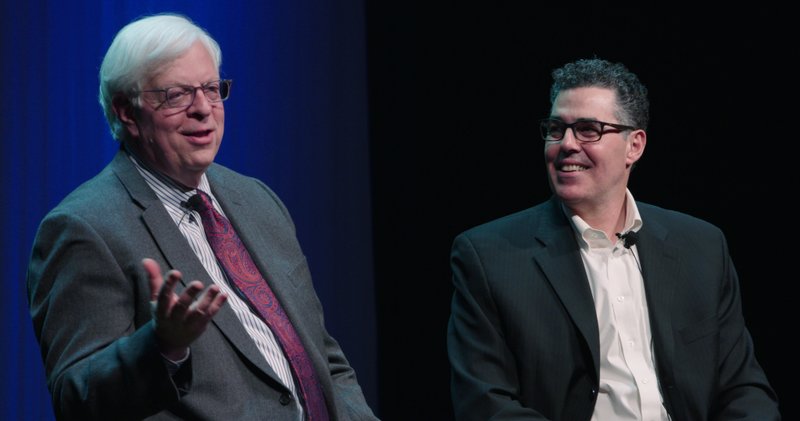 Dennis Prager and Adam Carolla make some good but obvious points in some disingenuous ways in No Safe Spaces, another reductive political documentary that wastes its opportunity by sliding into sensationalistic agitprop.

OK, let's get something straight.

The First Amendment is to protect speech you don't like. It's designed to keep the government from squelching unpopular opinions or suppressing dissent. It doesn't mean that there are to be no consequences when people say unpopular things, only that the police aren't going to lock you up or shut down your newspaper because of opinions you express.

If you say something stupid, there's nothing that guarantees someone won't call you out over it. They might say things that hurt your feelings. They might want to argue with you. They might boycott your business and tell their friends to shun you. They might ignore you. All that is fair, if not ideal.

We ought to expect to have our opinions pushed back against. We ought to enjoy debating issues with our fellow citizens. Too many of us have a tendency to seek only comforting channels where we are constantly reassured and told how right-thinking we are to have tuned into this particular brand of agitprop and not the other wrong-thinking brand of agitprop.

Too many of us cannot imagine a world where our most cherished beliefs and certainties might be interrogated and scrutinized. Too many of us never change our minds about anything. Too many of us receive every flattering notion that flits into our pretty little heads as an act of faith.

So I was prepared to receive a programmatic documentary called No Safe Spaces on its merits. We are at times too sensitive and precious in this country; we are lazy and know little but prefer to think of ourselves as brave and wise. We live in a world where people like Milo Yiannopoulos, Ann Coulter and Ben Shapiro can make a living off their opinions. While you might think it's dangerous to let them speak, it's more dangerous to try to shut them up.

Yet No Safe Spaces, despite a cultivated air of smug civility, misses its opportunity to say something interesting about our ongoing culture wars in favor of pearl-clutching whining about how hard it is to be a conservative in America today. It ignores the wider issue to focus on the problems some right-wing commentators have had when they've been booked on some college campuses.

Self-styled pragmatic libertarian Adam Carolla teams up with cigar-smoking social conservative talk show host Dennis Prager (he of the curious Prager University, which is not an accredited university and offers no degrees but pumps out an awful lot of right-wing propaganda you can consume for free because of the donations of fracking interests) to joust at straw men and advertise their own virtue.

Still, while the documentary is more cherry-picked and reductive than anything yet produced by Michael Moore, it's not wrong. It's just obnoxiously presented, ridiculously one-sided and sometimes kind of dumb.

When Prager is invited to conduct the Santa Monica Symphony Orchestra at Walt Disney Concert Hall in Los Angeles for a fundraiser, some people expressed objections and called for a boycott of the performance. A number of musicians threatened not to play and called for people not to attend. Prager responded by writing a column in National Review in which he called for people to attend the concert, which he characterized as "a chance to defeat the illiberal left."

The upshot was that Prager was not disinvited; he conducted a sold-out concert. His "rights" were not infringed. Maybe the controversy ultimately pulled in more money for the symphony. Maybe people who wouldn't ordinarily have attended the fundraiser went because they wanted to support Prager. I don't know.

I just don't see how he was victimized. A musician who refuses to play under the hand of a personality whose political views he finds repellent is exercising his free speech, not suppressing Prager's. Calling for a boycott is not a First Amendment violation.

To the larger point:

Argument should not be dangerous or upsetting. Carolla and Prager are right when they suggest many of us are too sensitive. But it's not only people who care about social justice and the welfare of our poorest and weakest citizens who can get their panties in a wad. A documentary that purports to be about freedom of speech and doesn't touch on the current administration's ongoing war on facts, science and the press is, at the very least, disingenuous.

No Safe Spaces isn't designed to engender debate or honestly engage the very real problem it purports to investigate. It's self-serving and obvious. Its rip-off of Schoolhouse Rocks isn't that clever, and you'll hear nothing that Bill Maher hasn't said before.

But it's a free country. And it's your money. I suspect that is what Carolla, Prager and the makers of No Safe Spaces really care about anyway.