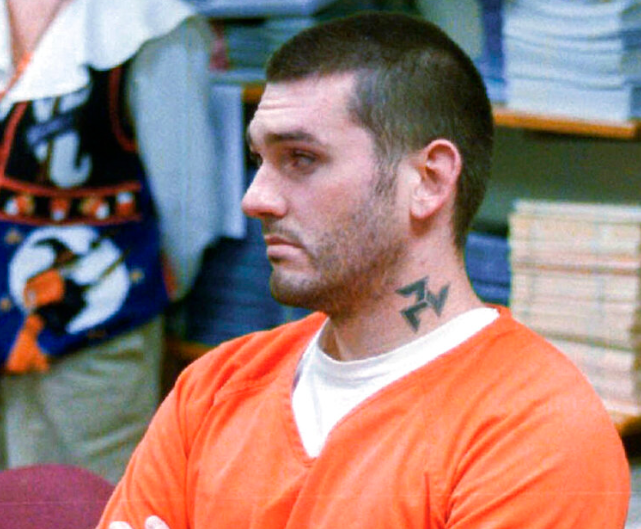 In this Oct. 31 1997, file photo Danny Lee waits for his arraignment hearing for the 1996 murders of an Arkansas family in Russellville, Ark. (Dan Pierce/The Courier via AP, File)

A federal court in Indiana granted a stay of execution Thursday to Daniel Lewis Lee, a white supremacist who was convicted 20 years ago of killing an Arkansas gun dealer and his family.

The ruling came hours after Arkansas Attorney General Leslie Rutledge announced that she had joined 13 other state attorneys general in supporting the U.S. Department of Justice in its pursuit of moving forward with its federal executions.

Lee was first on the list, and his execution date had originally been scheduled for Monday.

"The judge found a significant possibility that the Government was aware of, and failed to disclose, evidence undermining a key basis for [Lee's] death sentence," wrote Lee's attorney, Morris Moon, in a media statement.

During his 1999 sentencing, the federal government presented evidence depicting Lee as an active participant in a grisly Oklahoma killing that had taken place nine years earlier when Lee was 17 years old. While he didn't wield the knife in the slaying, Lee fetched the knife for his accomplice, according to court testimony.

In his appeal, Lee argued that the prosecution "created a false impression" to jurors regarding his conviction in that case. Lee was not convicted of the 1990 slaying because of a "lack of probable cause," court documents show.

But during the sentencing hearing in the Arkansas slayings, the government portrayed him as a killer in the Oklahoma case, not as an accessory. During the opening and closing statements, prosecutors told jurors that Lee had "an earlier murder under his belt."

In his ruling, U.S. District Judge James Patrick Hanlon of the Southern District of Indiana wrote that the defendant "has demonstrated substantial grounds upon which to challenge the legality of his execution."

In January 1996, Lee and his accomplice, Chevie Kehoe, entered William Mueller's home in the Pope County community of Tilly and killed Mueller; his wife, Nancy; and her 8-year-old daughter, Sarah. The victims were asphyxiated and dumped into the Illinois Bayou near Russellville.

Both men were tried and convicted three years after the crime. They were sentenced separately. Kehoe was sentenced to life in prison, and Lee received a death sentence after jurors heard the testimony related to the Oklahoma slaying.

Hanlon wrote that Lee has demonstrated a "significant possibility" that he may be able to overturn his sentence by showing that the government "suppressed evidence and misled the jury" during the penalty phase of the case.

Thursday's ruling was the latest in a long line of developments related to Lee's death sentence.

U.S. Attorney General William Barr announced in July that the federal government would restore capital punishment. That put five death row inmates on schedule to be executed this month and next. Lee was scheduled to be the first federal inmate executed since 2003.

On Nov. 20, a federal judge in Washington, D.C., halted Lee's execution and three others. The fifth execution had already been halted by a different judge.

On Thursday morning, Rutledge said in a news release that she was supporting the U.S. Department of Justice's attempts to execute Lee.

"Even in the most egregious cases, capital punishment helps bring closure to victims' families," Rutledge said in her prepared statement. "The federal court should not stand in the way of their relief."

Hours later came Hanlon's ruling for a stay of execution.

In spite of the government's pursuit of an execution, Nancy Mueller's mother and siblings have publicly said they do not want to see Lee executed. Part of the reason, Mueller's brother told the Arkansas Democrat-Gazette last month, is that they are convinced that Kehoe was the most culpable of the two.