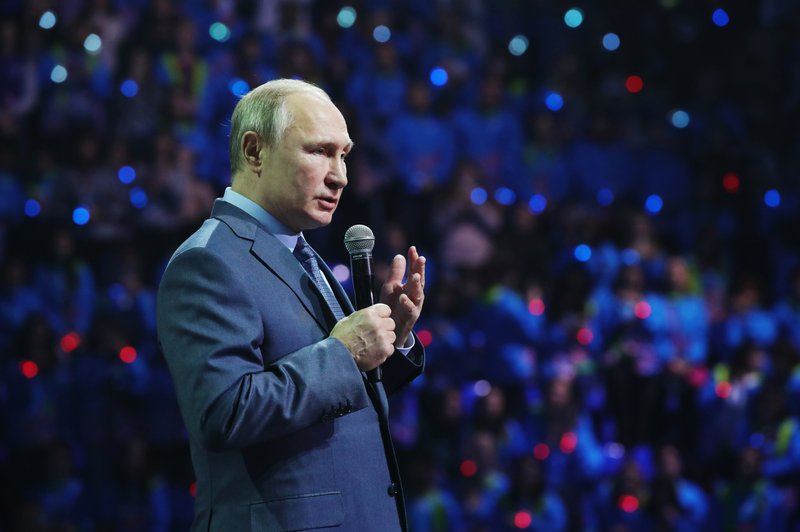 Speaking at a meeting with military officials, Putin said that Russia has repeatedly offered the U.S. to extend the New START treaty that expires in 2021 but that it hasn't heard back.

"Russia is ready to extend the New START treaty immediately, before the year's end and without any preconditions," he said.

The pact, which was signed in 2010 by former President Barack Obama and former Russian President Dmitry Medvedev, limits each country to no more than 1,550 deployed nuclear warheads and 700 deployed missiles and bombers. The treaty, which can be extended by another five years, envisions a comprehensive verification mechanism to check compliance, including on-site inspections of each side's nuclear bases.

Its expiration would remove any limits on Russian and U.S. nuclear arsenals for the first time in decades.

Arms-control advocates have argued that the failure to extend the pact would be highly destabilizing at a time when Russia-U.S. relations have sunk to the lowest levels since the Cold War.

Putin and other Russian officials have voiced concern about Washington's reluctance to discuss the treaty's extension.

"Our proposals have been on the table, but we have got no response from our partners," Putin said.

In Washington, a senior Pentagon official suggested that the Trump administration is not interested in an immediate extension and sees no rush as the pact doesn't expire until 2021.

John Rood, the undersecretary of defense for policy, told a Senate committee that the administration's main priority is getting Russia and China to agree to begin negotiations on a broader arms treaty to supplant the nuclear pact.

"If the United States were to agree to extend the treaty now, I think it would make it less likely that we would have the ability to persuade Russia and China to enter negotiations on a broader agreement," Rood said.

In an apparent bid to encourage the U.S. to extend the treaty, the Russian military last month showed its latest hypersonic weapon to U.S. inspectors. The Defense Ministry underlined that it demonstrated the Avangard hypersonic glide vehicle as part of transparency measures under the arms-reduction treaty.

Putin unveiled the Avangard in 2018 along with other prospective weapons, noting that its ability to make sharp maneuvers on its way to a target will render missile defense useless.

The treaty is the only remaining U.S.-Russian nuclear-arms control pact after both Moscow and Washington withdrew from the 1987 Intermediate-range Nuclear Forces Treaty.

The U.S. said it pulled out because of Russian violations, a claim the Kremlin has denied.

Putin reaffirmed Russia's pledge not to deploy missiles banned by the 1987 treaty until the U.S. and its allies do so.