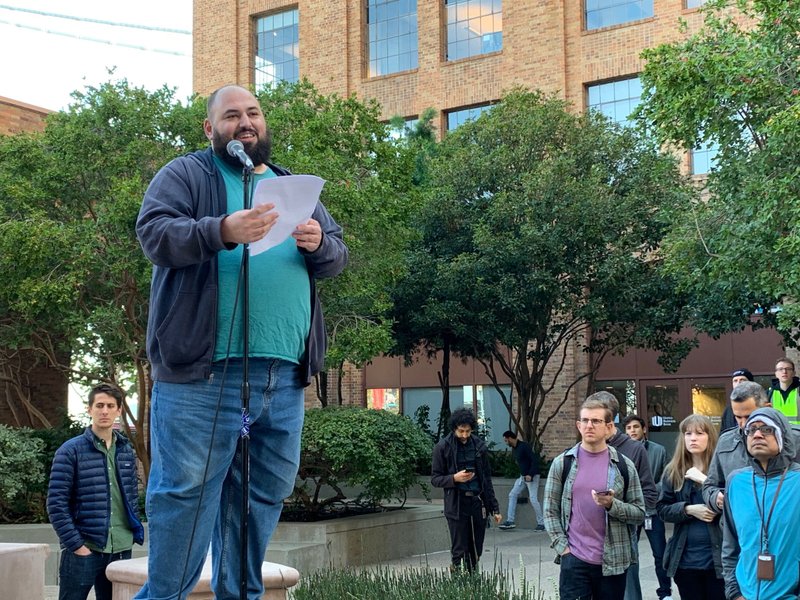 Laurence Berland, a Google employee then on administrative leave, speaks to protesters at a rally outside Google's offices in San Francisco on Nov. 22. MUST CREDIT: Washington Post photo by Greg Bensinger.

A group of four fired Google engineers filed a complaint with the National Labor Relations Board on Thursday alleging the company retaliated against them for their activism around possibly forming a union.

The complaint was filed on the workers' behalf by the Communications Workers of America union, suggesting the workers may have been previously working with the 750,000-member organization. Google, like many technology firms, has broadly resisted union drives.

(The CWA represents some employees of The Washington Post.)

"Google employees across the nation have been organizing for their mutual benefit and protection to preserve and improve their working conditions," according to the complaint. "Laurence Berland, Sophie Waldman, Paul Duke and Rebecca Rivers visibly led and participated in these efforts."

The complaint alleges Google's termination of the workers was "unlawful" and designed to "discourage and chill employees" from organizing activities that are protected by the National Labor Relations Act.

Google disputes the circumstances of the workers' firings, saying they were let go because of violations of company policy, including reviewing internal files that were outside the scope of their job and for accessing employees' calendars.

"I believe I was fired for my organizing efforts at Google," said Duke, a New York-based software engineer, in an interview before the filing was made.

A spokeswoman for Google, Jenn Kaiser, said the employees were fired for "repeated violations of our longstanding data security policies" and that "no one has been dismissed for raising concerns or debating the company's activities."

National Labor Relations Board spokesman Edwin Egee said he had no immediate comment.

The workers said Google has been trying to upend its 2-decade-old culture, marked by an at-times freewheeling workplace where, among other things, employees could challenge executives at weekly all-hands meetings. Google recently suspended the confabs in favor of monthly ones that are limited to discussions about product releases.

Waldman, another engineer, said in the prior interview that Google was trying to become a "more conventional company" in which dissent was not tolerated.

"They are trying to send a message" to other employees not to speak out on labor issues, she said.

The filing comes just two days after Google's co-founders, Sergey Brin and Larry Page, stepped back from their daily work at the Silicon Valley giant's parent company, Alphabet, handing the CEO reins to Google chief Sundar Pichai. In addition to navigating a roiling workplace, Pichai will have to tackle ongoing antitrust investigations at the Justice Department and nearly every state attorney general's office.

The fired workers have become something of a symbol for some employees, who in internal forums have bemoaned what they view as overreach by management. Berland and Rivers were at the center of a November rally where about 200 workers protested their suspensions and demanded Google reinstate them.

Google said the workers were fired after "our thorough investigation found the individuals were involved in systematic searches for other employees' materials and work," according to a November memo obtained by The Post. "This includes searching for, accessing, and distributing business information outside the scope of their jobs."

In September, Google reached a separate settlement with the National Labor Relations Board, agreeing to post notices to remind employees of their workplace rights, including the ability to talk to each other about conditions and push for other changes.

Google has been seeking to more tightly control what information employees discuss after recent leaks, including those of sensitive projects, such as work with the Defense Department and attempts to craft products for mainland China, where Google is largely banned.

A particular flash point came in October when Google rolled out new internal software that some employees believed was meant to monitor them, particularly in their efforts to discuss union organizing. Google said in an all-hands meeting at the time that the software was for moderating internal forums.

Google has had previous experience with unionizing workers. A small group of contract workers at a Google office in Pittsburgh voted to form a union in September, a rare instance for tech employees. Organizers for the roughly 80 workers said collective bargaining would help them secure benefits and pay on par with non-contract Google workers.