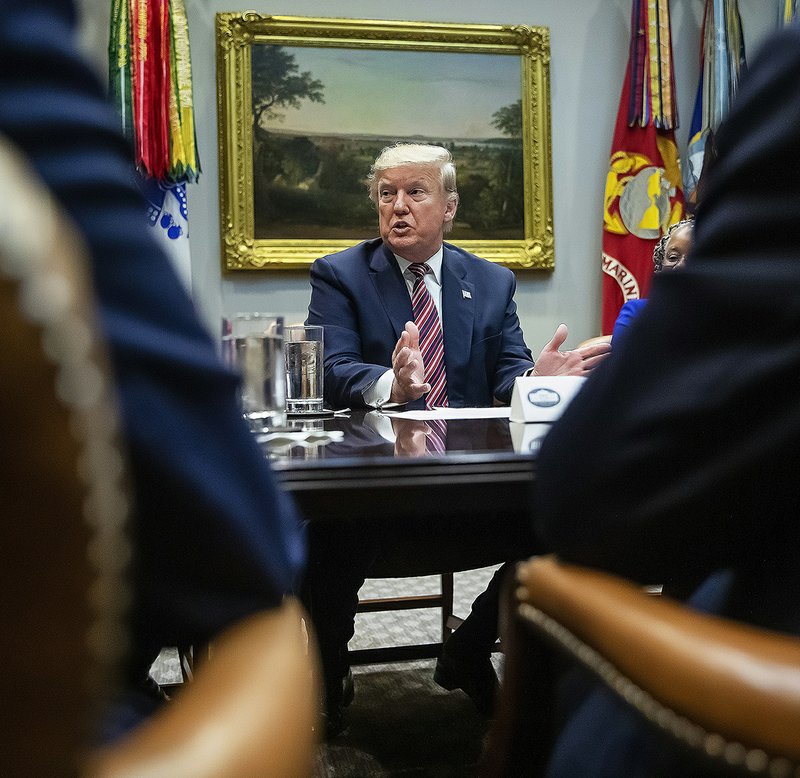 President Donald Trump speaks at a small-business gathering Friday at the White House. In tweets, Trump touted the strong job numbers and said the economy would be even better if not for what he called the Democrats’ “horror show.” More photos at arkansasonline.com/127jobs/

WASHINGTON -- Hiring in the United States jumped last month to its highest level since January as employers shrugged off trade conflicts and a global slowdown and added 266,000 jobs.

The unemployment rate dipped to 3.5% from 3.6% in October, matching a half-century low, the Labor Department reported Friday. And wages rose a solid 3.1% in November compared with a year earlier.

Investors cheered the report, sending the Dow Jones Industrial Average up more than 330 points, or 1.2%, on Friday.

"I think that this report is a real blockbuster," said Daniel Zhao, senior economist at the career site Glassdoor. "Payrolls smashed expectations."

November's healthy job gain runs against a widespread view that many employers are either delaying hiring until a breakthrough in the U.S.-China trade war is reached or are struggling to find workers with unemployment so low. The pace of hiring points to the resilience of the job market and economy more than a decade into the U.S. economic expansion -- the longest on record.

Steady job growth has helped reassure consumers that the economy is expanding and that their jobs and incomes remain secure. Consumer spending has become an even more important driver of growth as the Trump administration's trade conflicts have reduced exports and led many businesses to cut spending.

"Today's jobs report, more than any other report in recent months, squashed any lingering concerns about an imminent recession in the U.S. economy," said Gad Levanon, an economist at the Conference Board, a business research group.

"Consumers are entering the holiday season with both the ability and the willingness to spend."

President Donald Trump seized on the strong jobs report as he tries to focus voters' attention on the state of the economy rather than the impeachment inquiry being led by House Democrats. The latest numbers also come as Trump's trade war with China had prompted companies to cut back on their investments in plants and industrial equipment, slowing growth.

"Without the horror show that is the Radical Left, Do Nothing Democrats, the Stock Markets and Economy would be even better, if that is possible, and the Border would be closed to the evil of Drugs, Gangs and all other problems! #2020," the president tweeted.

The healthy data suggested that the Federal Reserve, which meets next week, is unlikely to cut its benchmark short-term interest rate anytime soon. The Fed has cut rates three times this year to help nurture the economy.

At the same time, Chairman Jerome Powell has said the Fed is not inclined to raise rates in response to ultra-low unemployment until inflation has risen consistently, which has yet to happen. The perception that any rate increases are a long way off has helped underpin the stock market's gains.

"We would need to see a really significant move up in inflation that's persistent before we would consider raising rates to address inflation concerns," Powell said on Oct. 30. That was after the U.S. central bank cut rates for the third-straight meeting and clearly signaled policy was on hold unless there was a big shift in the outlook.

In a newsletter this week, David Kelly, chief global strategist at JPMorgan Funds, compared recent hiring to squeezing one more glob of toothpaste out of a seemingly empty tube.

"Over the last few years," he said, "an apparently fully tapped-out labor market has yielded a surprising number of new workers."

The buffet of available job postings has drawn many Americans back to work. Employers have widened their scope, recruiting people with disabilities or criminal records. Older baby boomers are working past retirement age and stay-at-home parents are switching to paid employment.

The labor force participation rate inched up through most of the spring and fall, driven in part by an increase in women 25 to 34 getting jobs or starting to look for work. Over the past year, nearly 1.7 million people joined the ranks of workers.

Kelly does not expect the historically low unemployment rates to fall much more.

"Gains in employment going forward will have to come from an increase in the labor force," he wrote.

Economists are engaged in a vigorous debate about how tight the labor market is and how many more people are available to work.

Employment agencies say they are often unable to find candidates to fill the jobs that are open.

Fears that the U.S. economy might slip into recession peaked during the fall as the U.S.-China trade war intensified and financial market trends pointed to a downturn in the coming year or two. That raised the possibility that Trump would have to face a Democratic opponent next year against the backdrop of a struggling economy.

But Friday's figures paint a somewhat rosier picture of the economy. And some risks to global growth, such as a disorderly Brexit for the U.K., have faded in the past month. Most economists are predicting modest growth for next year.

Renewed concerns that trade will continue to hamper the U.S. economy drove stock prices lower earlier this week, after Trump had said he was willing to wait until after the 2020 elections to strike a preliminary trade agreement with China. With the two sides still haggling, the administration is set to impose 15% tariffs on an additional $160 billion of Chinese imports beginning Dec. 15.

Both sides have since suggested that the negotiations are making progress, but there is still no sign of a resolution.

The return of striking General Motors autoworkers added roughly 40,000 jobs in November, a one-time bounce-back that followed a similar decline in October, when the GM strikers weren't counted as employed.

Friday's data included other positive news: The government revised up its estimate of job growth for September and October by a combined 41,000.

Temporary hires for the Christmas shopping season did not appear to be a major driver of last month's job growth. Retailers added just 2,000 jobs on a seasonally adjusted basis. And transportation and warehousing companies gained fewer than 16,000. Both figures are below last year's November totals. The shopping season is shorter this year because Thanksgiving occurred later than in recent years, which might be delaying some temporary hiring.

Most analysts say they remain hopeful about the economy and the job market. The economy grew at a 2.1% annual rate in the July-September quarter, and the annual pace is thought to be slowing to roughly 1.5% to 2% in the final three months of the year -- sluggish but not recessionary.

Consumer confidence has slipped in recent months but remains at a decent level, helping boost sales of expensive purchases, such as autos and appliances.

The Fed's three interest-rate cuts have helped to lower mortgage rates and support the housing market. Sales of existing homes have risen nearly 5% in the past year. Sales of new homes have soared by one-third.

Information for this article was contributed by Christopher Rugaber of The Associated Press; by Patricia Cohen of The New York Times; and by Alister Bull of Bloomberg News.