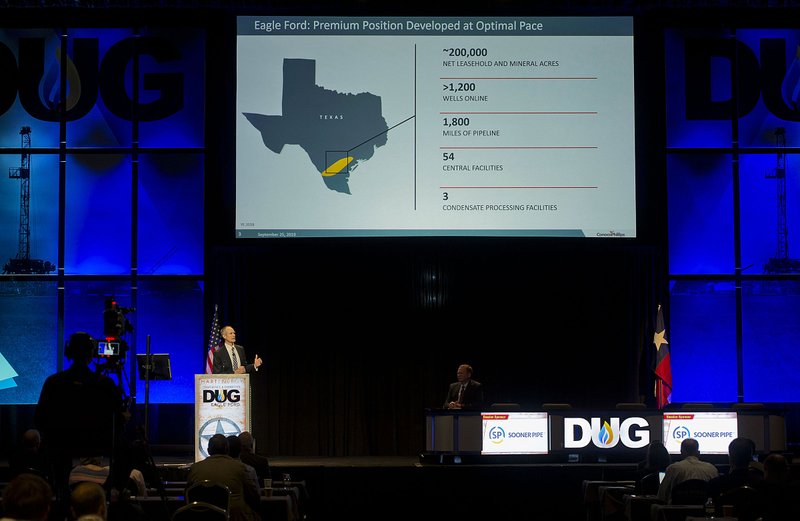 At EOG Resources Inc.'s Francisco lease in the heart of the Eagle Ford Shale in south Texas, half a dozen cows laze in the shade of a tree next to black oil-storage tanks. A small flare burns atop a steel pylon, like a memorial to the boom days gone by.

There are six wells on the parcel of land -- three drilled in 2013 and three from 2016 -- and together they churn out just 130 barrels of crude daily, worth about $7,150 at current prices, according to data from ShaleProfile Analytics. Output is down more than 95% from peak levels, the data shows.

Yet wells like these may be a harbinger of the U.S. shale industry's future if investors are successful in forcing independent explorers to prize profit over production. In the wake of the oil price crash that began in 2014, new drilling in the Eagle Ford dwindled as management teams cut budgets, and output in the region is now down about 20% from pre-crash levels.

That austerity finally began to pay off this year as the Eagle Ford as a whole generated free cash flow for the first time, according to IHS Markit.

It's a grand bargain that the Eagle Ford's bigger Texas cousin -- the Permian Basin -- is wrestling with: sacrificing growth for profit.

At current oil prices, "what you cannot do is harvest cash and grow," said Raoul LeBlanc, a Houston analyst at IHS. "There's an inflection point coming here because production growth is going to slow down massively."

The implications for U.S. oil production are vast. Shale wells are gushers for the first three months but after that, output plummets so that by the end of the first year it's down about 60%. That's 10 times the decline rate of conventional wells.

As a result, America's record crude output relies heavily on new wells. About two-thirds of U.S. shale oil comes from wells drilled within the past 18 months, according to ShaleProfile's data.

As the Eagle Ford shows, once new drilling slows, production quickly follows. Explorers in the south Texas field reduced drilling sharply in 2016, when oil cratered to less than $30 a barrel, and overall production has never fully recovered. The Eagle Ford now produces 1.37 million barrels a day, about 20% below its peak four years ago.

Of the basin's 17,511 shale oil wells that went online before 2018, 60% are pumping fewer than 25 barrels a day. Most new drilling just fills the gaps left by rapidly declining older wells.

On an autumn drive through the lush pasture lands of Gonzalez County east of San Antonio, tractors share gravel roads with oilfield trucks doing routine maintenance. Chicken farms and cattle ranches are interspersed with pumpjacks and oil-storage tanks. There are none of the traffic jams, new car dealerships and storefront bail bondsmen of the Permian Basin 400 miles to the west.

Although the Eagle Ford became cash-flow positive earlier this year, the spoils haven't been equally shared. The bulk of the positive earnings were from three companies: ConocoPhillips, Devon Energy Corp. and EOG. Some, such as Sanchez Energy Corp., filed for bankruptcy in August while Pioneer Natural Resources Co. and Equinor ASA sold assets.

Next year looks like a potential turning point for the industry as shale specialists focus on harvesting cash and restraining the itch to expand drilling at all costs. The resulting slowdown in output growth, in turn, may mean an end of the U.S. domination of global crude-supply growth.

To be sure, the top American drillers -- Exxon Mobil Corp. and Chevron Corp. -- aren't under the same investor pressure to curtail spending and have mapped out ambitious growth targets from shale holdings in the Permian and elsewhere. At the same time, some smaller operators have no choice but to continue drilling to generate cash for debt payments.

EOG also expects to increase Eagle Ford production this year. "EOG's level of production growth is an output driven by reinvesting for returns while also generating free cash flow," the Houston company said in a statement.