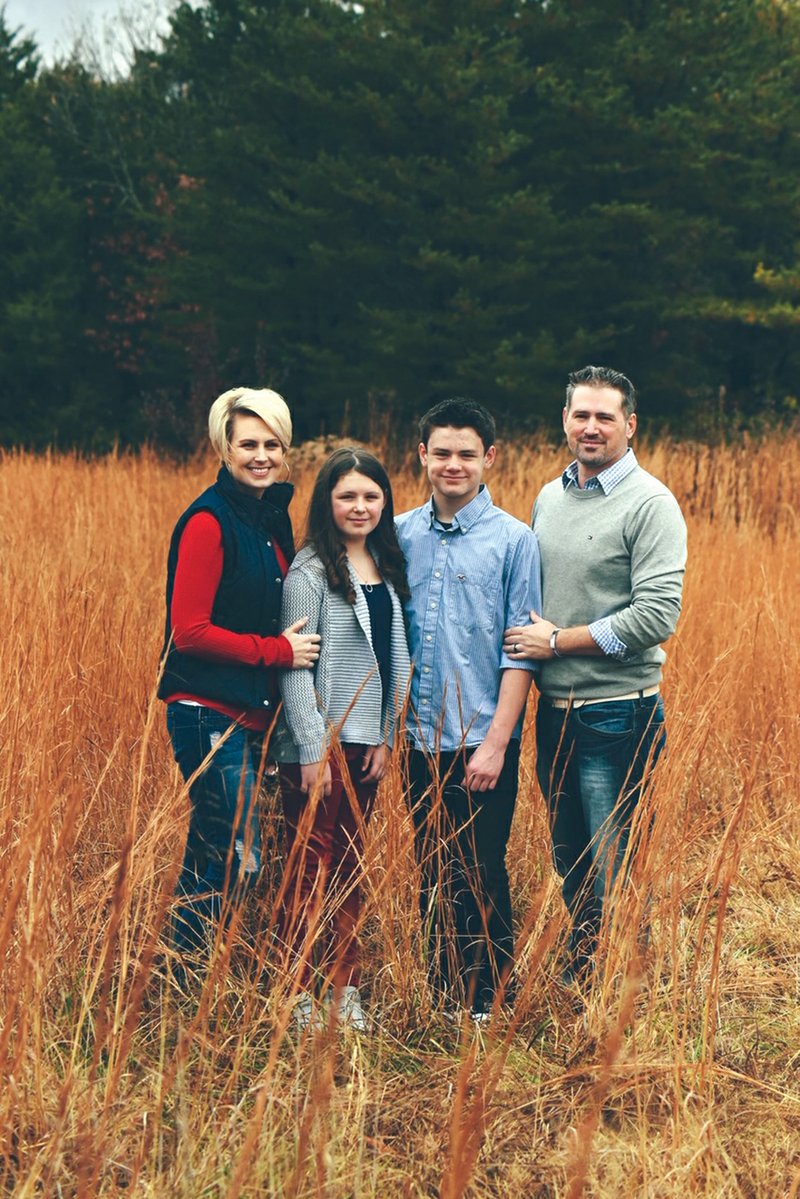 Tiffany and Patrick Turney of Sulphur Rock had family photos made just before Tiffany’s hair fell out from chemotherapy. Here, they are shown with their children, Bella, 10, and Aiden, 12.

SULPHUR ROCK — More than once when she was growing up, Tiffany Turney was falsely diagnosed with cancer. But two years ago when a severe pain sent her to the doctor, the tests led to a diagnosis that would not be retracted.

Turney, 36, of Sulphur Rock, has a rare form of cancer called neuroendocrine carcinoma, and the community is rallying around the family to help with expenses. A dinner and silent-auction fundraiser will take place from noon to 6 p.m. Saturday at the Sulphur Rock School Gym, 480 N. Main Street.

Before her cancer was diagnosed, Turney said, she had no symptoms and didn’t even have a primary-care physician. But when her employer, a therapy company, required a physical exam, Turney, a physical-therapy assistant and director of rehab at the time, had to find a doctor.

She said she got a tetanus shot for good measure because her family’s house had burned in October 2016, and they were rebuilding. The following year, she got a card stating it was time for her yearly checkup, so she went back, and her doctor recommended a Pap smear. Turney hadn’t had one since her daughter, Bella, was born.

Turney said she didn’t receive her results over the next couple of months but chalked it up to miscommunication. At the end of January, she and her husband, Patrick, went with a group of friends to see comedian Kevin Hart in Memphis. The night before, the couple went to Beale Street and had a great time, she said.

The next day, she was suddenly hit by a severe pain in her right side that was so intense, she missed the show and went to the hospital instead. She said the emergency-room staff said she must be passing a kidney stone, but her scans and urinalysis were all clear. They sent her home with pain medicine, but Turney had no answers.

“That pain was not normal for me,” she said. “I missed the Kevin Hart show. I was so upset. I really wanted to see him.”

But the next day, Tiffany still felt so bad that she called in sick to work, which was unusual for her. That day, her doctor’s office called with the results of her Pap smear: It was abnormal, and she needed a biopsy.

She got the biopsy in February, and the doctor said there was something “suspicious,” but he would send it off for further testing and hoped to see the results in about two weeks.

In the meantime, Tiffany went back to work and resumed her normal life.

Four days before she was scheduled to go back for her results, the doctor’s office called and asked her to come in that afternoon.

Tiffany said she thought, “OK, I’ll go in and get it over with,” not imagining it was anything serious, but what the doctor told her was that she had neuroendocrine carcinoma of the cervix.

Tiffany had never heard of it. She said her doctor told her it was extremely rare and that she would need to go to a specialist.

“Neuroendocrine tumors account for only 1-2 percent of all cervical cancers. Therefore, approximately 150-200 women are diagnosed annually with NEC of the cervix in the United States,” according to the Neuroendocrine Cervical Tumor Registry website necervix.com, established by the MD Anderson Cancer Center.

“I have no memories of my own” of him, she said.

Her paternal grandmother also died of cancer the year before her father.

Tiffany and her brother were both tested several times for cancer, and more than once, Tiffany’s tests came up positive. Doctors later called back to say that she didn’t have cancer after all, but the stress took a toll on her.

But there was no mistaking the diagnosis this time. Tiffany had cancer.

Treatment options would involve a hysterectomy, chemotherapy and radiation.

After the doctor’s appointment, Tiffany said, she sat in the car, trying to process what had been said and what she had to do next. She dreaded making the phone calls.

“That’s what bothered me the most, having to tell everybody else,” she said. “People are more emotional about it than I am. … I hate seeing my mom broken down. I hate seeing my brother having a hard time handling it.”

Patrick was first. He was upset that she’d gone to the doctor by herself, but Tiffany said she thought the visit would be routine, no big deal. The two talked about what would come, then they had to break the news to Aiden and Bella, 12 and 10 at the time, respectively.

Aiden, the warrior, was fierce in attitude and ready to kick cancer’s butt. Bella is the emotional one, Tiffany said.

“She’s very in tune with her emotions, but she doesn’t know how to handle them yet,” Tiffany said.

In February 2018, Tiffany and Patrick went to a specialist at the University of Arkansas for Medical Sciences who did more tests and told them this type of cancer is fast growing and spreads quickly, so they would treat it aggressively.

Within two weeks, Tiffany was in an operating room, where surgeons did a hysterectomy but left her ovaries, which they said looked fine, and removed the lymph nodes in her abdomen because of the possibility that they could spread the cancer.

She followed with four cycles of chemo, working as much as she could in that time, she said.

“The hair loss was the most devastating thing to me at the time,” she said. “The first treatment wasn’t bad; the second one had a few side effects. The third one, I wasn’t feeling good at all, and the fourth one really had me down, pretty bad.”

She said she’d come home and spend the rest of the evening on the couch.

“I was hurting and felt so sick,” Tiffany said. “Patrick and the kids did everything. I felt so worthless. It was tough.”

After the chemo, she had a scan, and all looked fine. That was July, and by the end of November, she was having severe pain in her left side. She had some pain medicine that helped a little, and she made it through the new year with no other changes, she said.

Then in January 2019, Tiffany was coming back from a business meeting in Mississippi. She was driving Patrick’s Corvette and hit a slick patch of road around Marked Tree.

“I spun out his car and totaled it,” she said. “I still feel bad about that.”

She refused to go to the ER, but the next day, she had some neck and shoulder pain. When her boss called to check up on her and was adamant that she be checked out, Tiffany relented.

She got to the hospital and requested that when they did the scans on her neck and back, they also scan her abdomen. When the hospital staff learned more about her history, they agreed to add an abdominal pelvic scan.

“They did the scan and came back,” Tiffany said, “and she said, ‘I’m glad you asked for that scan.’ I asked, ‘What did you find?’ She said, ‘We found a 10-centimeter lesion in your pelvic floor.’”

That was the size of a large grapefruit or medium-size coconut, Patrick said.

Tiffany went back to UAMS and had another surgery within a few weeks. By then, the mass had ruptured. The cancer had metastasized.

Doctors told her there wasn’t much they could do, but they wanted to try immunotherapy as an alternative to chemo, Tiffany said.

She couldn’t keep anything down and dropped from 172 pounds last year to 133.

A later scan found the cancer had continued to spread, she said. She had lesions on her abdomen, on her hip bone and on both lungs. She also had another mass in her pelvic floor.

She was referred to another specialist at MD Anderson in Houston, in hopes of getting her into a clinical trial or having other treatments. Tiffany saw him in November.

“He has patients from all over the world,” she said. “It was pretty amazing, and it went really good. He was just honest about everything. He said, ‘We hope this works, but we’re not really sure.’”

Patrick said that while she was getting chemo at MD Anderson, a scan showed her cancer had spread into her thyroid and liver, as well as a few other areas.

Now Tiffany is taking chemo in Batesville, and after every cycle, she goes back to UAMS for scans, she said.

She asked the doctor at MD Anderson, “What are the chances this will work?” and he said there was about a 25 percent chance the treatment would work. If it doesn’t work, there are some other types of chemo she can take for maintenance, or they can talk about palliative care, she said.

Tiffany and Patrick said they favor quality over quantity, and they’ve already had conversations about that.

“We’ve got what time we’ve got, and we’ll try to make it the best we can,” Patrick said. “If the roles were reversed, I would want the same thing. … The truth is, none of us is guaranteed tomorrow. We know now, regardless of what time she’s got … we’ve got to make the most of what time she has.”

Patrick said both Aiden and Bella are in the mindset that Mom has beaten this before and will again, and he feels the same way, but they do have questions and go to Patrick when their mom is not around.

“They know I don’t feel good, and I’m not as involved in everything as I was because physically, I can’t do it,” Tiffany said. “They’re having to help out more around here.”

Tiffany said she is fortunate that both her mom, Wanda Peterson, and Patrick’s parents, Lonnie and Kathi Turney, live close enough that they can keep the kids when she and Patrick have to go to UAMS.

“We don’t usually drag the kids to Little Rock because we never know how many days we’ll have to stay, and they have school,” Patrick said.

Bella has a hard time verbalizing her feelings, so she often gives her mom a letter or a handmade card. Patrick said he and Bella spend time in “octane therapy,” rebuilding his Corvette.

One day, Bella asked her mom if she was going to die, and Tiffany told her everyone dies, and they don’t know when, so in the meantime, they have to make the most of the time they have today.

Aiden rallies around his mom, saying she’ll beat the cancer, but he knows it’s not a joking matter and if other kids mention cancer, he will quickly “step up and correct them,” Tiffany said.

Tiffany said she is not afraid to die. What bothers her is her kids having to cope with that possibility, but she knows they have Patrick, not to mention a strong support system from family, friends and even the school.

So many people from her alma mater, Sulphur Rock School, have stepped up with donations for the upcoming fundraiser that Tiffany can hardly talk about it without crying, but she is very thankful for their help, she said.

The silent auction and dinner on Saturday will include items donated by local businesses, such as automotive accessories, cupcakes, photography packages, baskets, gift cards and more. Anyone wishing to make a donation may contact Jessica Marlin at (870) 751-0913. T-shirts will also be sold. All proceeds will go to help with Tiffany’s medical and travel expenses.