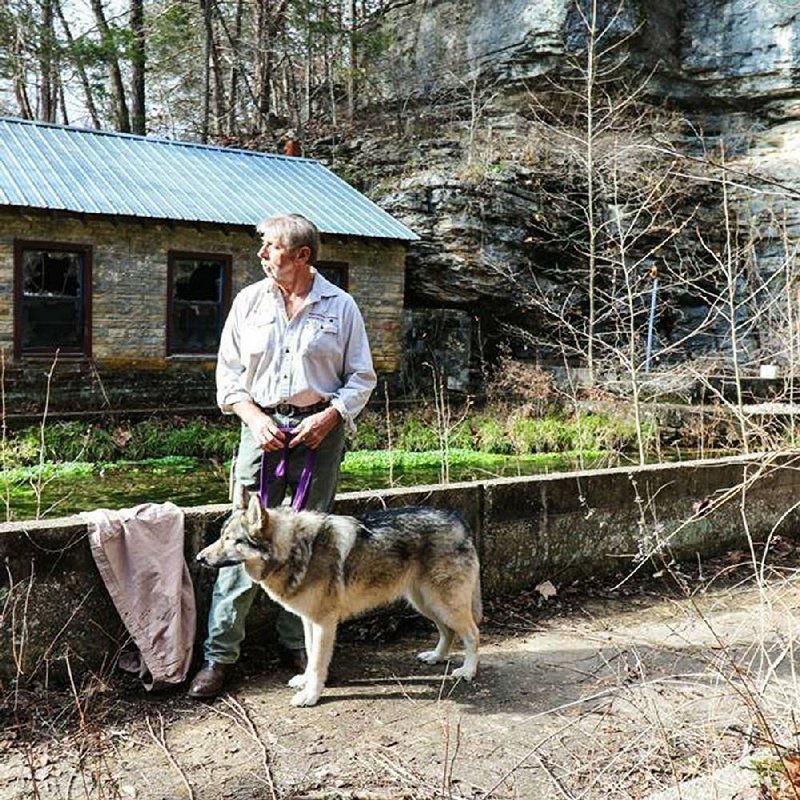 Bud Pelsor stands with Dia, his pet wolf, in an undated photograph. Pelsor and a partner are trying to sell the Dogpatch property north of Jasper for $1.25 million, but so far they’ve been unsuccessful. With foreclosure imminent, Pelsor says he’s leaving Arkansas.

He's moving to his home state of Indiana, where he plans to manage a "16-year-old guitar prodigy" from Oklahoma.

Pelsor, 69, the inventor of a spill-proof dog bowl, came to Arkansas in 2014 to convert the abandoned Dogpatch theme park into an "ecotourism village."

But things didn't work out.

Last month, Pelsor was served with a foreclosure notice.

A lawsuit was filed in Newton County Circuit Court against his company, Great American Spillproof Products, the official owner of the 400-acre Dogpatch property. It was behind on the lease payments and owed more than $922,000 on a $1 million promissory note supposed to be paid off in August.

"I've been a success at everything I've done in my life except Dogpatch," Pelsor said. "This is the only failure that I can put on my books."

For the past five years, Pelsor has been the driving force behind something -- anything -- happening at Dogpatch.

The theme park based on Al Capp's Li'l Abner comic strip had its hillbilly heyday in 1968. It finally closed for good in 1993.

But it profoundly affected many people who visited there as children and remember it fondly.

Pelsor, whose family hailed from the Arkansas town of the same name, wanted to rekindle some of that excitement. But backers fell away.

"I don't think there's anybody on the planet that would love it any more than me," Pelsor said of Dogpatch. "I'm just not able to pull it off. The stress of this place is killing me. I've had successes in a lot of ways, but everybody that was supposed to come on financially, well, there were just too many talkers."

Pelsor said he's living for the time being in a "travel trailer" on the Dogpatch property. He had been living in a "chalet" on adjacent property in Marble Falls, which had a brief history as a ski resort, but he moved out amidst foreclosure proceedings there, as well.

Great American Spillproof Products bought the Dogpatch property for $2 million in 2014. Besides the promissory note, the company paid $1 million.

Pelsor and his business partner, James Robertson of Newbury Park, Calif., have been trying to sell Dogpatch for years. The property is listed for sale for $1,250,000 -- down from $3 million when it was first posted for sale in 2016.

But so far, there have been no takers.

Pelsor said Robertson is still trying to sell the property.

When asked about that, Robertson responded, "I have no information on Dogpatch. Bud Pelsor is your contact for Dogpatch."

Pelsor said he'll end up taking all the loss on the sale of the property, whether it's to a new buyer or on the courthouse steps in Jasper.

Pelsor has had to contend with vandals, arsonists and a sub-lessee who left in the middle of the night after falling behind on his payments.

"It looks like a jungle," Pelsor said of the overgrown park in August 2018 after David Hare, president of Heritage USA Ozarks Resort, abruptly departed.

That same month, a Kansas family arrived to relive their vacations from the 1980s. But the hotel in Marble Falls was closed, and nobody was around.

They spent the night in a hotel in Harrison, 10 miles to the north. The next day, they found Pelsor. He let them into Dogpatch, where they frolicked among the ruins for six hours.

"I got a spanking in the gift shop when I was little, so my sister wanted me to reenact that but I didn't," said Misty Smith of Columbus, Kan. "We laughed so hard we cried several times. They turned what could have been a horrible weekend into one of the best weekends we've had."

Such is the hold Dogpatch has on people of a certain age.

Constructed in 1967 for $1.33 million (about $10 million in today's dollars), Dogpatch originally featured a trout farm, buggy and horseback rides, an apiary, Ozark arts and crafts, gift shops and entertainment by Dogpatch characters, according to the Central Arkansas Library System's Encyclopedia of Arkansas. Amusement rides were added later.

Great American Spillproof Products was supposed to pay $6,559 a month on the note for five years, with a balloon payment for the entire unpaid amount and accrued interest due Aug. 13, according to the lawsuit. But that balloon payment, along with several months of rent, wasn't paid.

Robertson and his wife, Susan, took out a second mortgage on the property in 2014 in the amount of $1.2 million, according to the lawsuit.

The lawsuit -- filed by Stewart Nance; his son, John Pruett Nance; and their attorney, Gregory Brent Baber -- also names as a defendant David "Shawn" Smith, who had a $2,840 lien on the property.

The Nances acquired the property in 2011 in lieu of a $764,582 court judgment against the previous owners, brothers C.L. and Ford Carr of Missouri, and Michael Carr, a caretaker of the property.

The Nances sued the Carrs after Pruett Nance was severely injured in 2005 while riding an all-terrain vehicle on a road through the abandoned park. Pruett Nance's trachea was severed and his neck was broken after he rode the ATV into a booby-trap-style cable strung between two trees.

Immediately after the judgment, Stewart Nance said the family had no plans to develop the property and would seek to sell it.

"Dogpatch brings out the dreamers," he said. "It brings a lot of traffic, dreamers and real ones. Dogpatch evokes passion."

Pelsor said his patent on the Buddy Bowl will expire at the end of the year. The bowl has a reservoir of sorts around the top rim so that if a dog tips it over, water stays in the reservoir.

Pelsor said he'll miss Dogpatch, but he'll have plenty to do in Indiana.

"It's always painful to leave," he said. 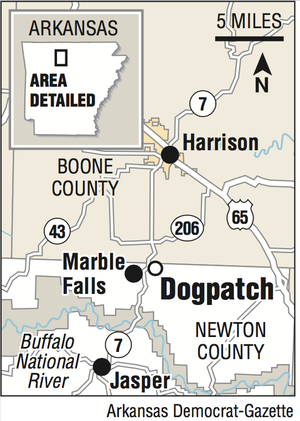