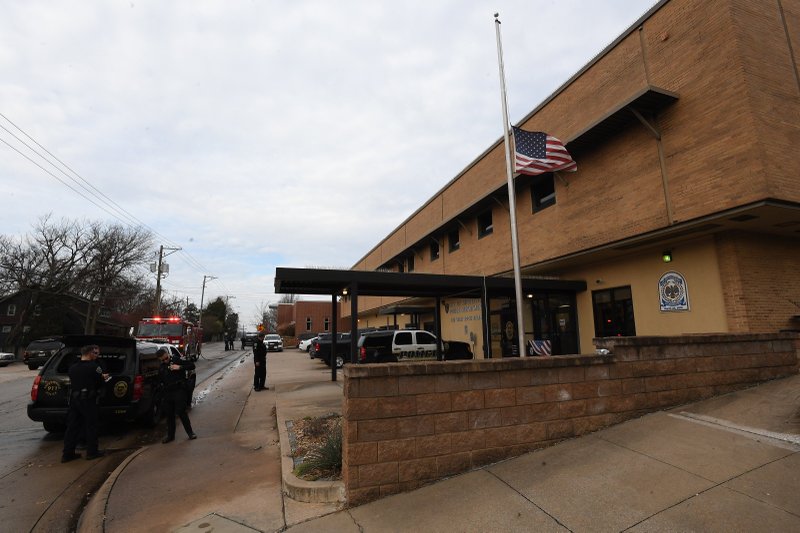 NWA Democrat-Gazette/J.T. WAMPLER Fayetteville police gather outside of the police station Sunday Dec. 8, 2019 while the flag flies at half-mast after the Saturday night shooting death of police officer Stephen Carr behind the station in downtown. The suspected shooter, London T. Phillips, 35, of Fayetteville was killed at the scene by other officers.

FAYETTEVILLE -- Stephen Carr was an exemplary police officer who was executed in a cowardly act, his chief said Sunday.

"Last night was certainly the worst day in the history of the Fayetteville Police Department," Police Chief Mike Reynolds said during a morning news conference. "We lost one of our own."

Carr, 27, was shot and killed about 9:40 p.m. Saturday while in his patrol vehicle in the parking lot behind the police station, Reynolds said. The suspect, London T. Phillips, 35, walked up to the vehicle and shot at Carr multiple times at point-blank range, striking him once in the head and killing him, Reynolds said.

Officers inside the police station heard the gunfire and briefly chased Phillips into a nearby alley way, Reynolds said. Two officers, whose names were not released Sunday morning, shot Phillips, although Reynolds said he was unsure how many times. It was unclear if Phillips fired at the officers. Both officers are on paid administrative leave pending an internal investigation, per department policy.

"I don't know how many shots were fired, at this time, at the officers," Reynolds said. "I know there were several shots fired at Officer Carr in his vehicle."

Paramedics treated both Carr and Phillips, but both died at the scene, Reynolds said.

Phillips was in possession of a 9 mm pistol and two boxes of ammunition, Reynolds said. Reynolds said he believed Phillips could have injured more officers or nearby people at the downtown square were it not for the actions of Carr's fellow officers.

People were at the square to view the Lights of the Ozarks. According to reports, several heard the gunshots and fled.

Carr began work as a police officer in the city in April 2017. He was assigned a patrol beat to the Dickson Street entertainment district area. He was getting ready to go on patrol before the shooting, Reynolds said.

"He served the citizens of Fayetteville and our community with dedication and professionalism for 2 ½ years," Reynolds said. "He's a hero."

"I've got 131 officers including myself," Reynolds said. "If I had 131 Stephen Carrs, I wouldn't be more ecstatic. He came from a law enforcement family. He knew what the job was about. He just wanted to serve his community."

Mayor Lioneld Jordan said he was at a loss for words. The city is filled with sorrow and confusion, he said.

"I'm known for my rallying cry of 'don't you just love this city.' I usually say it with rejoice," Jordan said. "But this morning, I want to ask everyone to embrace each other with compassion."

Some officers received minor cuts and bruises, and one officer broke a hand, Reynolds said. He did not describe how the injuries occurred.

The Washington County Sheriff's Office is taking lead in the investigation. Sheriff Tim Helder said the suspect's vehicle was towed from the scene to be processed for evidence.

The Federal Bureau of Investigation is assisting the Sheriff's Office in its investigation. State police also are involved.

Reynolds said the city's department is holding its own internal investigation to ensure the other officers' followed proper policy and procedure.

"All I know is this was a cowardly act," Reynolds said. "I have no information that leads me to believe that he targeted this officer specifically. He was looking for an officer to kill."

Sgt. Anthony Murphy, department spokesman, said more information will be forthcoming on the confrontation between officers and Phillips.

"We haven't had an opportunity to speak with the officers in depth yet," Murphy said. "We're giving them a chance, per policy, to rest and get their wits about them."

A memorial was set up outside the police station Sunday in Carr's honor.

"I'm saddened by the senseless actions that took the life of a Fayetteville police officer," U.S. Sen. John Boozman said on his social media accounts. "I offer my heartfelt condolences to the officer's family, friends and the law enforcement community as they mourn this courageous public servant

"This heinous act of violence is a good reminder that law enforcement officers put themselves in harm's way each and every day to protect us," he said. "My prayers and condolences go out to the officer's family and the entire Fayetteville community.

"He will be remembered for his dedication to community, the selfless service he exemplified, and the meaning of the uniform he wore," Womack said. "This tragedy serves as a reminder of the risks our brave men and women in uniform face each day. I join all Arkansans in mourning the loss of Officer Carr and offer my deepest condolences to his family, loved ones, and the Fayetteville Police Department."