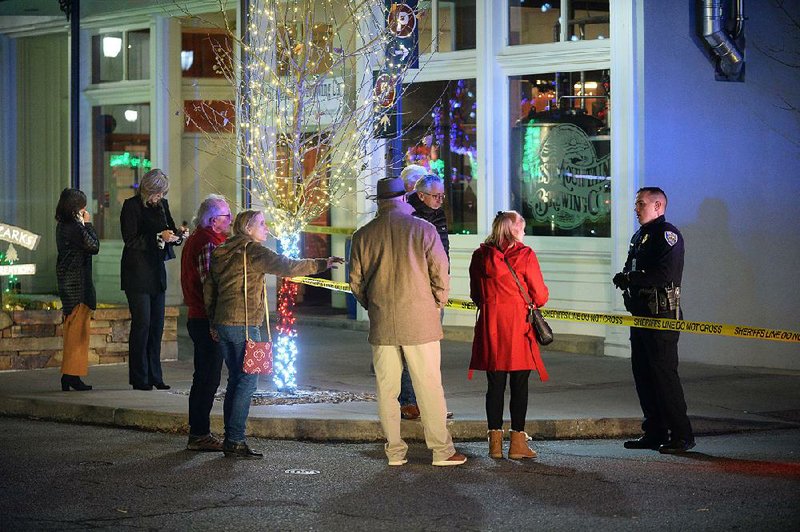 Bystanders ask a police officer about the shooting Saturday night outside the Fayetteville police station. Shots reportedly were heard by people attending the Lights of the Ozarks display on the Fayetteville town square.

FAYETTEVILLE -- A police officer was killed late Saturday in a parking lot behind the police station in Fayetteville.

"It appears the suspect came into the back parking lot and just executed my officer," Police Chief Mike Reynolds said.

"The officer was waiting on his partner to go to Dickson Street and work their beat," Reynolds said. The police chief said the officer was alone in the parking lot near his police cruiser.

Reynolds said the gunman was shot by other officers who responded to the scene and chased the shooter into a nearby alley. He said the gunman fired at the responding officers, and they returned fire.

Reynolds said Fire Department emergency medical personnel were sent to the parking lot and worked on the wounded officer and the gunman, but both died at the scene.

Reynolds said the shooting occurred at 9:40 p.m. He said he had no idea what the gunman's motive for the shooting may have been.

The names of the officer and the gunman weren't released late Saturday.

The FBI has been called to help with the crime scene, and the Washington County sheriff's office was called on to help in the investigation.

"As far as we know right now, we don't believe the public is in any danger," Reynolds said late Saturday.

Fayetteville's Police Department is near the city's square. According to reports, the shots were heard by people attending the Lights of the Ozarks display on the square. No one else was injured, said police spokesman Sgt. Anthony Murphy.

"We think about stuff like this and we know it could happen here, but you hope it never does," he said. "It happened here. Now we're here to pick up the pieces." 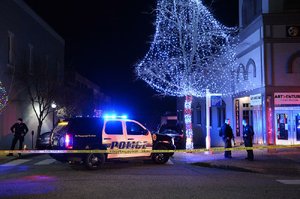