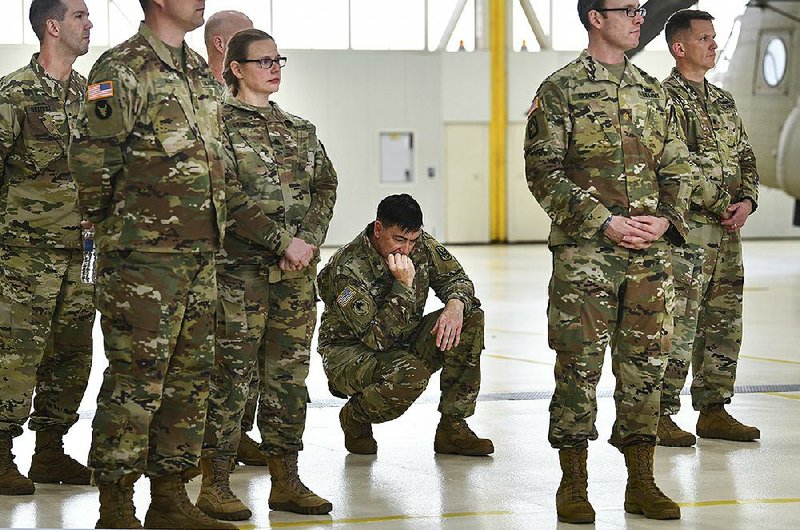 ST. CLOUD, Minn. -- The Minnesota National Guard said the three soldiers who were killed when their helicopter crashed near St. Cloud last week were part of a unit that returned last May from a nine-month deployment to the Middle East.

The Guard identified the men who were killed in Thursday's crash as Chief Warrant Officers 2nd Class James A. Rogers Jr., 28, and Charles P. Nord, 30, and Sgt. Kort M. Plantenberg, 28.

The Guard tweeted that during the unit's recent Middle East deployment, it conducted medical evacuations in support of operations Spartan Shield and Inherent Resolve.

All three soldiers were assigned to Company C, 2-211th General Support Aviation Battalion, which is based in St. Cloud.

The soldiers were killed when their Black Hawk helicopter crashed in a field about 15 miles southwest of St. Cloud. The Guard said the crash happened during a routine maintenance test flight.

A team from Fort Rucker, Ala., was sent to Minnesota to determine the cause of the crash.

Minnesota Gov. Tim Walz, who served in the Guard for 24 years, ordered flags flown at half-staff at state and federal buildings throughout Minnesota until Monday.

"They paid the ultimate price in their service," Walz said in a statement. "Words will never ease the pain of this tragic loss, and the state of Minnesota is forever in the debt of these warriors."

Details released after killing of officer

HUNTSVILLE, Ala. -- Authorities on Saturday identified an Alabama police officer who was killed during a drug enforcement operation and said the man's father was also an officer with the Huntsville Police Department who died in the line of duty.

Billy Clardy was shot in the heart Friday during a drug buy set up by authorities at a residence where they expected a suspect to drop off a large amount of drugs, Huntsville police said.

Authorities said the suspect shot Clardy on the porch and was captured after a short foot chase. Police identified the suspect as LaJeromeny Brown, 41, of Tennessee, news outlets reported.

Police have said Clardy was wearing a bullet-resistant vest when he was shot.

Police Chief Mark McMurray said at a news conference Saturday that Clardy joined the Huntsville police force in 2005 after serving in the military and as a law enforcement officer in other agencies.

Clardy is survived by a wife and five children, according to the police chief.

ASH FORK, Ariz. -- Exposure is suspected in the deaths of a married couple whose bodies were found Friday in snow along a road in rural Arizona where a wintry storm hit a week ago, authorities said Saturday.

"It is possible snow kept their bodies from view for a period of time," the Yavapai County sheriff's office said.

The medical examiner will determine cause of death of Richard Alexander, 74, and Elizabeth Alexander, 79, but authorities said there was no indication of foul play.

Mike and Diane Haas told KNXV-TV that they spotted the bodies in the snow as they left their home along Old Route 66 outside Ash Fork, a small community about 47 miles west of Flagstaff.

The couple's car was found nearby.

They "may have succumbed to weather-related conditions," the sheriff's office said.

NASHVILLE, Tenn. -- A third teenager who escaped a juvenile detention center in Tennessee has been captured after a police pursuit, authorities said.

Morris Marsh, 17, was arrested late Friday in an SUV driven by his brother, the Metropolitan Nashville Police Department said in a statement. Police said Marsh's brother, Rashon Keesee, 26, led authorities on a 15-minute chase before both were arrested at a gas station.

Marsh and three other teens broke out of the downtown facility in Nashville on Nov. 30. Marsh was being held at the juvenile jail on a murder charge, authorities said.

Two other teens who escaped with Marsh have been captured. A fourth teen, 17-year-old Brandon Carruthers, has not been found, police said.

Keesee has been charged with being an accessory after the escape and with evading arrest. The teens' mother, Tewanna Keesee, also has been arrested on an accessory charge, police said.

Investigators said both relatives communicated with Marsh, knew his whereabouts and did not contact police. 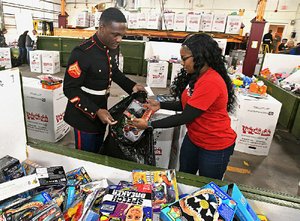 Photo by AP/Erie Times-News/CHRISTOPHER MILLETTE
Cpl. Malcolm Misere and volunteer Yolanda Tann collect toys for a family during the annual Toys for Tots drive coordinated Saturday by the U.S. Marine Corps Reserve Center in Erie, Pa., with help from the Pennsylvania State Police Troop E. The Marines collected about 31,000 toys for 5,000 needy children in the Erie area.