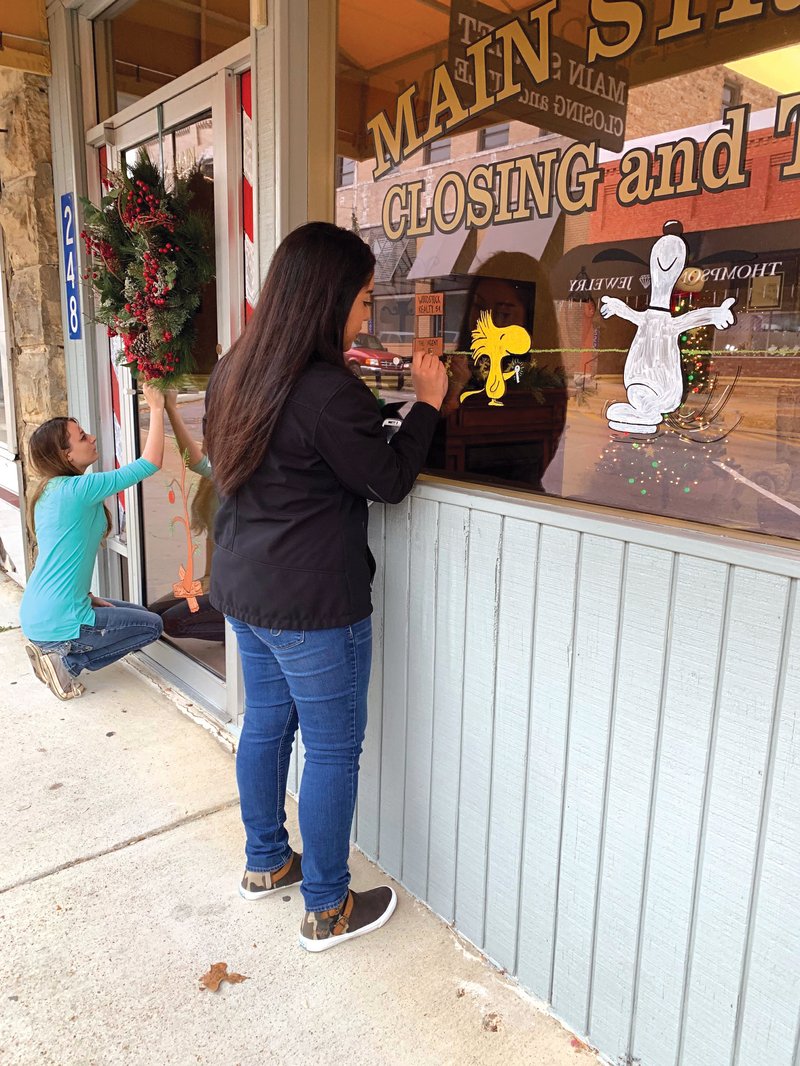 Shelby Shorrock, left, and Alma Medina paint scenes from A Charlie Brown Christmas at Main Street Closing and Title in time for the upcoming Old-Fashioned Christmas, set for Friday and Saturday in Batesville.

BATESVILLE — From gingerbread workshops to Christmas carols, downtown Batesville will come alive with the sights, sounds and aromas of an old-fashioned Christmas this week.

Co-coordinators are Mandi Curtwright, executive director of Main Street Batesville, and Karen Coltharp, with Clara Jane & Jax, who is part of the downtown merchant association.

The Old-Fashioned Christmas started around six years ago, Curtwright said, but it was scaled down a few years ago and renamed A Hometown Christmas. Merchants, however, liked the bigger event, so Main Street Batesville worked to restore the event and include pictures with Santa and loads of vendors lining the streets, as well as setting up inside the Pocket Park.

“The only thing that’s different is there used to be a church that set up a craft fair inside the Barnett Building, which is now the library, so we won’t have the craft fair,” Curtwright said. “We’ll have vendors on the street and things in the Pocket Park.”

This is the first year the event will take place on two days, rather than just one, Curtwright continued.

Angel Nguyen, the vendor coordinator, has helped with craft events all over the state and suggested that having the event over two days would draw more vendors.

“She said if you have it just one day, your larger vendors typically don’t come because by the time they get set up, it’s over,” Curtwright said. “She was right — there’s about 30 or so signed up right now. … For events with vendors, this is our largest so far.”

At the Southern Food Festival last June, for instance, there were 15 vendors besides food/concessions.

Curtwright said organizers plan to bring extra lighting on Friday night, and there will church and school groups caroling.

Saturday will feature live music, along with more activities aimed at kids, such as the barrel train, as well as a petting zoo from Dr. Bill and Carrie Robertson featuring goats, rabbits, pigs, hens and a small pony.

Santa Claus will also be at the library from 1 to 3 p.m. Saturday.

Home Depot will hold its monthly kids workshop event, which is typically at the store, but this month will take place on Main Street as part of the event. Preregistration is required to ensure that there will be enough materials for everyone. Kids will make a wooden snowman ornament.

Gallery 246 will have a birdhouse workshop, which requires a fee, and the Batesville Area Arts Council will offer its annual gingerbread workshop for kids. The Melba Theater will have a free screening of old-fashioned Christmas cartoons with milk and cookies on Dec. 14; coat donations are encouraged.

“The goal, Curtwright said, “is to get more people downtown to shop and take advantage of the things that will be offered. … Right now, the plan is to have most of the events in the Pocket Park block, along with more of the entertainment.”

If the event’s footprint has to be extended, it will incorporate the previous block, where the Old Town Mall is located. The blocks with the county library and The Pinto will stay open, however, Curtwright said.

Live entertainment will be presented both days, with the folk band Gravel Yard Bluegrass Band performing Friday night, while on Saturday, a husband and wife duo from Little Rock billed as Monsterboy will perform their brand of alternative, folk and grunge.

“He plays guitar, and she plays saxophone, and they’re really good. They’re entertaining and interactive. I think they’ll put on a good show,” Curtwright said. “We’ll also have local people up and down the street playing acoustic music on the sidewalk, and then we have churches that will do Christmas carols.”

Another draw is the North Arkansas Dance Theatre company, which will offer a Christmas ballroom performance on Friday. Then on Saturday, members will dance a few scenes from The Nutcracker, which was presented the weekend before Thanksgiving.

Curtwright said she doesn’t have an accurate estimate of how many people turned out for last year’s event, although one estimate on social media put the crowd at more than 2,000, but she did say the downtown merchants noticed a pretty big increase in their foot traffic and kept later hours.

“Several of them intended to stay open late, and I know of three that said at 7 o’clock, their stores were still full,” Curtwright said.

And, she said, many businesses will again stay open later for the Old-Fashioned Christmas event, particularly restaurants and various gift/retail shops. In all, Curtwright said, there are about 52 businesses in the downtown district, although not all are directly on Main Street.

There could soon be one more, as a local resident is planning to bring a brick-oven pizza place to the area.

“So that’ll be exciting. People have been wanting a good pizza place downtown for a long time,” Curtwright said.

She also said 109 owner Beth Christian has indicated that the construction of a deck has been completed at her other restaurant, The Best Dam Steakhouse, and that crew would be moved to the restaurant at 109 E. Main with plans to have renovations done in time to hold Christmas parties there.

The schedule for Old-Fashioned Christmas is as follows (events are held at the Pocket Park unless indicated by an asterisk):

10:30 a.m. – The Nutcracker, performed by the North Arkansas Dance Theatre

1-2 p.m. – Monsterboy, a husband and wife duo from Little Rock