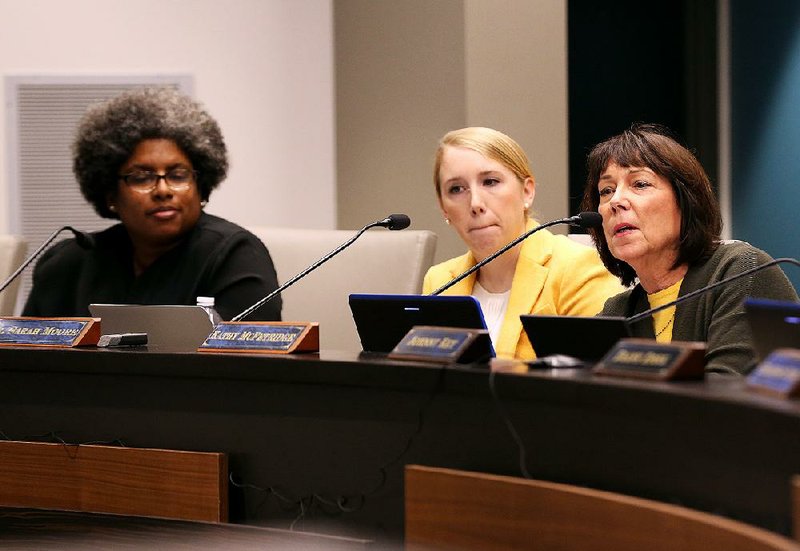 Stacey McAdoo (from left), Arkansas teacher of the year and an ex officio member of the Arkansas Board of Education, attends a board meeting in November with members Sarah Moore and Kathy McFetridge, during which the board voted 5-4 to drastically increase the size of a new personnel policy committee for the Little Rock School District.

After a false start, the process of selecting teacher members to the Little Rock School District's inaugural personnel policy committee is underway.

The two-week period in which teachers went online to nominate co-workers to represent them started Nov. 22 and ended Friday, according to the election process timeline put out by the school district.

All of the nominees for committee membership will be announced Monday , Robert Robinson, the district's executive director for human resources, said.

The online election round will begin Friday and go through Jan. 10, with election results to be announced Jan. 17, according to the timeline.

The newly formed state-mandated committee of teachers and three district administrators is to begin meeting early in the second semester of this school year. One of the committee's first tasks will be to establish bylaws.

The district's personnel policy committee is to be similar to employee committees that are required by law for all other school districts in the state. The committees are made up of teachers who are elected by their colleagues, and district administrators. The committees respond to and offer advice to school boards on teacher-related matters, including salaries and policies.

Until this year, state law exempted the Little Rock district from having a personnel policy committee because the district engaged in collective bargaining. That exception was eliminated earlier this year by Act 728.

The state Education Board formally voted Oct. 10 to end collective bargaining. By that time, Little Rock district leaders had already arranged for the American Arbitration Association, a nonprofit organization in New York City, to conduct the committee elections.

In November, with the teacher nomination round nearly complete, the state Education Board voted 5-4 to increase the committee's size from eight teacher members -- three from elementary schools, two each representing the middle and high schools and one special-services employee such as a speech pathologist -- to one teacher representative per campus. That resulted in nullifying the initial nominating round and restarting the process.

Education Board member Kathy McFetridge of Springdale, who called for the larger committee, said a similarly structured committee in the Springdale School District worked well.

She and others on the state board said they did not initially realize that the Little Rock district had planned for a smaller group.

Education Board member Sarah Moore of Stuttgart said that having a committee representative in every building assures greater communication among teachers and their representatives.

"It's unfair to have such a small number on the committee in such a large district," Moore said.

Moore suggested that any challenges posed by having such a large group could be overcome with the use of subcommittees.

A proponent for keeping collective-bargaining rights in the district, McAdoo told the Education Board that the initial election had been well publicized to faculty members and that teachers had every opportunity to have their voices heard through school committees and through the building representatives to the Little Rock Education Association.