Pokémon are everywhere and so is their game 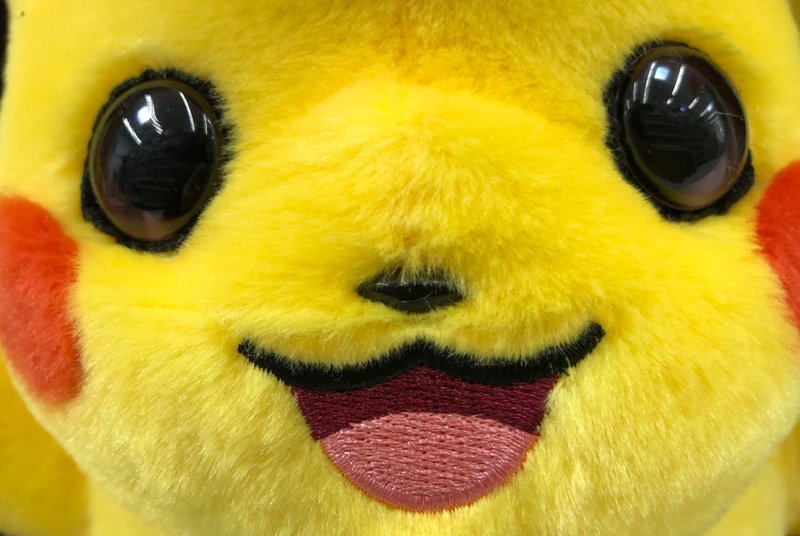 Fierce but friendly Pikachu is the mascot of all the Pokemon. (Arkansas Democrat-Gazette/CELIA STOREY)

Pokémon is the highest-grossing entertainment franchise of all time. Having acquired a whopping $90 billion since its conception in 1995, it continues to grow in popularity, its demographic constantly widening at an unprecedented rate.

Consider the case of veteran actor Bill Nighy, who played Clifford Enterprises founder Howard Clifford in the film Detective Pikachu. When speaking about his time on set, Nighy remarked that he had been "generationally disqualified" from Pokémon in the franchise's early days but had since found joy in discovering the wonders of the encyclopedic Pokédex book.

This affection, fostered at the age of 69 (he'll be 70 on Thursday), is a sign of a broader trend: It is simply impossible to escape Pokémon in 2019.

It is an entity that has deeply affected universal society — for the better — connecting people of all ages and from opposite ends of the world to one another for more than two decades. It is a game, a world, that is founded upon fun, discovery, exploration and what it means to wonder, to imagine and to dream.

As the franchise has grown, the fictional world of Pokémon has become ever more entwined with our own. Once, the franchise was just an anime series, a trading card community and a pair of ambitious games for the Game Boy Classic. Now, there is a mobile game played by millions of people all over the world, with Nov. 15 marking the behemoth series' first mainline venture onto home consoles via the games "Pokémon Sword" and "Pokémon Shield."

Pokémon are no longer merely a figment of the imagination, some intangible fancy pondered by youngsters as their imaginations blossom. The franchise unites generations in a shared passion for something wholesome, positive and deeply invested in community.

The augmented reality of Pokémon Go is the bridge connecting the real world to the virtual world of Pokémon. Nowadays, simply looking through the lens of a phone camera can reveal a Pidgey nestled amid autumnal foliage, a Squirtle riding the inward tides or, terrifyingly, a Mr. Mime comfortably plopped on your living room couch, sizing you up with those ghastly eyes. (As if Mr. Mime wasn't already frightening enough, I recently realized that it's not actually wearing clothes: Those blue growths protruding from its head and its curled clown feet are actually part of its body.)

However, it is the community behind Pokémon Go that makes it special. For example: although game-maker Niantic recently announced it would be introducing an official player vs. player league, or PVP League, to Pokémon Go in early 2020, dedicated fans have made do since the app's launch back in 2016, with popular Pokémon resource community The Silph Road having arranged The Sinister Cup, an annual competitive circuit designed by the fans, for the fans.

Events known as Go Fests have been held in cities all over the world, inviting all ages to congregate.

One particular show of communal solidarity stands out. Earlier this year, players from Salamina — the largest Greek Island in the Saronic Gulf — lost access to Pokémon Go. Affected players appealed to Reddit in search of a solution, and seven months later, Eurogamer reported that Niantic had rectified the issue.

"Last night a member of our community opened Pokémon Go and came across a huge surprise," a player wrote on Reddit in a thread. "After seven months of no spawns, the whole Saronic Gulf, including islands Salamina, Aegina, [Agistri] and Poros, is once again full of them. Our combined efforts gave us a great victory, and from last night, we are once again able to go out and hunt!"

There may have only been 80 avid players in Salamina, but thousands of others banded together to help them get their game back.

Catching Pokémon in your area is a curiously affecting thing. Thanks to Niantic's real-world mapping, playing Pokémon Go converts your local area into a world teeming with fictional creatures. Similarly, Pokémon properties are beginning to align the world of Pokémon with our own in an unsubtle way: the Galar region from "Sword" and "Shield," for example, is based on the United Kingdom.

The accessible world of Pokémon Go is a prototype of the congenial societal makeup of Rime City from the film Detective Pikachu, which grossed more than $430 million at the box office. Rime City is a place where people and Pokémon live in harmony — not as master and pet (or whatever you call a Pokémon companion), but as co-workers, neighbors and fellow citizens. Now, in our world as in the fictional metropolis, Pokémon extend far past the boundaries of media, permeating reality as an inescapable global phenomenon.

But there's far more to it than just fitness goals and local landmarks: Pokémon has always been something that brought people together. Recently, a toxic segment of the Pokémon fandom emerged from the shadows and betrayed the overall community's sense of wholesomeness. Disappointed by the executive decision to cut the National Dex from Pokémon — a Pokédex featuring every creature ever designed — this splinter faction spat hate at developers, labeling the phenomenon "Dexit." The community at large responded by creating a "ThankYouGameFreak" hashtag on Twitter, which fans all over the world used to share personal stories of how Pokémon helped them in some special way.

[RELATED: Pokémon Go is alive and kicking in Arkansas]