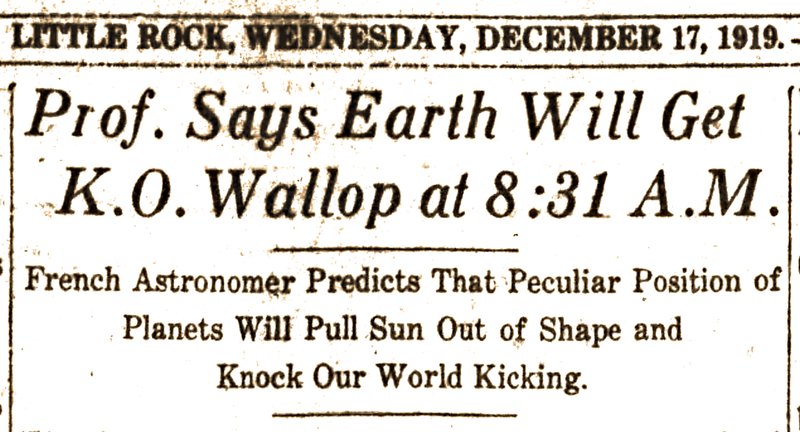 Headlines from the Dec. 17, 1919, Arkansas Gazette -- a day predicted as the end of the world by Professor Allen F. Porta, who was most assuredly not a French astronomer. (Arkansas Democrat-Gazette)

This was a day that the world was supposed to end at 8:31 a.m., according to a widely quoted meteorological expert with the University of Michigan, who obviously got something wrong.

Less obviously, Professor Albert F. Porta was not an expert in meteorology.

He had no training in meteorology.

He also had nothing to do with the University of Michigan.

This is a story about credentials.

In the Dec. 6, 1919, Arkansas Gazette, under the headline "Coming Planet Grouping Interests Scientists," a story from the Kansas City Star quoted one "Prof. Allen F. Porta, a European meteorologist" as predicting that a rare alignment of six planets was going to draw vast electro-magnetic explosions off the sun. Supposedly, his predictions had so alarmed the (suspiciously legendarily alarmist) people in Mexico that no less than a dozen had committed suicide.

The United States, he says, will be swept by "the most fearful weather cataclysms experienced since human history began." A gigantic explosion of flaming gases will occur on the sun, he predicts, and these will leap hundreds of thousands of miles out into space.

Oddly, Porta alone among the world's scientists expected the end of everything. The article quotes O.H. Truman of the Lowell Observatory at Flagstaff, Ariz., as scoffing at the notion. While, yes, around Dec. 17, six planets — Neptune, Saturn, Jupiter, Mars, Venus and Mercury — would be roughly in the same direction from the sun, that had happened before.

The great astronomer Prof. David Todd of Amherst College planned to view the alignment from the heights of a mountain in the Andes.

A famed Jesuit astronomer, Father William F. Rigge, also pooh-poohed Porta's prediction: "Saturn, Mars, Venus and the great sun Regulus were all in line twice before this year and nothing exciting occurred." A French astronomer named Camille Flammarion was sure it would be a fine sight:

"Let the lover of the beautiful make the effort to rise about 5 o'clock in the morning and look out of a window toward the east; he will not regret the effort and will have presented to his charmed gaze one of the most marvelous sights that it is possible to imagine, especially if he be able to transport himself in spirit toward the far-off worlds, toward the land of the skies, sisters of the floating island whereupon the destinies of our humanity roll ..."

But this guy Porta said, no, it would be very bad. The planets were linked to the sun by great chains of electromagnetic energy whose compelling forces counteracted each other to hold each planet in its regular path. Whenever two planets wheeled into such position that they pulled together on the sun, their united pull caused gases to explode — to leap into space in a whirling volcano known to astronomers as a sunspot. On Dec. 17, he said, a "League of Planets" would so align that their combined electro-magnetic influence would spear the sun.

"I make this startling prophecy with no desire to be merely sensational or alarming," Professor Porta declares. "It is merely because my study of the planets has revealed certain things with mathematical certainty that I now say: be warned in advance. Tremendous things are going to happen from December 17 to December 20 and afterward."

The New York Times talked to other actual astronomers who discredited the theory, and yet somehow the Times repeated mistaken information that Porta worked at the University of Michigan, which he did not.

According to an eye-popping history of this affair by the University of Michigan's Heritage Project, Alberto Francisco Porta was born in 1853 in Italy. He studied architecture and civil engineering. After service work rebuilding earthquake-damaged churches in Central America with the Society of Jesus, he moved his family to the San Francisco Bay area where they witnessed the devastating 1906 earthquake. He taught mechanical drawing, civil engineering, architecture and geometry at a small Jesuit school, Santa Clara College.

He was no longer employed at the college when the priest in charge of the school observatory hired him temporarily in 1913 to do some math calculations about sunspots.

In 1915, Porta set himself up as a weather- and earthquake-forecasting institute — Instituto delle Scienze Planetarie, the Institute of Planetary Sciences. There was no telescope at the institute. Porta had no scientific apparatus there at all. Instead, he had a copy of a federal booklet, American Ephemeris and Nautical Almanac, which annually published the movements of the Earth, Sun, Moon and stars.

Porta began commenting about weather and sunspots to the town newspaper.

The priest who had employed him was furious and denounced him. But that didn't matter. Porta's local newspaper picked up his predictions. Then somebody at the Oakland Tribune in Oakland, Calif., decided to syndicate his monthly weather predictions for the entire country.

They do not appear to have been published in Arkansas newspapers. And Proud Reader will be gratified to know that neither the Arkansas Democrat nor the Gazette bought into Porta's doomsday. The Democrat on Dec. 13 called it a "bunk prediction," in reporting that 500 university students in Puerto Rico had petitioned the school to recess so they could spend the end of the world with their families.

Dec. 17 found mocking reports in both papers, although both made unsourced and I think shameful assertions that black people were a little worried. While minimizing the "K.O. Wallop," Page 1 of that day's Gazette, oddly, promoted Porta from "European meteorologist" to "French astronomer."

In noting that the world had refused to end, the Democrat’s editorial writer added, “Good old world.”

Skeptics abounded, but still, The Heritage Project reports, the National Weather Bureau in Washington fielded many phone calls and telegrams. In Oklahoma, zinc and lead miners refused to go underground. Churches held special prayer services. In Canada and Wisconsin, partiers boozed it up. A woman in New York killed herself in despair. At Indianapolis, a railyard whistle throttle got stuck, and it wouldn't stop shrieking. Around town, people in charge of bells and whistles decided to ring theirs, too. One woman told a reporter, "The whistles are calling the people to church, and I'm going."

With lessons of the Porta mess in mind, check out the claim over a photo in the Dec. 8 Gazette. 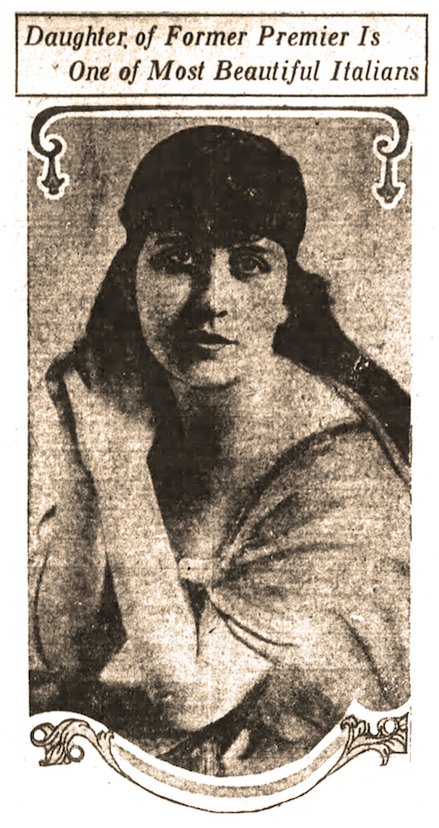 Below the photo of some woman, we read this:

Miss Carlotta Orlando, daughter of ex-Premier Orlando of Italy, who is considered by many the most beautiful girl in Italy, became a national favorite during the war by her work and sacrifices for the army and people generally. Miss Orlando led girls of her own age in many worthy enterprises during the long struggle. She is talented and accomplished and is a favorite in Italian social circles.

Oh, yeah? Says who? And why was that even news?

Skepticism, once awakened, finds cause for questions everywhere.