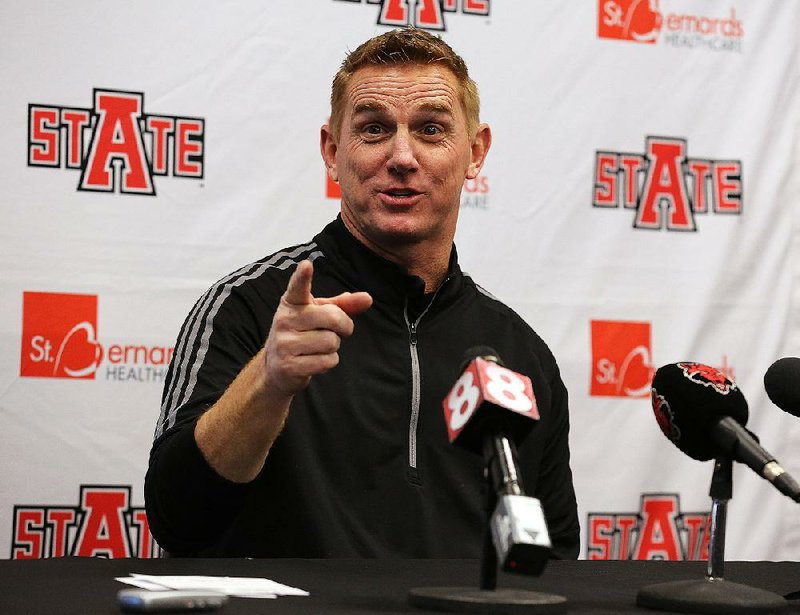 For the second time in three seasons, the Arkansas State University football team is headed to the Camellia Bowl.

The Red Wolves (7-5) learned Sunday during bowl announcements that they'll face Florida International (6-6) on Dec. 21 at Cramton Bowl in Montgomery, Ala. Kickoff is set for 4:30 p.m. The game will air on ESPN.

"We're excited about the opportunity to play in a bowl game for the ninth straight year," ASU Coach Blake Anderson said in a statement. "The Camellia Bowl offers a great experience for our players, and the hospitality shown by Montgomery is fantastic. We're looking forward to getting back on the field for another game with the opportunity to finish our season strong."

ASU last appeared in the Camellia Bowl in 2017, falling to Middle Tennessee State 35-30. The Red Wolves, who are making their ninth consecutive bowl appearance, are seeking their first bowl victory since the 2016 Cure Bowl victory over Central Florida. ASU is 1-4 in bowl games during Anderson's tenure.

Florida International, which has gone 23-15 in three seasons under Springdale native Butch Davis, has not met ASU since 2012, the Panthers' final season in the Sun Belt. ASU leads the all-time series between the two schools, 6-2.

With a victory over Florida International, the Red Wolves can claim a season of eight or more wins for the fourth time under Anderson and the seventh time since 2011.

Sunday's bowl announcement came after what had been an uncertain week regarding Anderson's future at ASU.

The St. Louis Post-Dispatch reported Wednesday that Anderson had been in contact with University of Missouri officials regarding the Tigers' head coaching job and that there was mutual interest. Missouri fired Coach Barry Odom on Nov. 30 after he went 25-25 overall and 13-19 in the SEC in four seasons.

Anderson declined to comment on the report linking him to Missouri when the Arkansas Democrat-Gazette reached him Wednesday evening, stating that he was on the road recruiting for ASU.

ASU Athletic Director Terry Mohajir had went on radio earlier Wednesday on 95.3-FM, Jonesboro, and was asked if any schools had reached out about Anderson.

"There's a lot of people that like Coach Anderson, I'll just tell you that," Mohajir said. "More than one or two schools."

But by Sunday evening, days of speculation and uncertainty came to an end when ESPN reported that Missouri had reached a deal with Appalachian State Coach and former ASU assistant Eliah Drinkwitz, who in his first season led the Mountaineers to a 12-1 record and the Sun Belt Conference championship following a 45-38 victory over Louisiana-Lafayette on Saturday.

Anderson, who's in his sixth season at ASU, is scheduled to speak with the media today in Jonesboro at 11:30 a.m.