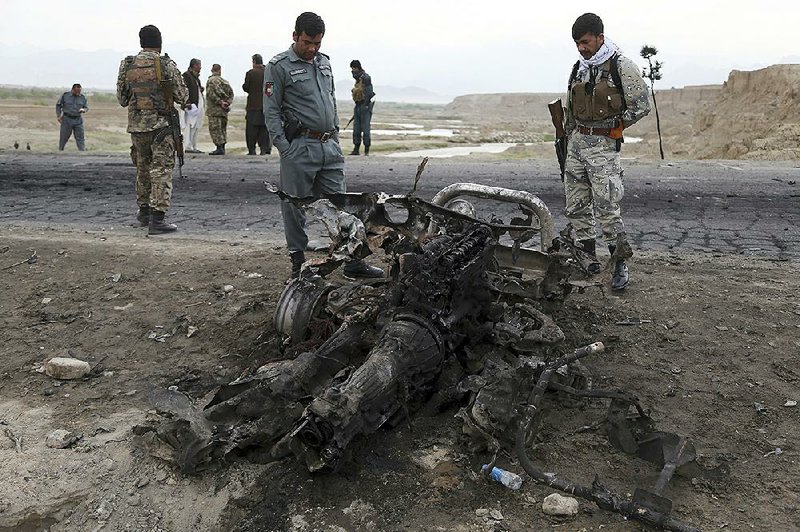 A roadside bomb that detonated in April near Bagram Air Base north of Kabul, Afghanistan, killed three American service members and a U.S. contractor. More than 2,200 U.S. troops have been killed since the war in Afghanistan began in 2001.

WASHINGTON -- Thousands of pages of documents detailing the war in Afghanistan released by The Washington Post on Monday paint a stark picture of missteps and failures -- and those assessments were delivered by prominent U.S. officials, many of whom had publicly said the mission was succeeding.

The U.S. military achieved a quick but short-term victory over the Taliban and al-Qaida in early 2002, and the Pentagon's focus then shifted toward Iraq. The Afghan conflict became a secondary effort, a hazy attempt at nation building, with intermittent troop increases to conduct high-intensity counterinsurgency offensives -- but, overall, with a small number of troops carrying out an unclear mission.

Even as the Taliban returned in greater numbers, and troops on the ground voiced concerns about the U.S. strategy's growing shortcomings, senior U.S. officials almost always said that progress was being made.

The documents obtained by The Washington Post show otherwise.

"We were devoid of a fundamental understanding of Afghanistan -- we didn't know what we were doing," said Douglas Lute, a retired three-star Army general who helped the White House oversee the war in Afghanistan in both the George W. Bush and Obama administrations.

"What are we trying to do here?" he told government interviewers in 2015. "We didn't have the foggiest notion of what we were undertaking."

The 2,000 pages of interviews were obtained through a Freedom of Information Act request and years of legal back-and-forth with the special inspector general for Afghanistan reconstruction, according to The Post. Formed in 2008, the office has served as a government watchdog for the war in Afghanistan, releasing reports quarterly on the conflict's progress, many of which publicly depicted the shortcomings of the effort.

In one interview obtained by The Post, a person identified only as a senior National Security Council official said that the Obama White House, along with the Pentagon, pushed for data that showed President Barack Obama's announced surge in 2009 was succeeding.

"It was impossible to create good metrics. We tried using troop numbers trained, violence levels, control of territory and none of it painted an accurate picture," the official told interviewers in 2016, according to The Post. "The metrics were always manipulated for the duration of the war."

The documents also quote other officials close to the 18-year war effort describing a campaign by the U.S. government to distort the grim reality.

"Every data point was altered to present the best picture possible," Bob Crowley, an Army colonel who served as a counterinsurgency adviser to U.S. military commanders in 2013 and 2014, told government interviewers, according to The Post. "Surveys, for instance, were totally unreliable but reinforced that everything we were doing was right and we became a self-licking ice cream cone."

In 2010, this pressure trickled down to troops on the ground, as they answered to commanders eager to show progress to senior leaders, including Gen. Stanley McChrystal, then the commander of all U.S. troops in Afghanistan. But the facts were that the fledgling Afghan military performed poorly in the field and that the U.S. "clear, hold, build" counterinsurgency strategy had little hope of succeeding.

"Afghans knew we were there temporarily, and that affected what we could do," Marc Chretien, who served as the senior State Department adviser to the Marines in Helmand province, said in one interview. "An elder in Helmand once told me as much, saying: 'Your Marines live in tents. That's how I know you won't be here long.'"

The Pentagon released a statement Monday saying there has been "no intent" by the department to mislead Congress or the public.

Defense Department officials "have consistently briefed the progress and challenges associated with our efforts in Afghanistan, and DoD provides regular reports to Congress that highlight these challenges," said Lt. Col. Thomas Campbell, a department spokesman. "Most of the individuals interviewed spoke with the benefit of hindsight. Hindsight has also enabled the department to evaluate previous approaches and revise our strategy, as we did in 2017 with the launch of the president's South Asia strategy."

'GOVERNMENT IN A BOX'

The tension between rosy public statements and the reality on the ground has been one of the enduring elements of the war. Now, 18 years in, the U.S.-led mission in Afghanistan has all but cut off outside access to U.S. troops on the ground in an attempt to execute their mission in near-secrecy.

Jeffrey Eggers, a former Navy SEAL who served as a strategic adviser to McChrystal, the commander of U.S. forces in Afghanistan from 2009 to 2010, pointed out a failed plan in 2010 to seize control of Marja, a Taliban stronghold in Helmand province, after a long battle there.

McChrystal and a number of senior Pentagon civilians had repeatedly told reporters before the battle that they had "a government in a box" ready to install in Marja to provide public services to civilians. But the plan to pacify the stronghold failed and came to symbolize larger problems with the counterinsurgency strategy, The Post reported.

"One of McChrystal's hardest lessons was his government-in-a-box program which typified the American wartime machinery, and he thought you could simply wave a magic wand and POOF!" Eggers told investigators.

When discussing the state of the war in 2009, Barnett Rubin, who served as the senior adviser to the U.S. special representative for Afghanistan and Pakistan from 2009 to 2013, described the U.S. strategy in much starker terms. "But we were doing [counterinsurgency] as colonial power," he said in a 2017 interview. "Afghans knew this influx of funds wouldn't last, and they wanted to make the best of the windfall without endangering themselves. It was a fantasy that we could do that."

The Washington Post said the new document trove has a precedent in the Pentagon Papers but also drew distinctions with that 7,000-page study of the Vietnam War, which was based on internal government documents kept secret until published in 1971 by The New York Times and The Post.

In contrast, The Post describes the new documents as drawn from interviews conducted between 2014 and 2018 that were used by the inspector general for Afghanistan reconstruction to write a series of unclassified "Lessons Learned" reports that have been publicly released.

"About 30 of the interview records are transcribed, word-for-word accounts," The Post said. "The rest are typed summaries of conversations: pages of notes and quotes from people with different vantage points in the conflict, from provincial outposts to the highest circles of power."

Since 2001, more than 2,200 U.S. troops have been killed in Afghanistan, along with hundreds from allied countries that have contributed forces to the war. Since 2014, after the Pentagon officially ended "combat operations," putting the Afghan military in the lead, more than 50,000 Afghan security troops have died. And the military effort has cost the United States more than $1 trillion.

Of the $133 billion that the United States has spent on reconstruction programs in Afghanistan, about $83 billion went toward training the Afghan army and police forces, according to the inspector general.

"If you look at the overall amount of money spent in Afghanistan, you see a tiny percentage of it went to help the people of the country," Robert Finn, the U.S. ambassador to Afghanistan in 2002 and 2003, told investigators. "It almost all went to the military and even most of that money went for local militia and police training."

The Washington Post published its report just as talks between the United States and the Taliban have restarted for another round of peace negotiations in Doha, Qatar. In September, President Donald Trump abruptly called off months of the talks after a suicide blast in Kabul killed a U.S. soldier and 11 others.

During a trip to Bagram Airfield in Afghanistan over the Thanksgiving holiday, Trump said the United States would stay in Afghanistan "until such time as we have a deal, or we have total victory, and they want to make a deal very badly." Trump also reaffirmed that he wanted to reduce the U.S. military presence in the country to 8,600 troops, down from about 12,000 to 13,000.

In one 2003 memo cited by The Post from Donald Rumsfeld, the defense secretary at the time, he declared, "I have no visibility into who the bad guys are."

Democrats on Capitol Hill were quick to endorse the story's findings.

Rep. Ted Lieu, D-Calif., tweeted: "The war in Afghanistan is an epic bipartisan failure. I have long called for the withdrawal of U.S. troops from that quagmire. Now it appears U.S. officials misled the American public about the war. It is time to leave Afghanistan. Now."

Sarah Kreps, professor of government and international relations at Cornell University, said the interviews reveal the disconnect between what civilian and military leaders knew about the war and what the public knew, particularly about its costs.

The Post said that while the interviews contain few revelations about military operations in the war, they include a lot of criticism that rebuts the narrative that officials often touted about progress being made.

James Dobbins, a former senior U.S. diplomat who served as a special envoy to Afghanistan under George W. Bush and Obama, was blunt in his assessment of the war in his interview.

Information for this article was contributed by Thomas Gibbons-Neff of The New York Times; and by staff members of The Associated Press.