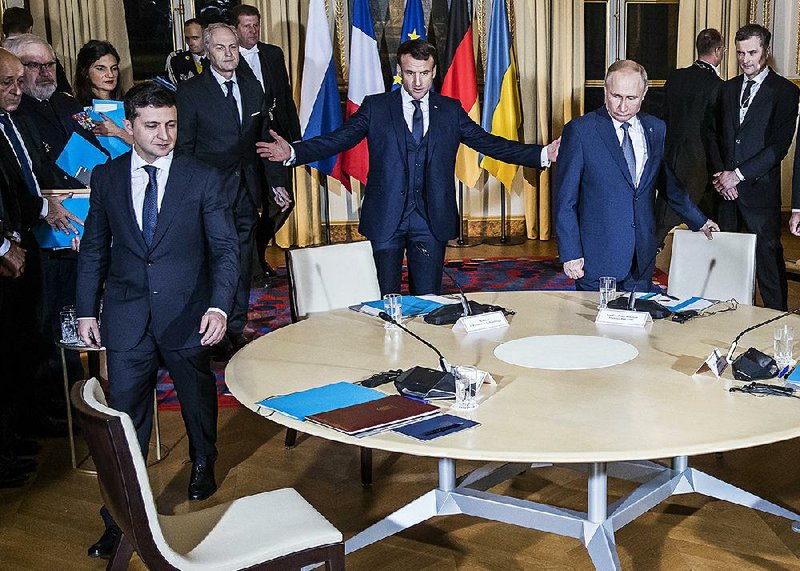 French President Emmanuel Macron (center) ushers Ukrainian President Volodymyr Zelenskiy (left) and Russian President Vladimir Putin to their seats Monday at the Elysee Palace in Paris during a summit where leaders sought to find a way to end the fighting in eastern Ukraine. More photos are available at arkansasonline.com/1210paris/.

PARIS -- Russian President Vladimir Putin and Ukraine's Volodymyr Zelenskiy agreed to a renewed cease-fire and to exchange all known prisoners when they met for the first time in Paris on Monday, making modest gains in peace talks designed to end a deadly war in eastern Ukraine.

It was the first effort in three years to wind back a bitter war that has cost 13,000 lives and resulted in the loss of Ukraine territory to separatists backed by Moscow.

"We have said once again how important it is to have a dialogue between parties," Putin said.

Zelenskiy said the meeting itself was "a big step toward peace."

The talks yielded enough progress to get the peace process moving, but as expected there was no major breakthrough.

"We haven't found the magic wand, but we have relaunched talks," said French President Emmanuel Macron, who convened the gathering. He said the talks had made "practical, tangible progress."

The parties agreed to meet again in four months to discuss one of the stumbling blocks: conditions for elections in eastern Ukraine, which would then lead to special status for the regions.

[Video not showing up above? Click here to watch » https://www.youtube.com/watch?v=K2PeO5v5wcY]

The Ukrainian president has declared that there can be no elections in those regions until all military formations have withdrawn.

Russia is under U.S. and European sanctions for its actions against Ukraine, including its annexation of Crimea in early 2014 and its military support for separatists who carved off a chunk of eastern Ukraine.

The talks on Monday involved a series of meetings. German Chancellor Angela Merkel and Zelenskiy arrived at the French presidential residence, the Elysee Palace, around 3 p.m. Putin arrived about 15 minutes later. Zelenskiy first met with Macron and then Merkel. After a meeting of all four leaders, Putin and Zelenskiy held a one-on-one session, according to Elysee officials, which was followed by an official dinner.

Tass, the state-owned Russian news agency, reported the two had a 10 to 15 minute one-on-one meeting after an hourlong session that included the Russian and Ukraine leaders and their delegations.

Interfax reported that Russia and Ukraine also spoke -- but failed to reach agreement -- on the renewal of a gas transit deal involving Russian gas piped via Ukraine to Europe. Transit fees on Russian gas are crucial to Ukraine, worth about $3 billion a year to its budget.

Both Ukraine and Russia have accused each other of violating previous cease-fires.

Zelenskiy said he wanted a genuine, lasting cease-fire with clear obligations on both sides, not a "fake" one, where shooting started again after a few days. "A serious ceasefire means not shooting, as I understand it, one with clear terms and obligations."

He urged Russia to exert its influence and added: "I am convinced we will see a cease-fire by the end of this year."

The parties also agreed to set up three more zones of disengagement on the front line of the conflict.

Putin, meanwhile, is seen as unlikely to give up Russia's long-term strategic objective of keeping Ukraine firmly in its geopolitical backyard, rather than see it pivot further to the West and join NATO.

Delivering peace was Zelenskiy's biggest campaign promise in his upset April victory against Petro Poroshenko, the man who led Ukraine since close to the start of the 2014 conflict.

But some Ukrainians fear that Zelenskiy will make too many compromises with Putin.

On the eve of the talks, Zelenskiy's political opponents rallied in the Ukraine capital Kyiv, warning that the Ukrainian president should not surrender to Putin.

Poroshenko told the rally no good could come of the talks.

"Don't trust Putin. Never. At all. Putin manipulates with everything: content, facts, numbers, maps, emotions. He hates Ukraine and Ukrainians and does not see our place on the political map of Europe," warned Poroshenko.

Mykhailo Onipchenko, a businessman, said in an interview he doubted Zelenskiy would succeed, "but at least he will better understand who Putin is.

"Ukraine's goal is to become free and to restore unity, and Putin's goal is to destroy our liberty and sovereignty. And Zelenskiy doesn't understand that it will be like a sheep negotiating with the wolf," he said, describing the talks.

"We are engaged in negotiations on the weaker side. And that U.S. support is part of the leverage we have," said Bohdan Yaremenko, the chairman of the foreign affairs committee of the Ukrainian parliament.

Information for this article was contributed by Natalie Gryvnyak of The Washington Post.