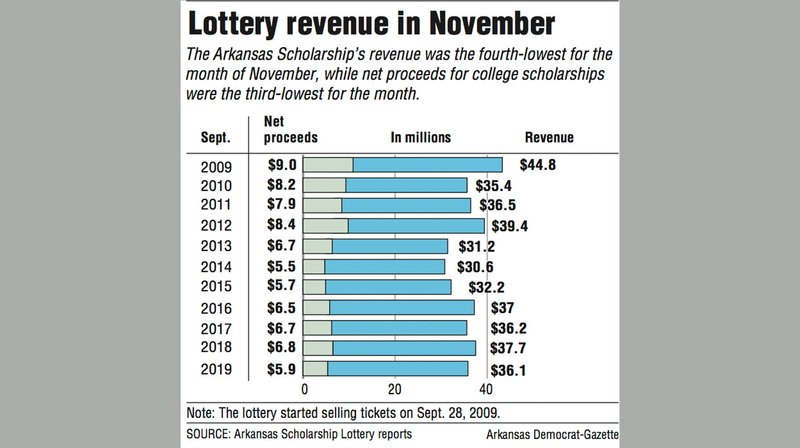 The Arkansas Scholarship Lottery's November revenue and the amount raised for college scholarships dipped from the same month a year ago as revenue from scratch-off and draw game tickets dropped.

The lottery's scratch-off ticket revenue fell last month by about $828,000 from November a year ago to $30 million, while draw game ticket sales slipped by about $750,000 to $6 million, the lottery reported Tuesday in its monthly report to Gov. Asa Hutchinson and the Legislative Council's lottery oversight subcommittee. The lottery's revenue also included about $47,000 in fees paid by 1,965 retailers.

Net proceeds -- the amount raised for college scholarships -- decreased from $6.8 million in November 2018 to $5.9 million last month, according to the lottery.

Lottery Director Bishop Woosley on Tuesday attributed the declines to the spillover impact of a $1.5 billion Mega Millions jackpot and a $700 million Powerball jackpot in October of 2018.

"After you have a huge jackpot like we did last October, you often see a halo effect wherein the people who bought tickets during that jackpot run slowly ... back to the stores to cash their winning Powerball or Mega Millions tickets," Woosley said in a written statement. "This often leads in them churning that prize back into the lottery.

"Last October we had roughly [$]20+ million in draw sales in 2-3 weeks. The halo impact from that likely impacted the sales difference last month. We saw the first two weeks of this year being a bit soft in sales versus the last week or two which [were] very strong," he said.

The Arkansas Scholarship Lottery started selling tickets on Sept. 28, 2009, more than 10 years ago.

The total amount awarded for those scholarships peaked at $132.9 million in fiscal 2013. That's dropped since then, largely as a result of the Legislature cutting the amount of the initial scholarship three times in 10 years.

November is the fifth month of fiscal 2020.

Woosley said he hopes there will be jackpots exceeding $500 million before the end of the fiscal year on June 30.

"However, low interest rates [on jackpot funds] and bad luck in the jackpots getting hit at lower levels are hindering draw game sales tremendously this year. The MUSL group is looking at changes to Powerball, but that would not occur this fiscal year," he said. MUSL is the Multi-State Lottery Association.

At the end of each fiscal year, the lottery transfers the balance of its unclaimed prize reserve fund minus $1 million to college scholarships.

On Nov. 30, the lottery reported a balance of $5.9 million in its unclaimed prize reserve fund, after adding $864,775.18 in unclaimed prizes in November.

For fiscal 2020, Woosley has projected total revenue of $497 million and net proceeds for college scholarships at $89.3 million, in what he has described as a conservative forecast.

On fiscal 2020, Woosley said, "We are up in instant ticket sales versus last year, which was a record year, and are a large jackpot away from being even in draw sales." Instant tickets also are called scratch-off tickets.

"Our last week of November in instant ticket sales was very strong and our new games are selling very well. If historical trends hold, we should have a decent jackpot run soon that will allow us to catch up to budget," Woosley said.

As for the impact of Arkansas' casinos, Woosley said the lottery has seen a drop in scratch-off ticket revenue only in one of three counties in which casinos operate.

Oaklawn Racing Casino Resort is in Garland Count, and the Saracen Casino opened in its gambling annex in Jefferson County in late September.

In fiscal 2020, the Arkansas Division of Higher Education projects 33,315 students will receive Arkansas Academic Challenge Scholarships totaling $94.6 million -- up from the 32,386 students that received $91.2 million in these scholarships in fiscal 2019.

The 2017 Legislature created the Workforce Challenge Scholarship program to use excess lottery proceeds to provide up to $800,000 a year for students enrolled in higher-education programs that lead to them being qualified to work in high-demand occupations.