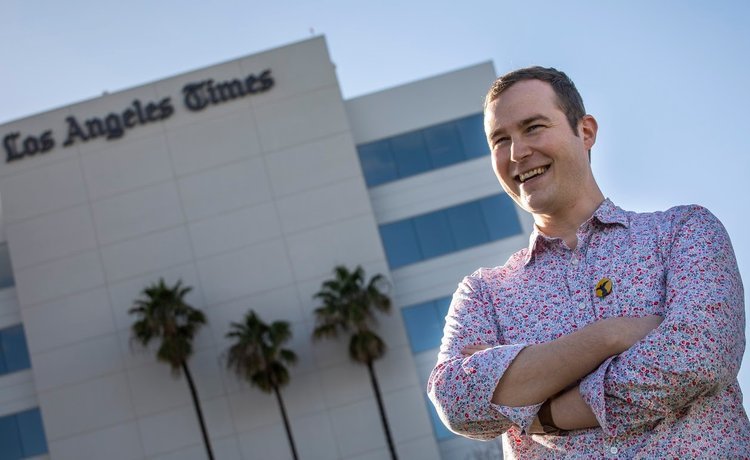 Jon Schueller, a south Arkansas native and former online editor for the Northwest Arkansas Democrat-Gazette, was elected Tuesday as international president of the Newsguild-CWA. ( Jon Schueller )

A south Arkansas native and a former online editor at the Northwest Arkansas Democrat-Gazette was elected Tuesday as international president of the largest journalism union in North America.

Jon Schleuss, 32, beat 12-year incumbent Bernie Lunzer to lead the NewsGuild-CWA, a union representing roughly 20,000 journalists and other workers in the U.S. and Canada, according to a news release provided by the guild.

While campaigning, Schleuss ran on a platform of reforming and modernizing the union.

"I could not be more honored, humbled and inspired by the faith and trust my fellow Guild members have placed in me," Schleuss said in the release. "While I have won the office of President of the NewsGuild, the real winners here are the members who organized, mobilized, and claimed the future for their union and for themselves.”

Schleuss’ four-year term begins immediately, and he will work out of the guild’s headquarters in Washington, D.C., the union said.

Schleuss, who has been a data and graphics reporter at the Los Angeles Times since 2013 and helped organize its first union, said in an interview Wednesday he will have to leave his job there to take on his new role, but he wasn’t sure when that would happen.

“As the industry continues to change beneath our feet, it’s imperative we organize more newsrooms, big and small,” Klamann said in the release. “Under Jon, I know supporting those efforts will be a priority.”

The guild invalidated an earlier election that declared Lunzer the winner by a margin of 261 votes in May, after Schleuss challenged the vote, claiming union resources benefited Lunzer’s campaign and that members weren’t given adequate notice about election proceedings, the release states.

Schleuss said Wednesday he grew up in Harmony Grove near Camden but attended high school in Little Rock. He studied journalism as an undergraduate at the University of Arkansas, Fayetteville, and worked as the Northwest Arkansas Democrat-Gazette's online editor from 2009 to 2011. After working part-time as a reporter and weekend host for public radio station KUAF in Fayetteville, he departed his home state to join the Los Angeles Times.

Schleuss said that, even after leaving Arkansas, his work has been impacted by the place where he grew up.

“There’s this sort of a superpower when you come from a place like Arkansas, where you can walk through an environment and see it with these eyes that people in that environment maybe don’t see it with, a perspective that people don’t have from a large city.” Schleuss said. “I’ve always kind of employed that superpower.”