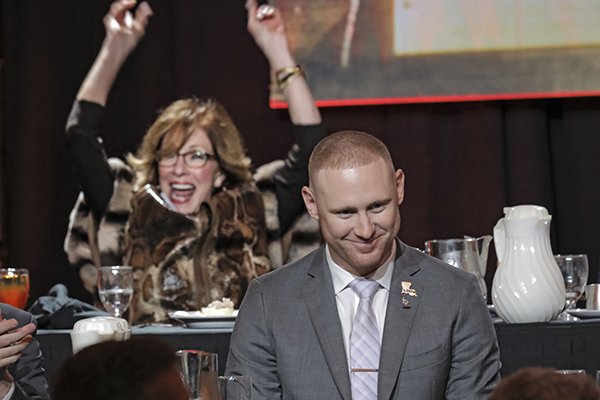 LSU passing game coordinator Joe Brady smiles after winning the 2019 Broyles Award on Tuesday, Dec. 10, 2019, in Little Rock. In the background Carole Smith reacts as his name is announced. Smith hosted Brady and his girlfriend during their state in Little Rock. The Broyles Award is given to the top college assistant coach in the country.

If there was anyone who questioned the impact Joe Brady had on LSU this season, the protests were unequivocally put to rest Tuesday.

Brady, the Tigers' passing game coordinator and wide receivers coach, was chosen as the 2019 winner of the 24th annual Broyles Award during a ceremony at the Marriott Hotel in Little Rock.

Brady at a glance

NOTEWORTHY Initially signed with Air Force after playing at Everglades (Fla.) High School, but he transferred to William & Mary after one year. ... Earned academic all-conference honors twice from 2009-2012 while playing as a wide receiver in 23 games with the Tribe. ... Coached linebackers from 2013-2014 at William & Mary. ... Served as a graduate assistant at Penn State in 2015-2016. ... Joined the New Orleans Saints as an offensive assistant in 2017. ... Became passing game coordinator and wide receivers coach at LSU in 2019.

"This is such an honor, it truly is," said Brady, who was the first Broyles Award finalist ever serving in his first year as an assistant coach. "To think, three years ago I was a G.A. just trying to do the best job I could as a graduate assistant, and then an offensive assistant. I'm just so thankful to be a part of this right now."

It wouldn't be much of a stretch to suggest that LSU is equally happy Brady is a part of its program.

Nicknamed the "Boy Wonder," Brady, 30, was brought in to help integrate a Spread offense that previously wasn't a major part of an LSU system that relied heavily on the running game.

Installing a pass-happy philosophy didn't necessarily mean the Tigers would get away from the run, but it did suggest an uptick in production from quarterback Joe Burrow. Once Brady put the finishing touches on his new scheme, LSU's offense took off in record-breaking fashion.

The top-ranked Tigers, who will take on No. 4 Oklahoma on Dec. 28 at the Peach Bowl in the semifinals of the College Football Playoff, are the first team in the SEC to ever produce a 4,000-yard passer, a 1,000-yard rusher and two 1,000-yard receivers in the same season. LSU also scored 584 points during the regular season, which shattered the school's previous mark of 541. The Tigers also had 57 of their 74 touchdown drives last three minutes or less.

Brady's influence on the offense extended to Burrow, who completed just 57.8% of his passes for 2,894 yards and 16 touchdowns a year ago. This season, the Ohio State transfer and Heisman Trophy front-runner has a 77.9% completion percentage with 4,715 yards passing and 48 touchdowns. No player in SEC history had ever thrown for at least 4,000 yards and 40 scores prior to Burrow.

"It's hard to really wrap your mind around it," Brady said of the Tigers' ascension in his first year. "I try to just attack each day the same, just the same approach. As long as you're not looking for what's next, you'll do a great job where you're at.

Brady spent the previous two years with the New Orleans Saints as a lower-level assistant before joining the Tigers' staff four weeks after their Fiesta Bowl victory over Central Florida in January. Prior to his stint with the Saints, Brady was a graduate assistant at Penn State from 2015-2016 and served as a linebackers coach at his alma mater, William & Mary, in 2013-2014.

"Just to be associated with something with Coach Broyles, everything he stood for and what he brought to this profession ... it humbles me," Brady told a huge audience in the ballroom. "It's so special to me. Coach [Ed] Orgeron took a chance on an assistant to an assistant with the New Orleans Saints. Nobody had ever heard of my name, and I really liked it that way.

"I was able to just learn a lot of football and learn from the best. It means a lot to me, and the passion Coach O has for the state of Louisiana and the culture that he's built. I'm just truly honored to be a part of it."