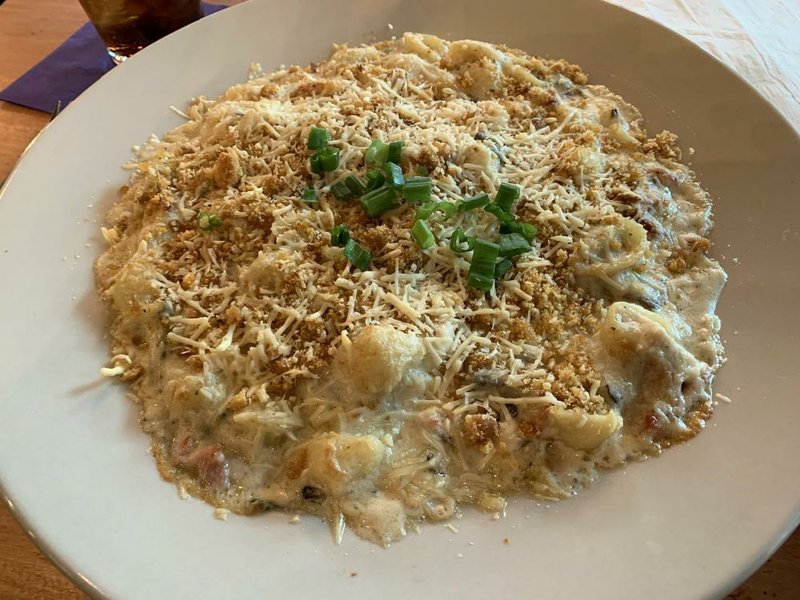 It's been seven months since Don Dugan of Dugan's Pub and his family bought River Market restaurant Dizzy's Gypsy Bistro from founder Darla Huie, who moved the restaurant from its original Benton location in fall 2009.

Dugan promised at the time to keep the basic structure of Dizzy's pretty much the same, including the decor, the staff and the menu (including the restaurant's award-winning cheese dip), though he thought he'd be making some seasonal changes and maybe a few tweaks to the menu.

Mostly, unless you eat there regularly, you would notice few changes indeed.

The dining room decor still features a raucous riot of vibrant, diverse artwork (everything from tributes to Frida Kahlo to the Buddha, including what appears to be Tom Cruise wearing a crown of thorns), with blown-glass and wine-bottle chandeliers. Seating in most of the room is at fairly sedate tables but closer to the windows the tables have brushed-aluminum tops and mismatched chairs. There's seating in the front bar area that's a little less dizzying, and a nice shielded patio. Stylized fish images engraved into the concrete entryway and bar floors remain from the days it was Vermillion Bistro; a John Deering mural that graced Vermillion Bistro's wall apparently still exists behind a Dizzy's wall but is no longer visible.

There has been a change to the physical menu — Dugan has condensed it to two sides of a menu card instead of the oversize, paged thing it used to be. Changes to the menu content have been minor — for example, shells have replaced the original type of noodles in a couple of the pasta dishes. Prices, as before, are high, but portions are correspondingly huge.

Our overall take on Dizzy's has heretofore been that we've always enjoyed our visits, everything tastes fresh, everything is prepared pretty much from scratch and a lot of care has gone into the preparation. We've always had top-notch service there, too. But what showed up on our plates never quite fulfilled what the menu descriptions promised.

That's the biggest change, and maybe it's due to the changes at the top: Everything we had at Dizzy's this time around engendered joy rather than disappointment.

Take, for example, the White Truffle Mac + Cheese, which at $19 seemed steep until we got a look at the monster charger it came in: small pasta shells (replacing the erstwhile macaroni) baked en casserole in a bubbly sauce of bechamel and truffle oil with large chunks of chicken, mushrooms, spinach and sun-dried tomatoes (the menu also says ham but we didn't notice any), topped with a crisp parmesan-crouton crust. Hungry us barely made it halfway through the immense portion, so we took the remainder home, where it made for enjoyable cold next-day leftovers.

Oh, and if that's not enough food, it comes with a modest side salad of field greens with a sort of pico de gallo centerpiece of diced tomatoes, onions and cucumbers; the peppery parmesan, chunky with shredded cheese and tart as well as peppery, turned out to be a wise choice. (Other from-scratch dressing options: ranch, Caesar, bleu cheese, mustard vinaigrette, balsamic vinaigrette and blackberry champagne vinaigrette.

We thought we were getting our portion control more under control when we ordered the Cheeseburger ($11), choosing Swiss over cheddar (for an extra buck you can get it with gouda, bleu, Boursin, feta or brie) on a brioche bun. The burger, too, is huge and comes with ample side fries, crispy outside, soft inside, the way fries ought to be (and lightly garnished with shredded parmesan and some chopped green onions).

The burger comes with all sorts of veggie garnish options, on which we passed, opting only (and on the side) for the garlic basil mayonnaise; we're not normally conducive to putting mayo on red meat, but this actually pleasantly accented the burger (and even served as a surprisingly decent dip for the fries). If a simple burger is insufficient, consider the Gypsy Burger ($13), topped with Dizzy's cheese dip, Petit Jean bacon, pico de gallo, field greens and the garlic basil mayo on a brioche bun.

Service was universally good, and we were well taken care of at all points.