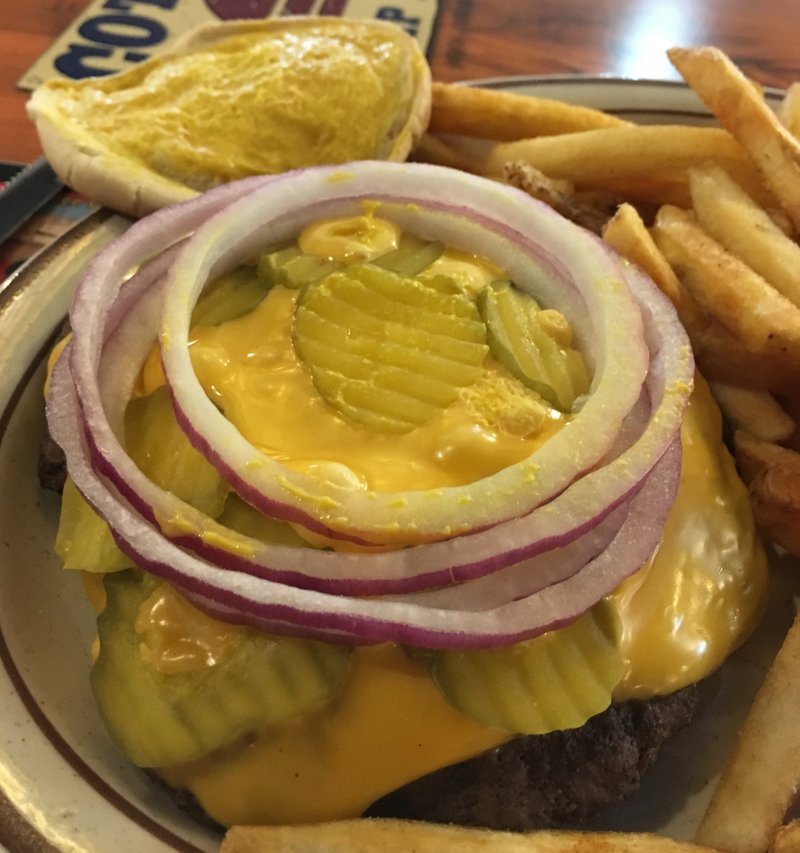 The Hubcap Cheeseburger at Cotham's in the City will have a new "sister" on Cantrell Road. (Democrat-Gazette file photo/Eric E. Harrison)

Last week, chicken-finger fans saw the opening of the area's first Raising Canes on East McCain Boulevard in North Little Rock. Next week — Wednesday, in fact — comes the grand opening of the latest Little Rock outlet of Slim Chickens at 16105 Chenal Parkway, next-door to Mellow Mushroom. For the opening of its 100th store, the Fayetteville-based chain will present, at 10:30 a.m., a $10,000 grand opening donation to Arkansas Children's Hospital President and Chief Executive Officer Marcy Doderer. Hours are 10:30 a.m.-10 p.m. (dine-in) and 10:30 a.m.-midnight (drive-through).The phone number is (501) 379-9553.

The chain had its origins in chief brand officer Greg Smart's garage, where he and high school buddies were drinking, playing with a turkey deep-fryer and experimenting with different sauces. The first Slim Chickens opened in a former Fayetteville sushi restaurant in 2003. The chain has 19 locations in Arkansas (this is the fourth in Little Rock — the others are on West Markham Street near the University of Arkansas for Medical Sciences; at Cantrell Road and Mississippi Street; and in the former Arby's at 301 N. Shackleford Road), and 81 in 14 other states, Kuwait and the United Kingdom.

Erin Griffin, co-owner with husband Jon Griffin of Cotham's in the City, 1401 W. Third St., Little Rock, says she's looking at a mid- to late-January target to open Hubcap Burger Co. in the former Casey's Bar-B-Q/Arkansas Burger Co. building, 7410 Cantrell Road, Little Rock. She says $30,000 in plumbing and sewer work has pushed back her original first-week-of-January estimate. In addition to Cotham's signature hubcap burger, almost everything on the menu will come on a bun, including catfish, chicken tender and grilled chicken sandwiches and a veggie burger. They'll also serve fresh-cut fries — "something we don't do at Cotham's," she says — and "different onion rings than we do downtown," and they're applying for a native beer permit to serve local brews. Tentative hours: 11 a.m.-8 p.m. Tuesday-Thursday, 11 a.m.-9 p.m. Friday-Saturday. A phone number is pending.

Buffalo Brewing Co., which opened its taproom this spring at 5622 R. St., Little Rock, next to Burge's, has shut down. "We've closed the doors," says owner Nolen Buffalo, who posted the notice Dec. 5 on the company's Facebook page, facebook.com/Buffalo-Brewing-Company-Arkansas-953088774718088. Buffalo's operation started out as The Water Buffalo, a home-brewing supplier at 106 S. Rodney Parham Road, Little Rock; he turned it into a brewery, Buffalo Brewing, in 2016. The taproom phone number, (501) 904-1133, has been disconnected.

We reported a couple of weeks ago on a possible pending Pizza Cafe outlet in the Lakehill Shopping Center, 4000 block of John F. Kennedy Boulevard on North Little Rock's Park Hill. We also reported that, unlike the two Little Rock locations — the original at 1517 Rebsamen Park Road and Pizza Cafe West, 14710 Cantrell Road — it would be opening under something similar to a franchise license. However, Pizza Cafe owner Richard Harrison (no relation) has since gotten back to us to say that he was unable to reach a deal with the owners of the new pizzeria on the use of the name. So while it's fairly likely there will be a new pizzeria in that shopping center, it won't be called Pizza Cafe.

Today, 5-9 p.m., Mockingbird Bar & Tacos, 1220 Main St. Little Rock, hosts a tap takeover with PrestonRose, a small-batch artisan brewery and organic farm in Paris (Logan County), in the foothills of Mount Magazine. Five Mockingbird taps will spout PrestonRose beers, including Blue Centennial (an American blue ale), Heritage Pale Ale (made from Heritage hops), Punkelweizen (a hefeweizen made from PrestonRose pumpkins), Roselle (a high gravity Norwegian farmhouse ale) and Dragon Volant (a saison made from wild-gathered trifoliate oranges). The PrestonRose beers will be on special all night ($4-$6), and brewery owners Liz and Mike Preston will be on hand. The restaurant will also serve food specials made from PrestonRose's homegrown fire-roasted hatch chiles. The phone number is (501) 313-5413.

We're working up our list of Central Arkansas restaurants that we know will be open Christmas Day, for publication in our Dec. 19 column (that's next Thursday). Get your information — whether you'll be open, the hours of Christmas operation, a rough idea of any menu specials and prices and a phone number (and website and Facebook page and ...) where members of the public can make reservations and/or obtain more information.

As with our Thanksgiving list, note that inclusion is purely a matter of a restaurant, hotel, lodge, etc., providing information to us and does not in any way constitute an endorsement; where possible, we will include phone numbers for reservations and for customers to double-check any details (because we have verified information as much as possible but are not vouching for absolute accuracy). And the absence of a restaurant from the list does not constitute either proof that it isn't open or any form of disdain on our part.

Here are the two items we already have received:

• And Hurts Donuts, 107 E. Markham St., "never closes," says franchisee Connor Grimes, "so please feel free to include us in any future lists." 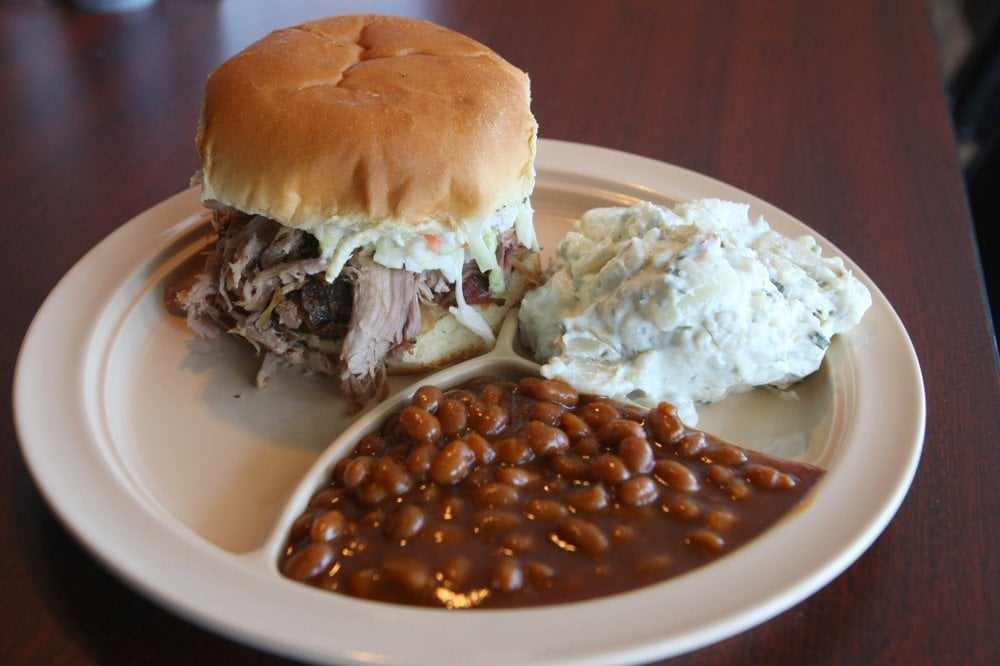 And Arkansas' Whole Hog Cafe is the seventh-best barbecue restaurant in the United States. That's according to the "barbecue" experts Go Shindig ("a one-stop-shop for all BBQ grilling equipment and outdoor picnic supplies") who list it — and in particular the location at 2516 Cantrell Road, Little Rock — on its cross-country "ultimate BBQ road trip" (goshindig.com/united-steaks-of-america-ultimate-bbq-crawl). "An average meal at the joint will set you back $9.47 and it seems customers love it, too, with Tripadvisor data revealing 90% of all reviews are positive," according to a news release.

Following Go Shindig's map, it's the No. 13 stop on a 10-day trip of 15,454.39 miles (through every state except Hawaii!) that starts at the BBQ Shack in Skagway, Alaska, works its way south toward Arizona before heading up the East Coast to Maine, then loops back northwest to the final "pit" stop in Evansville, Wyo. In case you're curious, the rest of the Top 10: 1. Cherries BBQ Pit, Montana; 2. Ridge View BBQ, West Virginia; 3. Mission BBQ, Virginia; 4. Community Q BBQ, Georgia; 5. Matt's BBQ, Oregon; 6. Becky's BBQ, Rhode Island; 8. Lewis Barbecue, South Carolina; 9. Smokin Yard's BBQ, Colorado; and 10. Phat Jack's, Nebraska. The methodology used to calculate the road map: "We ranked the top 5 BBQ restaurants from each state to find the top ranking based on TripAdvisor reviews and the average price of a meal including appetizers and a drink. We then used a route planner, myrouteonline.com, to determine the most efficient driving route in order to visit all of the top restaurants in each state."