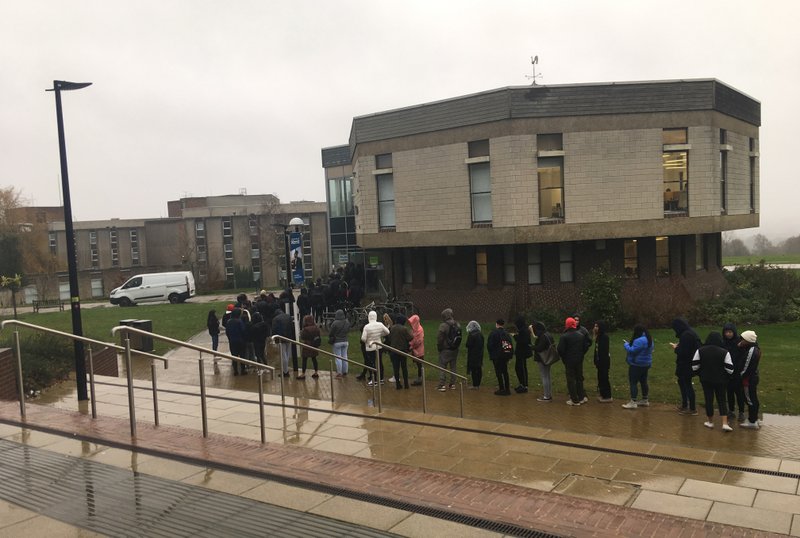 In this photo made available by Jack Dice, people queue up to cast their ballots in the general election, at the University of Kent, in Kent, England, Thursday, Dec. 12, 2019. Britain is holding an early election in wintry December, with a number of strange locations put in use as polling places. Among the places where Britons cast their ballots Tuesday were a car dealership, a laundrette, a Christmas grotto and of course some pubs. There were a few problems, including flooding at one location. (Jack Dice via AP)

LONDON — Britain’s Conservative Party has reached a total of 326 seats in the House of Commons, ensuring it will form a majority government.

Counts by broadcasters BBC, ITV and Sky News say the party has reached the threshold, with results from dozens of seats still to come.

Conservative Prime Minister Boris Johnson has called the election “historic.” He ran on a promise to take Britain out of the European Union by Jan. 31 if he won a majority.

The Conservatives’ “Get Brexit done” message helped them win previously Labour-held seats in parts of the country that voted in 2016 to leave the EU.

LONDON — An exit poll in Britain’s election projected Thursday that Prime Minister Boris Johnson’s Conservative Party likely will win a majority of seats in Parliament, an outcome that would allow Johnson to fulfill his plan to take the U.K. out of the European Union next month.

The survey predicts the Conservatives will get 368 of the 650 House of Commons seats and the Labour Party 191. It projects 55 for the Scottish National Party and 13 for the Liberal Democrats. Based on interviews with voters leaving 144 polling stations across the country, the poll is conducted for a consortium of U.K. broadcasters and regarded as a reliable, though not exact, indicator of the likely result.

Polls have closed across the U.K. and ballots are being counted, with official results expected early Friday. If Conservatives do win a majority of seats, it will vindicate Johnson’s decision to press for Thursday’s early election, which was held nearly two years ahead of schedule.

He said that if the Conservatives won a majority, he would get Parliament to ratify his Brexit divorce deal and take the U.K. out of the EU by the current Jan. 31 deadline. That would fulfill the decision of British voters in 2016 to leave the EU, three and a half years after the divisive referendum result. It would start a new phase of negotiations on future relations between Britain and the 27 remaining EU members.

A Conservative victory would also raise questions over the future of Labour leader Jeremy Corbyn, who will have led his left-of-center party to two electoral defeats since 2017.

The British pound surged on the news, jumping over two cents against the dollar, to $1.3445, the highest in more than a year and a half. Many investors hope a Conservative win would speed up the Brexit process and ease, at least in the short term, some of the uncertainty that has corroded business confidence since the 2016 vote.

The prime minister had pushed for this early election to try to break a logjam in Parliament that stalled approval of his Brexit agreement.

The Conservatives have focused much energy on trying to win in a “red wall” of working-class towns in central and northern England that have elected Labour lawmakers for decades but also voted strongly in 2016 to leave the EU. Polls suggest the plan may be working. The Conservatives also have been helped by the Brexit Party led by Nigel Farage, which decided at the last minute not to contest 317 Conservative-held seats to avoid splitting the pro-Brexit vote.

Labour, which is largely but ambiguously pro-EU, faces competition for anti-Brexit voters from the centrist Liberal Democrats, the Scottish and Welsh nationalist parties, and the Greens.

Labour has tried to focus the campaign on the plight of the National Health Service, a deeply respected institution that has struggled to meet rising demand after nine years of austerity under Conservative-led governments.

One of the campaign's defining images was a photo of a sick 4-year-old boy sleeping on a hospital floor because no beds were available. Johnson's initial failure to even look at the photo put him on the defensive, portraying him as insensitive to the child's plight.

The photo, initially published by the Yorkshire Evening Post, swept across social media like a firestorm in the final days of the campaign.

For many voters, the election offers an unpalatable choice. Both Johnson and Corbyn have personal approval ratings in negative territory, and both have been dogged by questions about their character.

Johnson has been confronted by his past broken promises, lies and offensive statements, from calling the children of single mothers “ignorant, aggressive and illegitimate” to comparing Muslim women who wear face-covering veils to "letter boxes."

Corbyn has been accused of allowing anti-Semitism to spread within the party. The 70-year-old left-winger is portrayed by opponents as an aging Marxist with unsavory past associations with Hamas and the IRA.