FILM REVIEW: Clint Eastwood’s 'Richard Jewell' is not the stuff of heroes 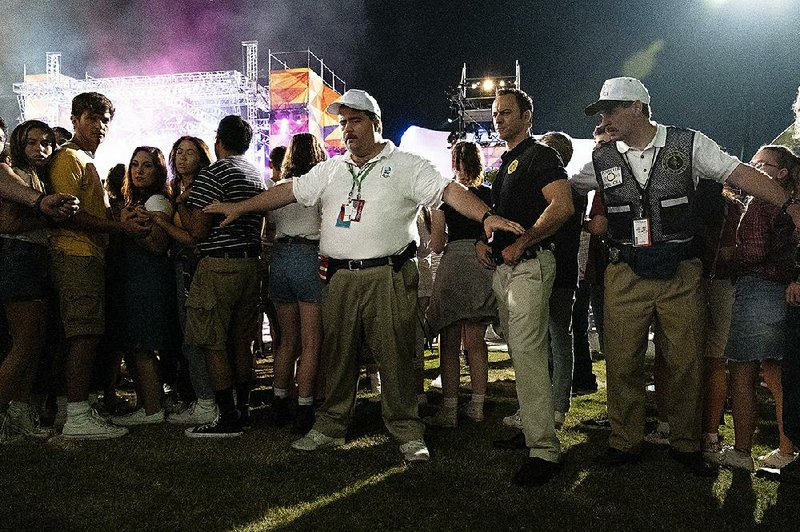 Clint Eastwood turns the story of rent-a-cop Richard Jewell (Paul Walter Hauser, in white shirt), who discovered a pipe bomb minutes before it exploded in Atlanta’s Centennial Park during the 1996 Olympic Games and likely saved dozens of lives, into a political morality play in his latest film.

When I told a well-informed person who reads several newspapers every day that I was writing about Clint Eastwood's new movie Richard Jewell, she allowed that she wasn't much interested in seeing a movie about the security guard who bombed Atlanta's Centennial Park during the 1996 Atlanta Olympics.

It took a beat.

Rating: R, for language including some sexual references, and brief bloody images

Oh, that's right, she realized, Jewell wasn't actually the bomber. We just thought he was for a while.

It's hard to shake off the idea that was planted in our heads in the weeks after that bombing -- Jewell was first presented to us as a hero, then as a pathetic loser who planted a bomb so he could discover it and be seen as a hero.

It was three months later that the FBI finally decided he wasn't their guy and a couple of more years before they identified an anti-abortion, anti-gay American terrorist named Eric Rudolph as the likely bomber. Rudolph was finally arrested in 2003 and confessed to a series of bombings, including the one at Centennial Park.

Jewell was no criminal. He did his job and saved lives. And his life might have been ruined by the focus that the FBI and the news media turned on him. He died in 2007 at 44 years old from complications from diabetes, a disease exacerbated by mental stress. The last 11 years of his life were spent dealing, in one way or another, with the fallout from that night in Centennial Park.

A movie about Richard Jewell could be extraordinarily interesting. We live in a time when a lot of people court fame for fame's sake, who seek to make themselves brands and curate images. Jewell was an ordinary guy with modest aspirations who got sucked into the celebrity machine and chewed up. He could serve as a cautionary tale.

But maybe Clint Eastwood is not the best sort of storyteller to tell a story like Jewell's. Eastwood has his virtues as a filmmaker, but being alert to nuance is not one of them. I do not know anything about the real Richard Jewell that you could not learn from skimming his Wikipedia page, but I know it would have made for a more interesting movie were the character not presented to us as an ingenuous waif, a person so free of guile and so trusting of authority that he becomes complicit in his own defamation.

I do not believe that Eastwood wants to be seen as blaming the victim here, and I have not delved into the various nonfiction accounts of Jewell's ordeal. But would it make for better drama to make the character a bit more complicated and conflicted?

Maybe I'm wrong -- people go to see movies with cardboard characters all the time. Some people want bright lines between their good and evil and like to be pumped up by certainty. So every character in Richard Jewell is either good or evil.

Jewell (Paul Walter Hauser, who played Shawn Eckhardt in the 2017's I, Tonya) is an underemployed wannabe who lives with his supportive mother Bobi (a very good Kathy Bates) and for his dream of one day rejoining the ranks of law enforcement. (He had been a cop but lost his job.) His fault is a certain over-zealous officiousness that borders on bullying, a note that Hauser hits perfectly.

The fact that this Jewell is exactly the sort of person that law enforcement agencies ought to be wary of hiring seems to inform the performances of some of the actors, especially that of Sam Rockwell as Watson Bryant, who the movie posits as Jewell's attorney and one of his few friends.

On the evil side we have pretty much everyone else, but especially FBI agent Tom Shaw (Jon Hamm) and Atlanta Journal-Constitution reporter Kathy Scruggs (Olivia Wilde). Shaw and his confrères conclude that Jewell fits the profile of the "hero bomber" and that he planted the bomb in order to be showered with glory for discovering it and saving lives. He then trades this information to Scruggs for sexual favors.

This is an invention, unsupported by any evidence. Kathy Scruggs was a real person who is now conveniently dead and therefore unable to file the same kind of libel suits against Eastwood, screenwriter Billy Ray and Warner Bros. that Jewell filed against various entities after the FBI cleared him. Her portrayal in the film has angered her former colleagues and caused the Journal-Constitution to demand that the studio issue a "prominent disclaimer" saying they used dramatic license in portraying Scruggs as a prostitute.

But to Eastwood and a lot of people who will eagerly consume this film, extending fairness to Scruggs isn't as important as ginning up the base. That fake news killed Richard Jewell is the message here, a message that will be lapped up by those disposed to receiving newspaper reporters as enemies of the people, concerned only with personal careers and sensational headlines.

This reductive view is hardly helpful. The Richard Jewell affair was a fiasco for the media, an embarrassment to the FBI and a tragedy for Jewell and his mother. Things could have been handled better. But it is the job of a reporter to aggressively pursue the facts, and the facts were that the FBI had identified Jewell as a prime suspect. That they leaked this information is on them.

It was up to Scruggs' editors to decide how to frame her story; they might have decided not to name Jewell as the suspect at all. They might have played the story down. The coverage of the case, by the AJC and other media outlets, is certainly liable for criticism. Other media outlets could have been more cautious.

And people -- you people -- ought to understand that law enforcement agencies and news gathering organizations are not perfect and that everyone is entitled to the presumption of innocence.

We all ought to do better -- including Eastwood, who has squandered the real talents of a gifted cast on a simplistic TV movie. Richard Jewell is a wasted chance, a ham-handed and self-congratulatory bit of agitprop.