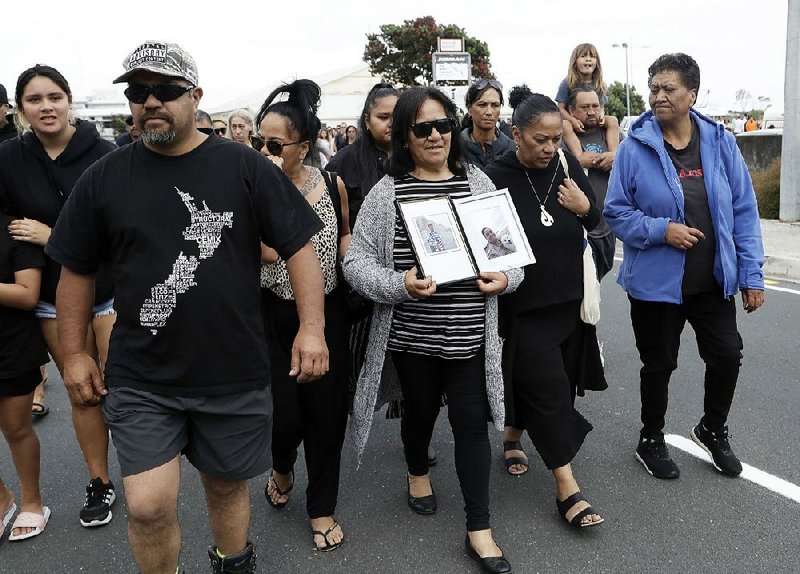 Families of victims of the White Island volcano eruption arrive back at the wharf Thursday after attending a blessing at sea before recovery operations begin off the coast of Whakatane, New Zealand.

WHAKATANE, New Zealand -- A military team in New Zealand this morning recovered the bodies of six people killed in a volcanic eruption Monday on White Island and was searching for two others, undertaking the daring mission even as the threat of another eruption loomed.

As of 11:30 a.m. local time, the six bodies had been airlifted to a patrol vessel moored in the Bay of Plenty, the HMNZS Wellington, and were expected to be flown later to Auckland to be formally identified.

Eight military specialists wearing protective clothing and using breathing apparatuses recovered the bodies, police said. Scientists have warned that gases on the island after Monday's eruption are so toxic and corrosive that a single inhalation could be fatal.

Police Deputy Commissioner Mike Clement told reporters Thursday evening that drones had pinpointed six bodies but the location of two others was unknown. He expected the operation to take several hours.

Scientists have warned volcanic activity has increased in recent days and the island is "highly volatile."

That has delayed the recovery of the last victims since Monday's eruption, which occurred as 47 tourists and their guides were exploring the island. In addition to the bodies left on the island, eight other people were killed and dozens were severely burned by the blast of scalding steam and ash.

MOSCOW -- Russia's only aircraft carrier caught fire Thursday, killing one crew member, injuring another 11 people and significantly damaging the ill-fated ship that has been haunted by incidents throughout its service.

The fire on the Admiral Kuznetsov broke out during welding work at a shipyard in the Arctic port of Murmansk and spread quickly through the carrier's internal compartments. The ship's crew and emergency teams spent the day battling the blaze.

The military said one crew member died while battling the fire, and another one is missing.

Authorities in Murmansk said 11 people were injured and 10 of them were hospitalized in intensive care units.

The Investigative Committee, the nation's top state investigative agency, has opened an inquiry into a possible violation of safety rules.

BAGHDAD -- An angry mob killed a 16-year-old and strung up the corpse by its feet from a traffic pole after the teen shot and killed six people Thursday, including four anti-government protesters, Iraqi officials said.

The violence underscored the growing fears and suspicions swirling around the 8-week-old protest movement, which started in Iraq on Oct. 1 when thousands took to the streets to decry government corruption, poor services and scarcity of jobs.

The exact circumstances of Thursday's bloodshed were not clear, with different versions circulated throughout the day. The violence began when the young gunman opened fire in Baghdad's Wathba Square, killing two shop owners and four protesters. Security officials said the teen was wanted by police on drug charges and was running from security forces at the time.

The killing of the teenager was condemned by the wider protest movement in Tahrir Square, which said in a statement that the perpetrators were not part of their peaceful demonstrations.

TORONTO -- Canada's opposition Conservative Party leader said Thursday that he will resign as party leader after weeks of infighting and a disappointing performance in parliamentary elections.

Andrew Scheer, 40, called resigning "one of the most difficult decisions I have ever made." He will stay on until a new leader is elected.

"Serving as the leader of the party that I love so much has been the opportunity and the challenge of a lifetime," Scheer said on the floor of Parliament.

Prime Minister Justin Trudeau won a second term in Canada's October elections despite losing the majority in Parliament. It was an unexpectedly strong result for Trudeau after a series of scandals.

The vote led several Conservative Party officials to call for Scheer to step aside.

Scheer plans to stay on as the member of Parliament for the Saskatchewan district that he has represented since he was first elected in 2004 when he was 25. 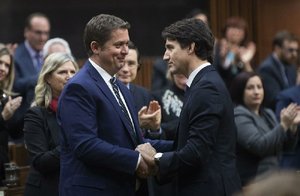 Photo by AP/The Canadian Press/Adrian Wyld
Prime Minister Justin Trudeau (right) shakes hands Thursday with Andrew Scheer in the House of Commons in Ottawa after Scheer announced that he will step down as leader of the Conservatives.