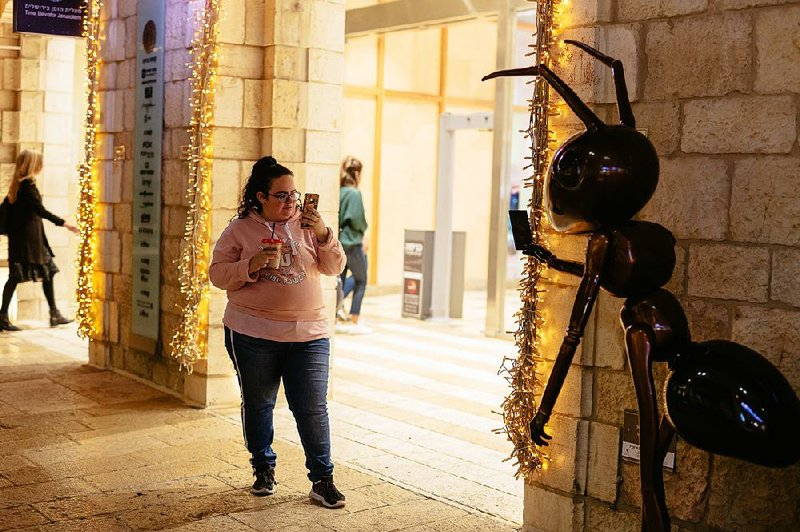 Ruth Borovski snaps a photo using her smartphone, a device she had never heard of when she lived in one of Israel’s ultra-Orthodox Jewish sects. She fled the sect and an unhappy arranged marriage.

JERUSALEM -- Ruth Borovski, doing a bit of homework, sat in a library and Googled "phosphate" on her smartphone.

That could not have happened 19 months earlier when Borovski was a 27-year-old living within one of Israel's cloistered ultra-Orthodox Jewish sects. Then, she had never heard of phosphate. Or of smartphones.

She says she had never seen a library. Now, it's hard to get her out of one.

"Every day, I learn something new, every minute even," she marveled amid the stacks, where knowledge is unfolding for her at a dizzying, sometimes terrifying, pace.

Borovski's race into the wider world started in 2018 when, trapped in an arranged marriage, she dialed the hotline of a Jerusalem-based nonprofit called Hillel and said she wanted to leave her family and her community. With Hillel's help, she became one of a growing number of Yotzim, or "Leavers," who have bolted from closed religious communities into a secular world they are ill-equipped to navigate.

Borovski said she left behind the ultra-Orthodox, known in Israel as the Haredim, never having opened a bank account, ridden a bus, applied for a job or talked to a stranger.

She has done all of those things now, in what she describes as a sprint to make up for the decades she spent in a cultural cocoon, never wandering more than 500 yards from the house where, she said, she and her 12 brothers and sisters learned nothing of science, math or any history outside of religious texts. Borovski -- who belonged to the Satmar Hasidic group, known for its especially strict religious adherence -- said she wasn't just denied television, radio and the internet but was unaware of their existence.

"I'm trying to catch everything now," she said during a break from a lesson on cell structure, part of a remedial studies program offered by Hebrew University of Jerusalem to students who missed out on basic schooling. "I don't think I have enough time."

Her classes, along with her new apartment and job in a hospital nursery, were arranged with help from Hillel. The group acts as a landing pad for those making the leap, offering the Yotzim everything from a place to sleep to handheld tours through the cacophony of a shopping mall.

Hillel has been around for more than 25 years as a small volunteer group that would affix stickers with its hotline number on light posts in Haredi neighborhoods -- only to have the locals quickly peel them off. (The group is separate from the Jewish student organization of the same name on many college campuses.)

Ultra-Orthodox communities often provide their members with a sense of meaning, certainty, beauty and belonging that can prove elusive for those in the secular world. But more people than ever are asking Hillel for help in entering that world, 1,700 so far this year, with the number growing about 20% a year. A recent Tel Aviv University study suggested that 6% of Haredi adults leave their family's religious communities.

To keep up, Hillel has expanded from seven employees in 2015 to 32 today. It is about to open its fourth branch in the country and maintains an emergency shelter in Jerusalem.

The group operates on an annual budget of about $10.5 million, much of it raised from American donors, for scholarships, counseling, housing and job placement. Among its clients for legal aid: more than 120 women who have been cut off from their children by religious courts that view their leaving the Haredim as a moral collapse that renders them unfit to be parents.

On a recent weeknight, the Hillel headquarters near a McDonald's in central Jerusalem was abuzz with volunteers and clients, sorting donated clothing and going over homework.

In one of its offices, a man sat hunched over the hotline phone Borovski had once called, talking to someone else thinking of upending his or her known universe.

"Sometimes they are just beginning to contemplate the idea; sometimes they are already sleeping on the streets," said Dani Shomron, a Hillel volunteer. He was recently on the line with a man in his early 20s who had been booted from his house when his brother discovered his hidden smartphone.

Many of the Haredim -- who represent more than 10% of Israel's population -- wall themselves off in their neighborhoods, excused from military service and spending their days in schools, or yeshivas, that often forgo typical basic education in favor of religious studies.

Ultra-Orthodox parties have been a key part of Prime Minister Benjamin Netanyahu's governing coalition, and a backlash against Haredi influence is one cause of Israel's protracted political stalemate. (Some sects, however, do not participate in politics at all. The Satmar, for instance, reject Zionism and the Israeli government.)

LEAVING A LIFE BEHIND

Borovski is almost entirely cut off from her former life. When she was a child, she and her eight sisters kept house with their mother while her father studied Torah for 12 hours a day at the yeshiva. Her four brothers followed him as they came of age.

When she was 23, the rabbi called, and she soon found herself sitting silently next to an awkward young man while their parents talked. After a half-hour, they parted. Two months later, she saw him again at their wedding.

She didn't. Borovski didn't want to talk about the four years of marriage. Only that it was miserable and that the community allowed her no way out of it. She had not been pining to shed the only life she had known, but suddenly she felt trapped in it.

"I didn't want to leave, but there was no place for me," she said. A sympathetic friend slipped her Hillel's number, and two days later, she was at the office in Jerusalem.

Everything was strange. The first time she saw Jaffa Street, a major shopping thoroughfare bisected by a sleek French-built tram, was almost overwhelming. She was bewildered by the sight of a soccer game played on a television, neither of which she had seen before.

"It was like being on a different planet," she said.

Slowly, confusion has eased into comfort. She's no longer tempted to stay in touch with her parents, who had pressed her to apologize and return to her husband. "I'm happy with my life. I don't think about them much," she said.

After speaking only Yiddish, the historic language of European Jews, she is mastering Hebrew and English. She spends almost as much time studying as her father did, including two or three hours in the library, where she pulls random books from the shelves. She filled two pages with notes from a high school biography of Walt Disney after seeing Frozen, her first animated movie.

"She doesn't know the basics, but she works hard," said Dvorah Dminisky, the teacher who had just graded the exam on cell structure that Borovski passed with a 90%.

Borovski, who works 40 hours at the hospital nursery, is planning to use a Hillel scholarship to study nursing.

Eventually, she wants to work at a hospital in Boston, a goal imparted by one of her instructors who had lived in that city. Borovski had never heard of Boston.

But that's OK. Another new thing she has discovered is that the future will have very little to do with her past.