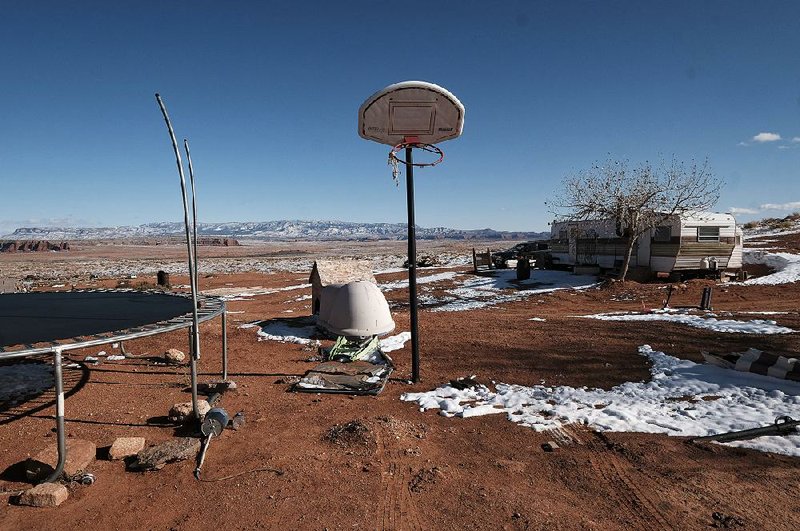 Sparse snow dots the landscape around Legena Wagner’s home in the Sweetwater Chapter of the Navajo Nation in northeast Arizona. Water has long been held sacred in the Navajo Nation, the country’s largest reservation, but a third of its 300,000 residents lack tap water or flushing toilets.

SWEETWATER, Navajo Nation -- On a good day, when the breeze is up and Apache County's rutted red-clay roads are passable, Legena Wagner's family drives 45 minutes to fill water containers at a windmill pump. In the days that follow, Wagner dispenses their contents sparingly: half a cup for her 5-year-old to brush his teeth; a couple of pints, well heated, to wash dishes in the decorative enamel bowl on her kitchen table; and about 10 gallons, measured out to last a week, for bathing.

"Running water, it would be such a luxury," Wagner said, pausing to describe how different her life would be if she didn't have to trek outside, past the empty plastic buckets and the rootling pigs, to the outhouse with its majestic views across northeast Arizona's snow-skimmed plateaus.

Wagner is one of more than 2 million Americans who do not have running water and sanitation, according to "Closing the Water Access Gap in the United States." The report, released by two national nonprofit organizations last month, outlines stark, race-based inequalities: American Indian households are 19 times more likely than white households to lack indoor plumbing; blacks and Hispanics are twice as likely.

The disparities also reflect an urban-rural divide. While the lead-contamination crisis in Flint, Mich., highlighted the perils of aging infrastructure in the nation's cities, rural communities face special challenges, often lacking the economies of scale to upgrade systems and the expertise to operate them. The situation is so dire in parts of rural America that experts liken it to the developing world.

"The cultures are different, but the experiences are similar," said Brett Gleitsmann, a water supply and sanitation engineer with the Rural Community Assistance Corp. who worked on projects in Africa and south Asia before heading to American Indian lands. "Always people are hauling water -- from a well, from a relative who has water or a public water station."

The United States does not have a comprehensive means of tracking the number of people living without piped water, according to George McGraw, founder and CEO of the nonprofit DigDeep.

Harder still to calculate is how many people cannot afford water even if they can access it, said Radhika Fox, CEO of the U.S. Water Alliance, a policy-focused nonprofit group that partnered with DigDeep to produce the report.

"That number is much larger than 2 million," she said.

The report was produced by collating federal data sets, including 2014 data collected by the U.S. Census Bureau's annual American Community Survey, which asks a small representative sample of residents whether they have running water. DigDeep and the U.S. Water Alliance identified six communities with poor access to running water and wastewater services, including the Navajo Nation, and spent more than a year assessing how residents' lives are affected.

In the Navajo Nation, the country's largest Indian reservation, where water has long been held sacred, about one-third of the population of more than 300,000 does not have a tap or flushing toilet.

"Water is life," the Navajo say.

In Sweetwater, 15 miles south of Interstate 160 on largely dirt roads, the spring water was known for its bracing mineral taste.

"People couldn't get enough of it," Wagner said. But the springs no longer flow, one of several changes that residents of the drought-prone region attribute to climate change and environmental degradation.

The seeps that used to ooze up before daybreak to refresh grazing sheep and goats have disappeared. Rains that once sustained apricots, corn and squash have been replaced by occasional downpours that race through the empty creek beds. And the winter snows no longer cloak the high desert with the thick, moist blankets Wagner's grandfather recalls.

Those who drive miles to windmills, often carrying matches and wood to light fires below the wells' frozen spigots, may draw water that is not safe. Many water sources across the Navajo Nation are marked with signs warning of contamination, some with naturally occurring toxins such as arsenic, some with uranium and other byproducts of the mining industry.

"A lot of people still drink from those wells," said Jordan Begaye, who had a summer job painting "For livestock use only" on them in red. That's despite extensive public education efforts, according to Yolanda Barney, environmental program manager for the Navajo Nation's Public Water System Supervision Program.

Wagner wonders whether the rare autoimmune disease she suffers from, adult-onset Stills disease, could have been caused by the water, and she now supplements her supplies with bottled water from a grocery store an hour away.

Efforts to get clean water to remote households have been marked by ambitious aims and setbacks.

Federal funding for water infrastructure has dropped to about one-seventh of what it was in the 1970s after the passage of the Clean Water and Safe Drinking Water acts, which set up partnerships, with the federal government setting national standards for water quality that the states were responsible for implementing. These days, the funding that is available is largely loan-based, requiring repayments that can be crippling for small communities.

The American Water Works Association estimates that maintaining and expanding the country's water systems will cost $1 trillion over the next 25 years. The Indian Health Service has put a price tag of $200 million for providing water and sanitation in the Navajo Nation.

In a rare bipartisan move, the House and Senate recently introduced legislation to establish pilot programs designed to assist low-income residents in paying for water and sewage in much the way they can receive assistance for food and heating oil.

"It's a very new concept," said Nathan Gardner-Andrews, chief advocacy officer for the National Association of Clean Water Agencies, who warned, "It is going to take a while."

That's because political wrangling is only the first step in a process that people in tribal lands describe as frustratingly slow.

People have their hopes raised by big projects, said Cindy Howe, a longtime community leader who now works as a field operations manager for DigDeep.

A giant blue pipe lies in sections alongside Route 491, part of a multimillion-dollar project to take water from the San Juan River 280 miles south across the Navajo Nation to communities including Gallup, one of the biggest population centers, where groundwater levels have dropped about 200 feet in the past decade.

The project is designed to meet the needs of approximately 250,000 people by the year 2040, according to the U.S. Bureau of Reclamation. But many rural residents doubt it will help them, noting that it can be prohibitively expensive to take water a few hundred yards from a major pipeline through rocky terrain to an individual home. In the most remote areas, Gleitsmann said, "you might have to run a waterline 8 miles to two houses."

Those problems are compounded by jurisdictional challenges.

In Teec Nos Pos, at one of the few remaining trading posts, owner John McCulloch described how one elderly woman refused for years to allow water pipes to cross her land. And farther south, in an area known as the Checkerboard, where tribal lands abut privately owned tracts, and federal and state properties, the differing forms of ownership impede the installation of all kinds of infrastructure, including water pipes and roads.

On a frigid late-November morning, residents began trickling in from isolated homes in the Checkerboard to fill 55-gallon barrels with ice-cold water at St. Bonaventure Indian Mission and School in Thoreau, N.M.

Across the parking lot, DigDeep has an office, stocked with supplies to provide households with a 1,200-gallon tank, a pump, a water heater and a single sink, deep enough to wash a baby. The nonprofit group installs about three of these systems each week, some powered by solar panels in traditional one-room hogans, others in kitchens that seem to be equipped with everything but a functioning faucet.

The nonprofit organization refills the tanks every month, providing about 40 gallons of water a day, less than 15% of the quantity used by the average American household.

Henry King, who lives 5 miles from the nearest asphalt road on land punctuated by pinyon pines and sagebrush, has been hauling water all his life, these days choosing among three public sources, each about 30 miles away.

He never believed the Clean Water Act would do much to benefit people like him, and doesn't hold out much hope for future help from the federal government. The past, he said, is littered with betrayals and broken promises.

"Like water going downhill, it thins out, dries out before it gets to us," he said.

So when King learned from a neighbor about DigDeep, he was eager to help get a system into his sister's house.

He oversaw the installation, reminiscing about trips by horse-drawn wagon with his parents to collect water from a canyon, until -- whoosh! -- water sputtered from the brand-new faucet in a small room next to the kitchen.

Forty gallons of clean, warm water a day is a luxury Wagner dreams of.

But she also worries about water's growing scarcity and is wary of the way some people misuse it. Of how, when they move away to cities, they grow careless with a life-giving resource that her ancestors revered.

"We must not waste it," Wagner said. 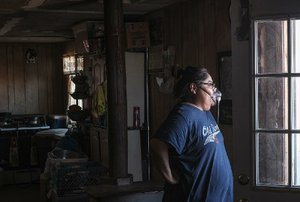 Photo by The Washington Post/ Bonnie Jo Mount
“Running water, it would be such a luxury,” Legena Wagner said. She wonders if the rare autoimmune disease she has developed could have been caused by impure water.