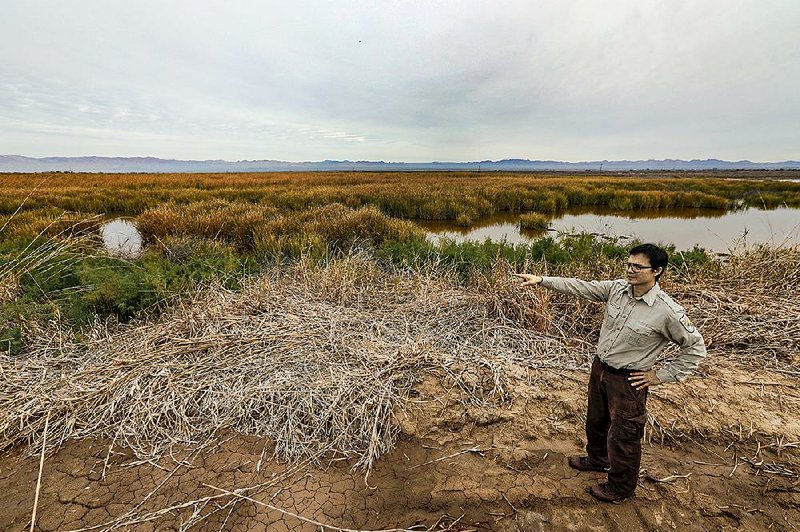 Tom Anderson, U.S. Fish and Wildlife Service biologist, surveys acres of exposed lake bed on California’s Salton Sea. The water level has dropped 7 feet over the past 15 years at the Salton Sea.

LOS ANGELES -- It came as a bittersweet surprise to biologists and government agencies monitoring the steadily shrinking Salton Sea's slide toward death by choking dust storms and salt.

Thousands of acres of exposed lake bed have become, of all things, the unintended beneficiaries of lush marshlands that are homes for endangered birds and fish at the outlets of agricultural and urban runoff that used to flow directly into the Salton Sea.

These unmanaged flows, scientists say, are flushing salinity out of the soil and forming freshwater ponds on the lake's margins, which are attracting cattails and grasses. They, in turn, are attracting insects, which are enticing federally endangered desert pupfish and birds such as the Yuma Ridgway's rail.

"Beautiful, isn't it?" Tom Anderson, a biologist with the U.S. Fish and Wildlife Service, said on a recent weekday, admiring an area of cattails at the southern end of the lake filled with the chattering sounds of endangered rails creeping through the dense vegetation. "Not exactly the gloom-and-doom apocalypse some people have been predicting for this place, is it?"

This is not a simple tale of nature's joyful bounty, however. So unexpected were the wetlands that they may stand as major obstacles to the construction of long-delayed projects designed to restore saltwater fisheries and control clouds of dust rolling off expanses of exposed lake bed.

The projects include building a series of ponds and water-transfer systems across about 29,000 acres at a cost of about $383 million, officials said. Some of that acreage is suddenly home to wetlands and their endangered inhabitants, which would need to be protected during the course of any development. That could lead to further delays in the restoration projects at a time when air quality and environmental conditions in the area are worsening.

"The state team is coordinating with various partners to survey and inventory these locations," Arturo Delgado, assistant secretary for Salton Sea policy at the California Natural Resources Agency, said of the wetlands. "We are evaluating the ability to capitalize on these naturally establishing wetland areas and include them as appropriate in the Salton Sea Management Program."

The water level has dropped 7 feet over the past 15 years at the Salton Sea, a non-draining body of water -- which is what makes it a sea and not a lake -- with no ability to cleanse itself. Trapped in its waters are salt and nutrient-laden agricultural runoff from surrounding farms, as well as metals and bacterial pollution that flow in from Mexico's New River.

"My recommendation is that folks start managing the flows of runoff and leave a lot of these wetlands alone," Anderson said. "They're doing a fine job of suppressing dust and producing entirely new thriving ecosystems at no cost to taxpayers."

Christopher Schoneman is the project leader for the Sonny Bono Salton Sea National Wildlife Refuge at the southern tip of California's largest and most troubled body of water.

"When it comes to habitat and endangered species, the wetlands are a good thing," he said. "But they may complicate things considerably."

Expanding wetlands could affect the first two pieces of a 10-year restoration plan scheduled for completion -- both near where the heavily polluted New River flows into the southern end of the lake.

At one of them, the Imperial Irrigation District is using tractors and plows to turn 120 acres of exposed lake bed into furrows designed to bottle up dust for years.

However, that project, expected to begin later this month, suffered a setback after recent heavy rains caused adjacent drains and streams to jump their banks, filling some of the dust-busting furrows with water and endangered pupfish in need of rescue.

The other project is a $180 million Species Conservation Habitat, which will be largely funded by state bonds, on former lake bed and shallows that have become cloaked in cattails.

"We'd like to preserve and manage as much of the new wetlands as possible," said Jessica Humes, a biologist and environmental project manager for the Imperial Irrigation District. "But a concern is that no one is managing them right now or analyzing their selenium content."

In the meantime, marshlands continue to spread across the Salton Sea's receding shoreline as freshwater pools in depressions in the exposed lake bed, creating lush new ecosystems.

For many, the creation of the Salton Sea more than 100 years ago appeared to be a bad omen. In 1905, engineers were cutting a canal to feed the Imperial Valley when the gates holding back the Colorado River failed. For two years the canal roared unimpeded into a basin near Brawley known as the Salton Sink.

It grew into a 360-square-mile lake straddling Imperial and Riverside counties, about 150 miles south of Los Angeles.

Fishermen flocked to its shores to catch corvina, croaker and sargo. Birds flocked to its wetlands, turning it into one of the most important stops along the Pacific Flyway, supporting 90% of the migration's white pelicans.

But the place never attracted enough big-spending tourists. Abandoned resorts now rotting on the sea's shoreline attest to that failure.

In 2003, scientists predicted that the sea would undergo death by salt when the state Legislature promised to slow the shrinking of the lake as part of a successful effort to persuade the Imperial Irrigation District to sell some of its water to San Diego. Under the agreement, the water district stopped sending fresh water to the sea on Dec. 31, 2017.

Rising salinity levels at the Salton Sea have been linked to die-offs of perch-like fish called tilapia, which huge populations of migrating birds -- including cormorants and brown pelicans -- depend on.

California officials have faced harsh criticism from environmentalists, community activists and Riverside and Imperial county authorities because restoration projects that were promised have proceeded at an alarmingly slow pace.

But patience is wearing thin in a region where critics say dust containing heavy metals, agricultural chemicals and powdery-fine particulates linked to asthma, respiratory diseases and cancer rises from the newly exposed playa.

In October, the Imperial County Board of Supervisors declared an emergency over deteriorating air quality at the Salton Sea.

A month later, the county sent a letter to Gov. Gavin Newsom seeking funding and resources for earthmovers, air monitoring stations, soil and water testing and an epidemiological study of the prevalence of asthma and other ailments among children in the region.

In a prepared statement, the governor's office said this month, "This is an important issue, and the administration is currently reviewing the request from Imperial County. Significant work is underway to address the concerns in the county's letter."

Since 2003, there has been $653 million in federal, state and local funds authorized for Salton Sea mitigation and restoration projects. But only $184 million of that has been spent, according to the California Resources Agency.

The shoreline will have receded 4 miles within 25 years if nothing is done, officials say. No one can say how far the suddenly abundant marshlands will extend, if at all, during that period.

In the meantime, productive and biologically complex ecosystems are occupying zones of harsh desert heat, choking dust storms and extremely high salt levels along edges of the Salton Sea where no one thought they could flourish.