Press forward: Arkansas publisher gives a voice to LGBTQ authors who might not have been published otherwise 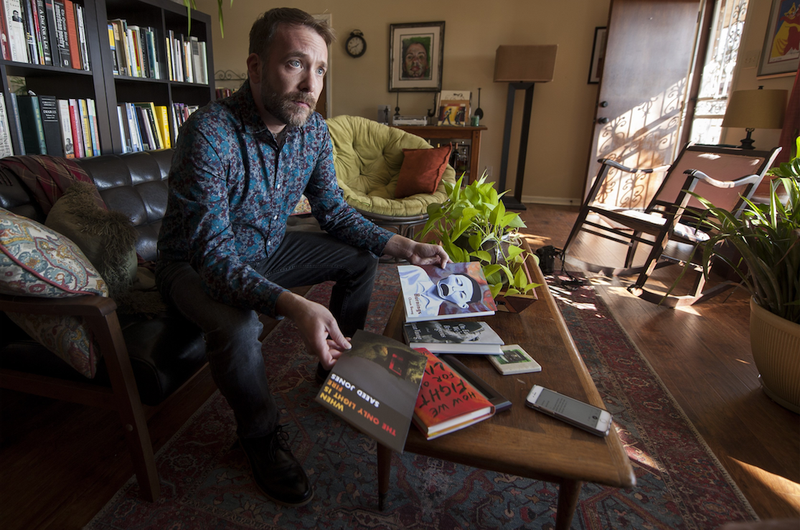 On Dec. 10, 2009, Bryan Borland deposited $1,000 into his bank account. The money had been given to him by his father, Jimmy, and was to be used to publish Bryan's first book of poetry, My Life as Adam.

Nine days later, as he was on his way to buy groceries, Bryan got a call. His father had died after the black Ford Explorer he was driving went off a one-lane bridge and plunged into a lake between Pickens and Dumas.

The deposit slip for that $1,000 loan is in a humble frame in the North Little Rock home Borland shares with his husband, Seth Pennington. My Life as Adam, Borland's poems on family, the death of his brother, growing up Southern Baptist in Arkansas, sexual identity and self-acceptance, was released on March 1, 2010. It was the beginning of Sibling Rivalry Press, the independent publisher Borland founded that would give voice to lesbian, gay, bisexual, transgender and queer authors. 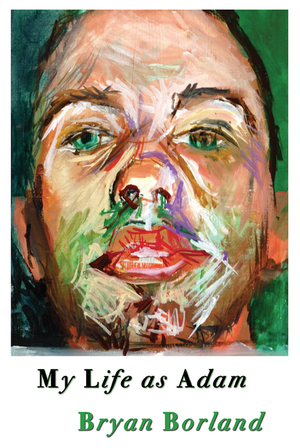 In the near-decade since, Sibling Rivalry has published dozens of books of poetry, anthologies, fiction and nonfiction. The second book it published was 2010's Burnings, the debut chapbook of poetry by Ocean Vuong, the Vietnamese-American whose novel On Earth We're Briefly Gorgeous was one of the most heralded books from this year. (A recent Amazon.com seller was asking $999.99 for a copy of Burnings, which is out of print).

Saeed Jones, author of How We Fight for Our Lives, his 2019 Kirkus-Award-winning memoir about coming of age as a gay, black man in the South, made his debut in 2011 with the poetry collection When the Only Light Is Fire, published by Sibling Rivalry.

And Kaveh Akbar, whose poems (along with Vuong's) were featured in the Maggie Gyllenhaall movie The Kindergarten Teacher, also has a Sibling Rivalry title, 2017's Portrait of the Alcoholic.

The prolific imprint's most recent books include Have You Seen This Man? The Castro Poems of Karl Tierney, which is part of its Arkansas Queer Poet Series; Carl Phillips' chapbook Star Map with Action Figures and Odd Boy by Martin Jude Farawell.

It's a clear, bright Friday afternoon in early November and the 40-year-old Borland sits on a couch in front of a pair of well-stocked bookshelves in his living room. He and Pennington have lived in this house with their two dogs, Rooster and Remy, since August, having bought it after Borland began thinking while on a bike ride that they needed more space. The couple found this property, located on a ridge with a view to the south from the large living room window, the next day.

Borland grew up in Monticello, the youngest by a fair margin of Jim and Becky Borland's three children. His sister, Elizabeth, is 13 years older. His brother, Glenn, was seven years older. Glenn died 27 years ago today when Bryan was 13 from complications following a car wreck.

"When you lose a sibling, or a family member disappears, the whole dynamic of the family changes," he says. "There was some recalibration in our family."

Borland took up writing as a way to get attention.

"My brother was gone, but he existed in kind of a ghost form. I felt like a ghost, too, but I could write. When I wrote, teachers gave me praise and my parents paid attention. It was a way to focus on something else besides the grief that lay like a blanket across our whole house."

The poems of Maya Angelou and beat poet Allen Ginsberg were an early influence, as was the music of Prince (Sign O' the Times sits on his turntable).

In his early teens, Borland began to realize he was gay, though it would be a while before he came out.

He attended Hendrix College in Conway where he met other gay people but was still uncomfortable with his identity.

"There was this atmosphere of rainbow flags and pride, but I wasn't ready for that yet," he says. "It wasn't me."

He earned a degree in psychology and finally came out after graduation. After some initial difficulty, his parents supported him, he says.

"They ended up being absolutely wonderful."

By his late 20s, he was living in Little Rock and sharing his poetry on a blog.

He sent his poems to publishers but didn't get much in the way of response. A friend, the late John Stahle, a New York poet who had published some of Borland's poems in the journal Ganymede, urged him to self-publish.

"If you publish yourself, you get to control the cover art, how it looks, the marketing, the royalties, everything," says Borland, who works for Little Rock law firm Williams & Anderson PLC.

Still, self-publishing was a blow to his ego. He craved recognition from a major publisher.

"I wanted that big poetry money," he says, smiling. "Of course, I know that doesn't exist."

But he also wanted to collect his poems — the ones that would make up My Life as Adam — in a book before he outgrew them. So he approached his father for that $1,000.

The writing Sibling Rivalry publishes isn't daisies and pretty rhymes. Borland is like Sal Paradise in On the Road, yearning for the mad ones who never say common things, blowing up like fireworks across the stars and all.

He has taken a quote from the late poet Adrienne Rich as a sort of code by which Sibling Rivalry abides.

"There's a lot of what I would call comfortable poetry around," Rich told The Boston Phoenix in 1999. "But then there is all this other stuff going on — which is wilder, which is bristling; it's juicier, it's everything that you would want. And it's not comfortable. That's the kind of poetry that interests me — a field of energy. It's intellectual and moral and political and sexual and sensual — all of that fermenting together. It can speak to people who have themselves felt like monsters and say: you are not alone, this is not monstrous. It can disturb and enrapture."

"That's the tagline of the press — Disturb and Enrapture," Borland says. To that end, he publishes writers of all backgrounds and ages with a focus on, but not limited to, LGBTQ authors.

"Nobody else was doing it, certainly not in the middle of the country," he says. "Nobody was publishing people of color or people who were from a spoken-word or slam poetry background. We wanted to shine a spotlight on writers that were not getting attention."

Phillips, author of Star Map with Action Figures, is Professor of English at Washington University in St. Louis.

"Sibling Rivalry champions not only male voices but female voices, nonbinary voices. They recently did an anthology of trans voices [Subject to Change: Trans Poetry & Conversation]. They publish people of different ethnicities ... these are little differences that we don't always think of." 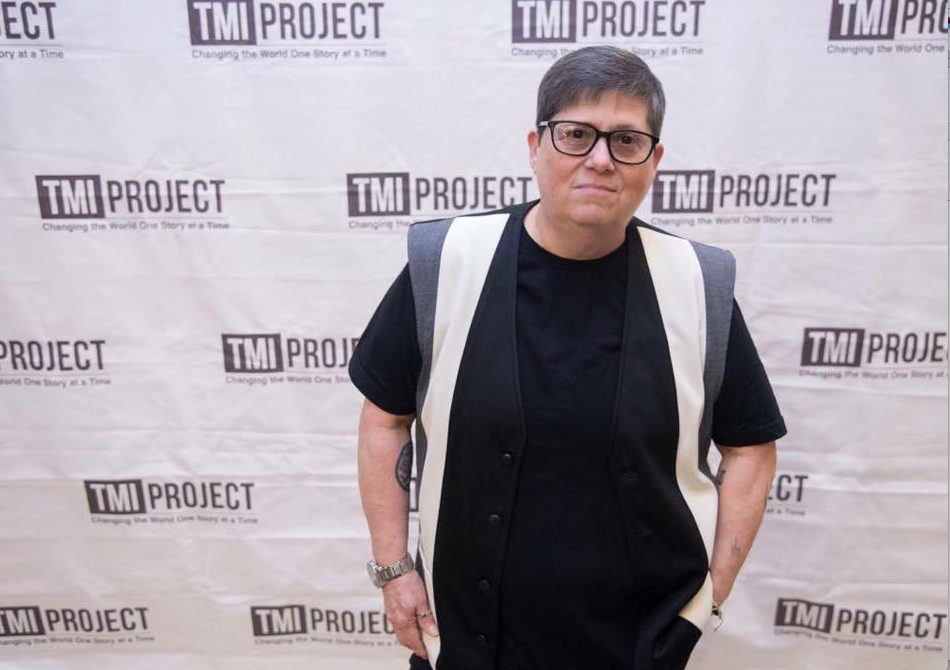 Randi M. Romo is a Little Rock poet whose first book, Othered, was published in 2018 by Sibling Rivalry as the debut title of its Arkansas Queer Poetry Series. She met Borland at the Arkansas Times event Pub or Perish, and he expressed interest in publishing her work.

"I was like, 'OK, right,'" says Romo, a 63-year-old Mexican-American LGBTQ activist and dialysis technician whose formal education ended in the sixth grade. "I had no idea how to make a manuscript. I've been self-educated all my life. I worked a lot on my writing, but I didn't really think of it in terms of publishing."

With Borland's encouragement, she gathered her material and submitted it.

"It was a hot mess," she says. "I had no idea it would go anywhere from there."

The book was selected by the American Library Association as a top-five book in poetry/fiction for 2018 and a top 10 book in its annual Over the Rainbow list of Recommended LGBTQ Reading.

"I'm glad he was so persistent," she says. "He saw something in me I have yet to take ownership of."

For works like hers to come from a small North Little Rock publisher, Romo says, is vital. "They are the only publishing house in the South that is LGBTQ-centric, that is giving a voice to people that in so many ways are marginalized. Their work is such a value for what they do to share our experiences and voices."

She mentions Borland's work with the nonprofit Sibling Rivalry Foundation — which is separate from the for-profit press. The foundation's Undocupoets project offers two annual $500 fellowships, sponsored by Amazon Literary Partnership, to promote the work of undocumented poets.

"I love the way they found some small way to offer support and allow undocumented voices to be a part of the family," Romo says.

Phillips, who has written 14 books of poetry and two collections of essays, has won the Los Angeles Times Book Prize and was a finalist for the National Book Award. He has been published by heavyweights like Farrar, Straus and Giroux, yet he chose Sibling Rivalry for Star Map with Action Figures.

"They're great," he says. "They are super-devoted to the cause and seem to be spreading the word. There is something grassroots about chapbooks and independent publishers. In some ways, they put more effort into publicizing and promoting their authors. I love how [Star Maps ...] looks and how easy it was to work with them."

What would it have been like for Phillips, a 60-year-old gay man, to have come across a Sibling Rivalry title, maybe Luther Hughes' Touched, or War Poet by Rob Jacques, when he was younger?

"There were no models available to me for queerness at all," he says. "I guess I didn't even know there were queer voices out there. When I started writing, I didn't have any models. It seemed frightening and disorienting to write about my own experience. Sibling Rivalry would have opened all kinds of worlds to me." 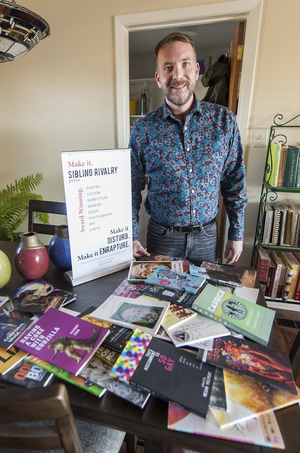 Bryan Borland with just a few of the titles from his Sibling Rivalry Press. The LGBTQ-centric publisher started in 2010 with the publication of Borland's My Life as Adam. (Arkansas Democrat-Gazette/Jeff Gammons)

In 2015, the Library of Congress acquired all of Sibling Rivalry's titles, past and future, for inclusion in its Rare Books and Special Collections Division. Along with Borland and Pennington, who designs many of the press' covers, the press has a staff of six volunteer associate editors. It is also a sponsored project of Fractured Atlas, a New York-based nonprofit arts service organization.

Next year, the press has a typically full slate of titles it plans to publish, including several chapbooks, five full-length volumes of poetry and a collection of essays. The 2020 lineup also includes a diary of Tim Dlugos, whose poetry chronicled firsthand the AIDS pandemic.

Borland still writes. Less Fortunate Pirates, subtitled Poems from the First Year Without My Father, is an honest, laid-bare ode to grief and the way life trundles on after someone dies. Tourist is set in part against the clamor of the 2016 presidential election.

"Bryan's writing is somewhat confessional, autobiographical," Phillips says. "On one hand, it's very tender and honest and open about gay male experiences. In his more recent work, he's been more overtly political, addressing the recent climate and what that means as a person, let alone a queer person in the South."

"I can't draw, I can't paint, and I can't take good photographs," Borland says. "But I can write. That is how I express myself."

Think of Sibling Rivalry as Borland's form of collective expression. He talks about speaking at Arkansas Governor's School in Conway and of students telling him their stories; about the 60-something-year-old black woman who hugged him at the annual Dodge Poetry Festival in Newark, N.J., and told him: "Now, I know who I am."