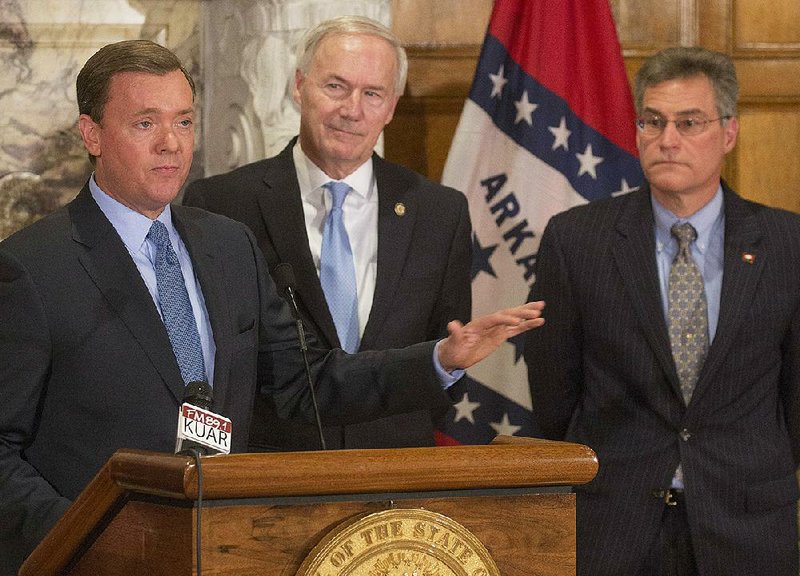 Some state lawmakers are second-guessing legislative changes approved earlier this year regarding the taxation of some types of car washes.

The changes were tucked into a state law with other tax provisions, including some that drew more attention -- sales and use taxes collected by out-of-state online sellers from in-state purchasers and cuts in the state's top corporate income tax rate.

During the regular legislative session earlier this year, the most contentious part of what is now Act 822 (Senate Bill 576 by Sen. Bart Hester, R-Cave Springs) was the overhaul of the taxation of car washes. The changes -- which both added fees and reduced taxes of car washes -- went into effect Oct. 1.

One car wash owner told lawmakers last week about the difficulty he had in following the tax code and meeting the new law's requirements.

State officials projected that the changes in the taxation of car washes would reduce state revenue by $3.2 million a year. By comparison, the state general revenue budget totals $5.75 billion this fiscal year.

State Sen. Gary Stubblefield, R-Branch, said he called a meeting of the House and Senate City, County and Local Affairs committees last week because a constituent called him about "the new tax on water usage in car washes.

"There is a situation where some of these car wash owners had other businesses such as a [public laundry] or a convenience store hooked up with the same meter," he said.

"In my opinion, there is no way to accurately determine or estimate the water usage in these car washes when you have that type of situation, other than putting in a separate meter," said Stubblefield, who is chairman of the Senate committee.

Wade Dunn, who owns the Eastside convenience store, laundry, deli and car wash in Glenwood and the Charleston Superstop gas station and convenience store in Charleston, said he learned about the water usage fee in June and reached out to Stubblefield; Sen. Terry Rice, R-Waldron; and Rep. Lee Johnson, R-Greenwood.

"There was some confusion about it because it was tied to the internet sales tax," Dunn said of the new law's changes in different taxes.

Act 822 changed the taxation of car washes as "a tax fairness issue for some members of the [Legislature's tax overhaul] task force," said Paul Gehring, an assistant revenue commissioner for the state.

"You had a certain type of car wash that wasn't subject to the sales tax and another was," he said.

Dunn received an opinion on Nov. 21 from the state Department of Finance and Administration that recommended one water meter for the automatic car wash, since it was subject to the usage fee, and a separate meter for the rest of his business.

But he said the solution to his problem isn't simply installing a water meter on the automatic car wash bay.

"It is completely overhauling it, adding a water softener and reverse osmosis system," he said. "It is just too complicated."

"I would be glad to pay it if somebody could tell me what to pay."

Gehring said state officials asked whether the manufacturer of the automatic car wash has an estimate on the number of gallons used on each car wash, which would enable the taxpayer to report an amount to the state each month.

Dunn said a man from whom he buys soap estimated that the car wash uses an average of 37 gallons of water for each car wash, but Dunn couldn't get more detailed information on the amounts of water used for various types of car washes, for him to be comfortable reporting the figures to the state.

Rep. Jack Ladyman, R-Jonesboro, said "I don't know how you can get numbers that are usable from a manufacturer when you are talking about different uses here, so I don't see how they would work."

Gehring said car wash operators have submitted about 86 reports for one month of water usage and the total amount collected through the water usage fee was about $49,000 in November.

About 100 car wash operations have registered to pay the water usage fee, and some operators may have more than one car wash, he said.

The car wash industry provided information to the department that there are 672 such businesses in Arkansas, with 67 car wash tunnels, 484 automatic car washes and 1,814 self-service bays, according to the department's impact statement on what is now Act 822.

Dunn, referring to various taxes, including those on candy and fuel, told lawmakers: "I am taxed out.

"In fact, I am selling one [store] now," he said. In a subsequent interview, Dunn clarified that he is considering selling one of his stores, but he declined to say which one.

Stubblefield said a proposed tax increase should be in a standalone bill, "so we can vote on them and have a good idea of what we are voting on."

In an interview, Stubblefield said he plans to propose legislation changing the taxation of car washes in the 2021 regular legislative session.

At last week's meeting, Rep. Jana Della Rosa, R-Rogers, apologized to Dunn "for what we have done to you."

She suggested lawmakers "stop voting for bills where we are mixing [tax] increases with decreases because, if we as a body refuse to vote for anything that is mixed like that, it won't get proposed to us anymore and we don't have these type of problems."

House Republican leader Marcus Richmond of Harvey said, "We are pretty good at shifting tax burdens around and then taking credit for some things that appear to create perceptions of actual tax cuts."

In an interview, Hester said the changes regarding taxation of car washes were included in this bill because it was part of the Legislature's tax overhaul task force recommendations.

The bill actually reduced taxes on the car wash industry, he added.

Sen. Alan Clark, R-Lonsdale, told his colleagues that many people try to obey the tax laws, but they find it frustrating and irritating that they have to work so hard to do so.

"I think this agency, commissioner, under your direction can be a lot more user friendly," he told state Revenue Commissioner Charlie Collins.

Collins, a former Republican state representative from Fayetteville, said he has met with dozens of employees in the past few weeks since he started work as revenue commissioner. He said employees "are very committed to doing the right thing," including making refunds to taxpayers who mistakenly pay more state taxes than they owe.

Rice said he doesn't want to leave Dunn at the mercy of state government.

"What are we going to do with this situation?" he pressed Collins.

Collins said he'll be glad to meet with Dunn and talk through his situation.

Gehring noted that Act 822's provisions regarding online retailers was not about "a new tax per se."

Arkansans already had an obligation to pay the use tax, and that's been part of Arkansas law for about 70 years, he said. (Use taxes are sales taxes applied to goods bought out of state and brought into Arkansas.)

Besides the changes in car wash and out-of-state online retailer taxation, Act 822 also:

• Changes the state's sales and tourism tax provisions to provide that "accommodations intermediaries" are now required to collect and remit Arkansas taxes when furnishing an accommodation in the state. That's projected to raise $3.1 million in state tax revenue in fiscal 2020 and then $4.2 million in fiscal 2021.

• Extends the net operating loss carry-forward period from five to eight years for losses occurring in the tax year starting Jan. 1, and to 10 years for losses in tax years beginning on or after Jan. 1, 2021, according to the finance department. That is projected to reduce state revenue in fiscal 2026 by $7.8 million and increase each subsequent fiscal year, eventually reaching $70 million in fiscal 2032.

• Changes the apportionment formula for multistate corporations from three factors to a single-sales factor. That's projected to increase revenue by $357,000 in fiscal 2021 and $714,270 in fiscal 2022 and beyond. 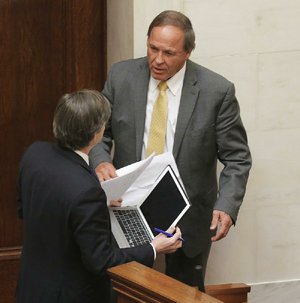 Senator Gary Stubblefield, right, sponsor of SB550, who spoke on the senate floor in favor of the measure Tuesday afternoon, speaks with Senator Will Bond, who opposes the legislation. The bill would amend the law regarding liquid livestock litter. 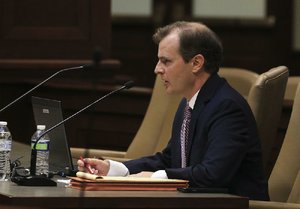 Photo by Staton Breidenthal
Arkansas Department of Finance and Administration Assistant Commissioner of Revenue Paul Gehring speaks Wednesday during a meeting in Little Rock of the Tax Reform and Relief Legislative Task Force. 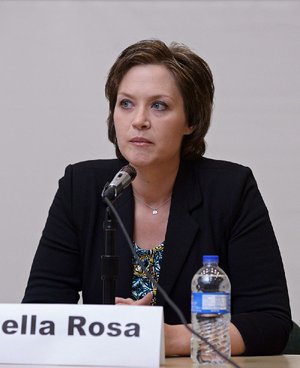 Photo by Ben Goff
State rep. Jana Della Rosa responds to a question on Thursday Feb. 25, 2016 as candidates for the Arkansas House of Representatives district 90 Republican nomination take part in a forum hosted by the Republican Women of Bentonville at Northwest Arkansas Community College in Bentonville.