An effort is underway to incorporate Holiday Island as a town.

Holiday Island, on Table Rock Lake about 8 miles north of Eureka Springs, was formed in 1970 by McCulloch Recreational Properties as a "suburban-improvement district" under Arkansas law.

Incorporation would allow Holiday Island to enforce its own codes and receive state "turn-back" money from gasoline taxes and other taxes to maintain streets and roads, said Dan Kees, the spokesman for Holiday Island Citizens for Incorporation.

"As a city, Holiday Island will qualify to receive those funds and establish zoning and building ordinances," said Kees, who is also a Holiday Island commissioner.

Kees said that a petition drive to get the incorporation on the 2020 general election ballot netted 557 signatures from voters. Only 498 signatures were needed, but Kees said canvassers got extras in case some didn't prove to be valid.

He said the petitions were submitted Wednesday to the Carroll County clerk for verification.

After the signatures are verified, the petition will go to the county judge, Sam Barr, who will schedule a public hearing on the matter, Kees said.

"If the petition is approved by Judge Barr, the issue will appear on the 2020 general election ballot along with candidates for mayor, recorder-treasurer, and five at-large aldermen," Kees said.

Kees said an effort to incorporate in 2017 failed because Holiday Island was within 3 miles of Beaver, population 100.

He said Act 932 of 2019 changed state law regarding incorporation and will make it easier for Holiday Island this time.

It changed Arkansas Code Annotated 14-38-101 to exempt municipalities with a population of more than 1,500 from the 3-mile rule, so Holiday Island, population 2,373, could incorporate.

The signatures of 25% of qualified voters are required on a petition to get the issue on the ballot.

Incorporating through direct petition requires the signatures of 50% of qualified voters.

"From our standpoint of both me and Rep. Breaux, our job is to represent the constituents," Ballinger said. "In this case, we had an overwhelming number of constituents who wanted to have the right to vote on incorporation. The existing code didn't allow that so we modified the code to make it where that is possible."

Beaver Mayor Ann Shoffit said her town has no problem with Holiday Island incorporating so close by.

"We don't have any problems with it at all," she said. "I had one person from Holiday Island say to me in the grocery store, 'We heard Beaver is going to take over Holiday Island.' I said, 'No that's not going to happen.'

"Nothing changes in Beaver, which is fine." 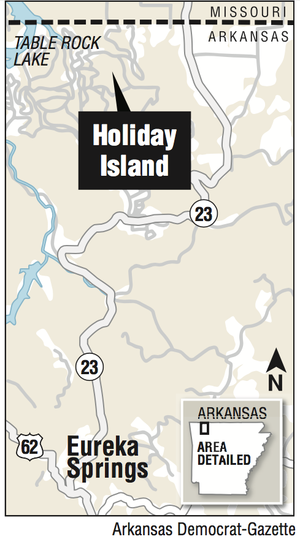