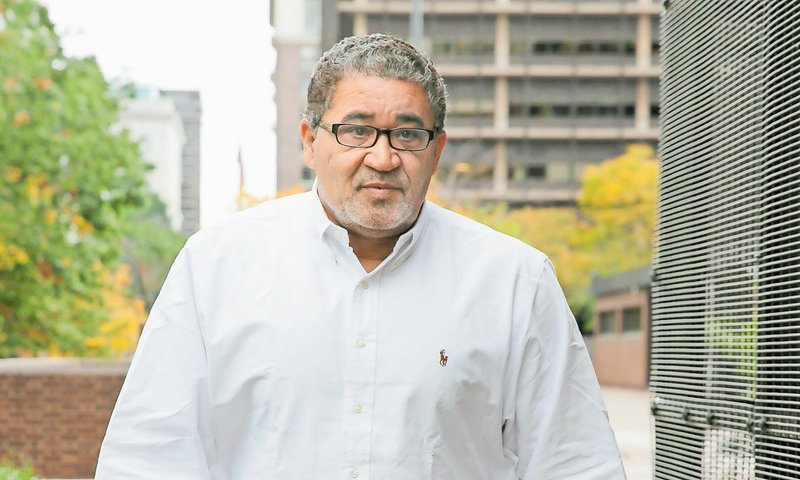 Philadelphia Inquirer/JESSICA GRIFFIN Donald "D.A." Jones exits Federal Court on Oct. 25 after an arraignment on charges he and another strategist conspired to hide a $90,000 payment the congressman made to pay a primary challenger to drop out of a 2012 race in Philadelphia.

A Philadelphia-based political operative who admitted to illicitly accepting nearly $1 million from what was once Arkansas' largest government-funded mental health care provider was sentenced Monday to one year in federal prison.

Donald "D.A." Jones, 64, was among a stable of politicos linked to Missouri-based Preferred Family Healthcare, a nonprofit ensnared in a multistate federal investigation that has convicted five former Arkansas lawmakers.

Jones pleaded guilty two years ago in Springfield, Mo., to conspiring to steal from Preferred Family in connection with lobbying payments.

The money was disguised as "training" and "consulting" to hide that the nonprofit was spending large sums on political advocacy, a no-no for firms that receive charity-based tax breaks, according to his plea.

Jones admitted to redirecting some of the money to Arkansas lobbyists who helped get him the work, kickbacks that his attorney said Monday were "demanded of him."

Jones was sentenced in Philadelphia, where he also pleaded guilty in 2017 to lying to investigators about his role in paying off an election challenger to a U.S. congressman in 2012. The cases were consolidated earlier this year for a joint sentencing.

Federal guidelines based on an array of factors suggested that Jones serve between two years, nine months and three years, five months in prison, according to a sentencing memo prosecutors filed last week.

The U.S. attorney's office asked for leniency but requested that Jones serve time, weighing his cooperation as a witness against what they described as crimes that undermined trust in government.

"Jones is a prolific schemer, who defrauded a charity of nearly $1 million to use in illegal political campaign activity and for kickbacks," U.S. Attorney William McSwain of Philadelphia said in an emailed statement. "He also [gave] false statements to the FBI to try to hide his schemes.

"To his credit, he eventually took responsibility for his crimes, but today he was held accountable and is headed to prison."

Jones' sentence includes the forfeiture of $973,807.28 -- the amount he admitted to accepting from Preferred Family from 2011 through January 2017. He'll face three years of supervised release after prison, a spokeswoman for the U.S. attorney's office in Philadelphia said.

"I express my remorse, my shame and my embarrassment to my family, and to anyone who has ever viewed me as an honorable man," Jones said in court Monday, according to The Philadelphia Inquirer.

Jones' attorney, Alan Tauber of Philadelphia, said in a phone interview that Jones had a "long and worthy" career that has helped give a political voice to "otherwise disenfranchised communities."

Jones worked on campaigns for former U.S. Rep. Elijah Cummings and the the first black mayors of Dallas and Houston, Tauber said.

"[U.S. District Judge Jan DuBois] credited this and was very complimentary of him for his lifetime of work in the African American community," Tauber said.

Jones was one of the earliest cooperators in probe of public corruption in Arkansas, and his December 2017 guilty plea alarmed Little Rock lobbyist Milton "Rusty" Cranford, prosecutors have said.

Cranford offered an unnamed government informant money to kill Jones, according to court filings by prosecutors, but Cranford has not been charged with a crime related to that allegation.

Cranford, who doubled as a Preferred Family executive, later faced several charges of his own. He pleaded guilty in June 2018 to one count of bribery.

Jones' advocacy for Preferred Family occurred at the federal level. His 2017 guilty plea cites direct contact with multiple unnamed congressional officials on behalf of the nonprofit, including hand-delivery of campaign checks and requests for government funding.

No federal lawmaker or congressional official has been accused of wrongdoing in connection with the lobbying.

Nonprofits such as Preferred Family are prohibited from excessive lobbying. Jones delivered kickbacks totaling $264,000 of the nearly $1 million he collected from the nonprofit to Cranford and his partner, former Democratic state Rep. Eddie Cooper, according to his guilty plea.

"He didn't go pitch these services," Tauber said. "He was recruited by the company to do them. ... Rusty demanded the money."

Jones cooperated with investigators as they built their case against Cranford, Tauber confirmed.

"My understanding is Rusty was involved in a lot of stuff," he said. "Don Jones was just one thing."

Other former executives of Preferred Family, previously known as Alternative Opportunities, have been accused of bribing lawmakers to boost government payouts, illegally paying lobbyists, improperly billing Medicaid and embezzling profits for themselves.

Preferred Family at its peak operated dozens of mental health and substance abuse clinics under the Dayspring, Decision Point and Health Resources of Arkansas brands. The firm collected hundreds of millions of dollars in taxpayer funding, state data shows.

The nonprofit sold its clinics here after the state suspended it from the Medicaid program, which is state and federally funded insurance benefits for children, people with disabilities and other low-income residents.

The other case attached to Jones' sentence is his 2017 guilty plea to lying to federal investigators about his role in funneling campaign cash from former U.S. Rep. Bob Brady, a Philadelphia Democrat, to buy out an election opponent. Brady, who did not face criminal charges, did not run for re-election in 2018, according to The Inquirer.

Technically, Jones' sentence is one year and one day. The extra day is significant because federal inmates who have been sentenced for more than one year qualify for early release based on good behavior, Tauber said.

If Jones behaves in prison, he could be free roughly 10 months after he's scheduled to report, which is Jan. 30, Tauber said.

"He didn't get rich off his business. He's going to get out and get back to work."