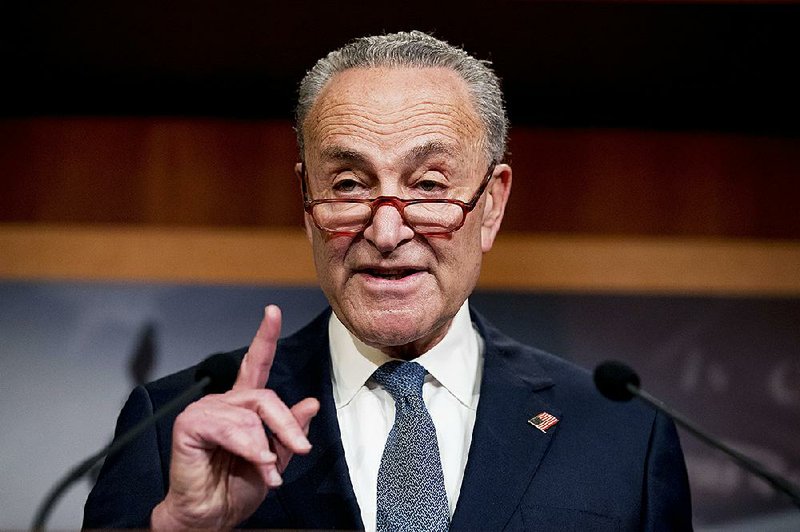 WASHINGTON -- The House Judiciary Committee formally presented its case for impeaching President Donald Trump in a 658-page report published online early Monday, arguing just days before a final vote in the House that he "betrayed the nation by abusing his high office."

The report, which echoes similar documents produced after the committee's approval of impeachment articles for Presidents Richard Nixon and Bill Clinton, contains no new allegations or evidence against Trump.

But it offers a detailed road map for the two articles of impeachment the committee approved, alleging that Trump abused the power of the presidency to enlist Ukraine in tarnishing his political rivals and obstructed Congress by blocking witnesses from testifying and refusing to provide documents.

The House is expected to vote Wednesday on whether to impeach the president, setting in motion a trial in the Senate early next year.

"President Trump has placed his personal, political interests above our national security, our free and fair elections, and our system of checks and balances," the report states. "He has engaged in a pattern of misconduct that will continue if left unchecked. Accordingly, President Trump should be impeached and removed from office."

[Video not showing up above? Click here to watch » https://www.youtube.com/watch?v=CSZpE9nEDkY]

The report argues that the House should charge Trump with abuse of power for holding up nearly $400 million worth of security aid and the promise of a White House meeting while urging Ukraine to announce investigations into former Vice President Joe Biden and 2016 election interference.

"When the president demands that a foreign government announce investigations targeting his domestic political rival, he corrupts our elections," the report states. "To the founders, this kind of corruption was especially pernicious, and plainly merited impeachment. American elections should be for Americans only."

It also urges the House to approve an article of impeachment charging the president with obstruction of Congress, saying that "President Trump's obstruction of Congress does not befit the leader of a democratic society. It calls to mind the very claims of royal privilege against which our founders rebelled."

The report includes a 20-page dissent from Rep. Doug Collins of Georgia, the top Republican on the Judiciary Committee, who accuses Democrats on the panel of conducting an unfair process in a partisan attempt to drive Trump from office because of their dislike of him and his policies.

"The case is not only weak but dangerously lowers the bar for future impeachments," he wrote. "The record put forth by the majority is based on inferences built upon presumptions and hearsay. In short, the majority has failed to make a credible, factually-based allegation against this president that merits impeachment."

Collins concludes: "Before the House are two articles of impeachment against the president of the United States, Donald John Trump. To these articles, the minority dissents."

The report by the Democratic-controlled committee rejects the criticism that the impeachment inquiry was unfair to Trump and Republicans, arguing that the president had many opportunities to have his lawyer present evidence or cross-examine witnesses during the inquiry.

"The president's decision to reject these opportunities to participate affirms that his principal objective was to obstruct the House's inquiry rather than assist in its full consideration of all relevant evidence," the report states.

More than a dozen Democrats announced they would be voting for impeachment. A handful are expected to break ranks as Speaker Nancy Pelosi of California marches the majority toward a vote she hoped to avoid having Democrats take on their own.

One freshman Democrat, Rep. Jeff Van Drew of New Jersey, saw five staff members resign Monday after he said he would vote against impeachment and indicated he was switching parties to become a Republican. Another Democrat, Rep. Collin Peterson, a Minnesota centrist, has not decided how he will vote, his spokeswoman said

Trump on Monday called the ongoing impeachment process "the greatest con job in the history of American politics."

"The Fake News Media, and their partner, the Democrat Party, are working overtime to make life for the United Republican Party, and all it stands for, as difficult as possible!" he tweeted.

The House Rules Committee will meet today in what is expected to be a marathon session to set the parameters for Wednesday's debate.

As the House was detailing its case against Trump, attention was turning to the Senate where the top Democrat, Sen. Charles Schumer of New York, called anew for fresh evidence and testimony from key White House officials for the Senate impeachment trial.

Senate Majority Leader Mitch McConnell of Kentucky is hoping to avoid a drawn-out spectacle in his chamber, though Trump has signaled he would prefer a full trial. Republicans, who hold the majority, are expected to acquit Trump of the charges during a trial starting in January.

In a letter to McConnell, Schumer proposed hearing testimony from former national security adviser John Bolton, acting White House Chief of Staff Mick Mulvaney and two others as part of a detailed offer he made to Republicans as an opening for negotiations.

Several Senate Republicans rejected that idea late Monday, saying the House should have gone to court to force those witnesses to testify over the White House's objections if Democrats wanted to hear from them. "We don't need to clean up their sloppy job," said Sen. Joni Ernst, a Republican from Iowa.

"The House can't decide not to go to court, send us a half-baked case and then say now, 'You make something out of it,'" said Sen. Roy Blunt, R-Mo.

Democrats want to hear from Bolton, who once labeled the alternative foreign policy orchestrated by Trump lawyer Rudy Giuliani a "drug deal" of which he wanted no part. Bolton left the White House in September. The Democrats also want to hear from Mulvaney, who has acknowledged the military aid to Ukraine was being held up, as well as two other White House officials who defied House subpoenas to testify. The aid was later released as Congress raised questions about the holdup.

McConnell is facing criticism for saying he's taking his "cues" from the White House as he ensures Trump there will not be the 67 votes needed in the Senate to convict the president. Democrats complain that he and other Republicans are not operating as impartial jurors.

The GOP leader is planning to meet soon with Schumer to discuss the contours of next month's trial, McConnell's office said.

White House press secretary Stephanie Grisham claimed Monday that it was "laughable" for Schumer to assert that he wants Trump to have a fair trial.

Information for this article was contributed by Michael D. Shear of The New York Times; by Lisa Mascaro, Mary Clare Jalonick, Laurie Kellman, Alan Fram, Darlene Superville, David Eggert and Steve Karnowski of The Associated Press; and by John Wagner and Brittany Shammas of The Washington Post.