Taking time off: After 1-9 start, Pennell on leave of absence 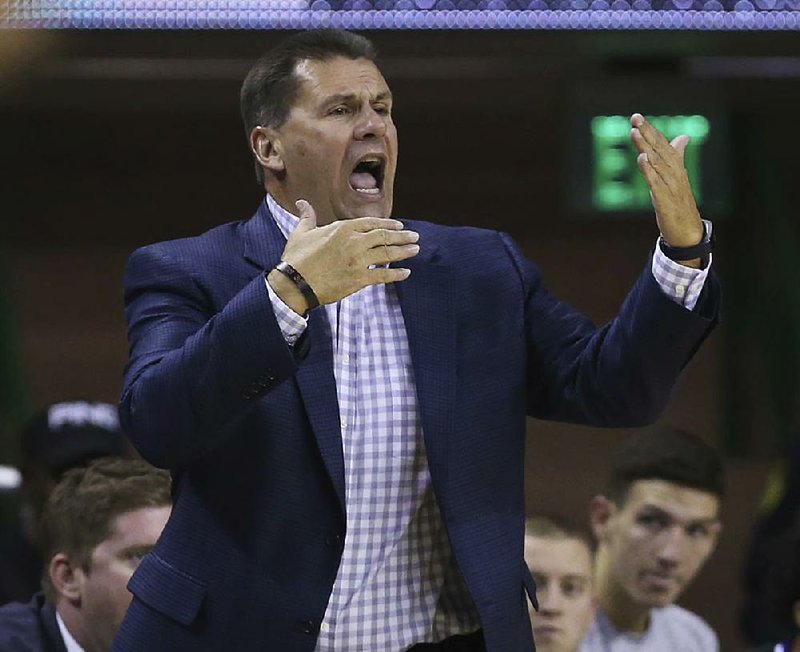 Central Arkansas Coach Russ Pennell, who is in his sixth season with the Bears, is taking an indefinite leave of absence because of personal reasons, the school announced Monday. UCA is 1-9 this season, with the lone victory coming against Hendrix College.

The University of Central Arkansas announced in a news release Monday that men's basketball Coach Russ Pennell has taken an indefinite leave of absence due to personal reasons.

UCA Athletic Director Brad Teague told the Arkansas Democrat-Gazette on Monday that Pennell informed him Friday he wished to take a leave of absence. Pennell did not coach in UCA's 92-79 loss to Pepperdine on Saturday night in Malibu, Calif. It was the first game Pennell has missed this season.

Teague was unsure if Pennell will be back this season.

Earlier Monday, Jeff Goodman, a prominent college basketball insider for Stadium, reported that UCA had parted ways with Pennell. Teague later informed the Democrat-Gazette that report was not true and that Pennell was still with UCA but taking a leave of absence. In a text to the Democrat-Gazette on Monday, Pennell also said he had not been dismissed from the program.

Pennell, who's in his sixth season at UCA, has led the Bears to a 1-9 start, with their lone win coming against Hendrix College on Nov. 7. Through 10 games, UCA has played a daunting schedule, which included road contests at No. 10 Baylor, Georgetown, No. 4 Duke, Wichita State and Utah. Wichita State and Georgetown are each currently receiving AP Top 25 votes.

"We knew this schedule was gonna be very challenging. There was not gonna be any doubt about that. Nobody had their head in the sand and thinking this was gonna be easy," Pennell told the Democrat-Gazette earlier this month. "It's unfolded about how we thought it would. Not what we wanted, but what it is. What we have to do is just try to keep our wits about us, keep working hard and understanding that everything we have to do is toward the conference. That's just the way you have to do things at our level."

The Bears host Incarnate Word (3-7) on Wednesday at 12:30 p.m. in Conway for the Southland Conference opener.

Pennell, a former point guard at the University of Arkansas and UCA, is 50-117 overall and 32-57 in Southland play in six seasons in Conway. The Bears have reached the Southland Conference tournament quarterfinals each of the last two seasons. In 2017-18, UCA made the College Basketball Invitational and reached the quarterfinals.

In Pennell's first two seasons at UCA (2014-15 and 2015-16), the school was on a two-year postseason ban due to low APR scores during former coach Corliss Williamson's tenure.

UCA hired Pennell in 2014 to replace interim coach Clarence Finley. Pennell was the interim coach at Arizona in 2008-09 after Lute Olson retired in the preseason and led the Wildcats to the Sweet 16, where they lost to Louisville. He went to Grand Canyon, where he was 72-44 in four seasons and led the Antelopes to two consecutive NCAA Division II tournaments before being let go in March 2013.