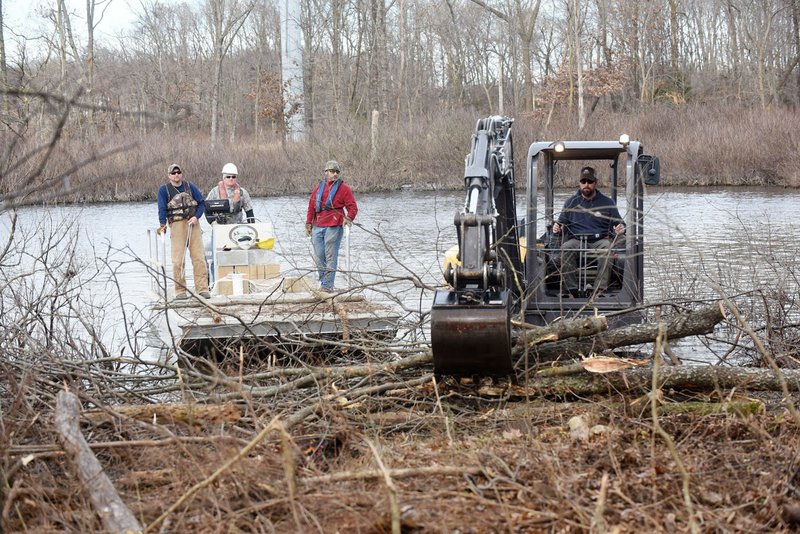 NWA Democrat-Gazette/FLIP PUTTHOFF Workers with Southwestern Electric Power Co. and Arkansas Game and Fish Commission remove trees on Dec. 4 2019 around the Flint Creek Power Plant and sink them in Swepco Lake. Thinning some trees improves forest health and the submerged timber is good for fish.

There's a healthier forest around Swepco Lake and better habitat for fish thanks to a week of teamwork on land and water.

Workers from Southwestern Electric Power Co. and the Arkansas Game and Fish Commission thinned the forest of more than 500 trees on 1,600 acres of power company property. The trees were sunk in the lake to become much needed fish habitat.

People may also see the lake via the Eagle Watch Nature Trail. The trailhead is one mile west of Gentry on Arkansas 12. A level path of one-half mile leads to the lake and wildlife viewing pavilions. Swepco Lake is home to numerous bald eagles during fall and winter.

The growl of chain saws filled the forest Dec. 3-6 around the 500-acre Swepco Lake that is one of Northwest Arkansas' favorite fishing lakes, especially during winter. Warm water released from the Swepco coal-fueled Flint Creek Power Plant keeps the lake temperature springtime warm even in January.

Fishing for black bass is excellent and may get even better with the added trees.

Game and Fish does two major habitat improvement projects each year around the state, said Jon Stein, Northwest Arkansas fisheries biologist with Game and Fish. He and biologist Kevin Hopkins manage the fisheries at Swepco, Beaver and other lakes and streams in the region.

Swepco was tabbed for a project this year. A platoon of Game and Fish employees from around the state joined power company workers to complete the task.

Trees beneficial to wildlife, such as acorn-bearing oaks, were left standing. Most trees removed were small to medium sized elm and hickory and cedar trees.

"Game and Fish came in with an instrument that measures tree density and gives out numbers that indicate a healthy forest," Carney said, touring the work on Dec. 4. "They determined our forest was too thick."

"We're always looking to do environmental projects whenever we can," Carney said, "especially when it helps the forest and the lake."

The whine of outboard engines sounded across the water as six Game and Fish work barges moved the cut trees around the lake for sinking. Six or seven trees were tied in a bundle for sinking. About 75 tree bundles now rest on the bottom. Concrete blocks were attached to bundles of trees to sink them at various depths all around the lake.

"There's some standing timber at a couple places, but the lake was lacking in wood fish habitat," Stein said. The trees give newly hatched fish shelter so they don't get eaten by larger fish.

Adult fish, including trophy-sized largemouth bass, hang around the trees seeking to pick off a meal. Anglers fish near timber, hoping to catch the bigger fish.

In a week or two, the GPS coordinates of the tree bundles will be available on the Game and Fish web site at:

Anglers should be able to load the coordinates into a depth finder if it has that capability.

At Swepco Lake, black bass are the prize for most fishermen. Crappie fishing is improving at Swepco. In November 2018, Game and Fish stocked 25,000 crappie averaging 5 inches into the lake. A study in April at the lake revealed good growth rates, with some crappie measuring around 10 inches.

Currently there's no length limit on crappie at Swepco. Crappie at Beaver and some other area lakes must be 10 inches or longer to keep.

Crappie tend to bunch up around underwater timber. All those trees will go a long way to boost crappie fishing at Swepco, said Brad Wiegmann of Springdale, a multispecies fishing guide at Swepco and Beaver lakes.

"For crappie, it's going to give them a place to get away from those black bass so they don't get eaten," Wiegmann said.

The new habitat will be good for threadfin shad. These are small bait fish that are a primary food source for all game fish at Swepco.

"Algae will grow on those trees and the shad eat that algae, so it'll be good for the shad population," Wiegmann said.

Threadfin shad, gizzard shad and sunfish are the main foods of black bass at the lake. To boost the bass forage, Game and Fish stocked 145,000 threadfin shad at Swepco Lake in 2017.

Crappie have been stocked to increase their numbers, but black bass reproduction occurs naturally, Stein said. Stocking them isn't necessary.

Trees deep down in lakes like Swepco are home for black bass and crappie. Less timber in the forest and more in the water is good for Swepco Lake.