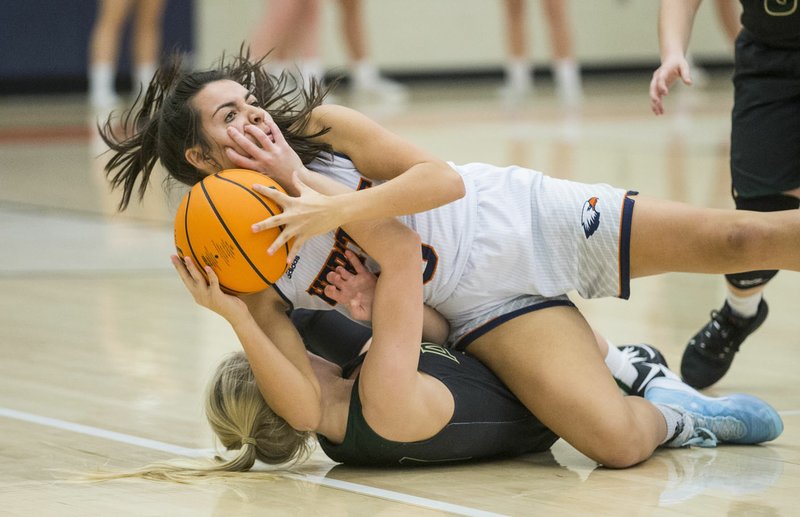 ROGERS -- Rogers Heritage struggled over the weekend at a tournament in Springfield, Mo., but girls basketball coach Josh Laymon liked the way his team responded on Tuesday night.

Alex Pabon scored a game-high 16 points, including eight in a key third quarter, to help the Lady War Eagles pull away for a 51-36 victory over Alma in nonconference action at War Eagle Arena.

Heritage (6-6) outscored Alma (4-4) 17-6 in the third quarter to take a double-digit lead and go on to the win, snapping a four-game losing streak.

"We didn't play to expectations this weekend and challenged the kids, and they responded as well as could be imagined," Laymon said. "The kids' approach to adversity from this past weekend getting into open gym time, practice time and playing in a game is a big step forward for us. They responded well and came out prepared to play tonight."

The Lady War Eagles led only 27-26 at halftime but opened the second half with nine straight points and held Alma without a field goal for more than 6½ minutes. Pabon's rebound bucket gave Heritage a 40-37 lead before Hillarie Mata drilled a 3-pointer for Alma's first field of the half with 1:28 left in the third quarter.

Heritage switched between man-to-man and zone defense in the first half, but Laymon credited assistant coach Stephanie Jeffery with seeing how the Lady War Eagles were more effective with the zone. He decided to go with that in the second half, and the Lady War Eagles held Alma to just 10 points in the final two quarters.

"Coach Jeffery, she had a solid idea for us to change things up, and it worked out magnificently," Laymon said.

Pabon, a 6-0 senior, also did well inside against a smaller Alma team.

"She's starting to really find her niche offensively and within the system," Laymon said. "She's such a good athlete. She's hard to slow down when she gets a head of steam."

Lanee Knight was also in double figures with 10, all in the second half. Maddie Lynge chipped in nine.

Alma coach Codey Mann said the first half and second half were drastically different for his team.

"Rogers Heritage did a lot better job in the second half of guarding us. We've got to figure out ways to get to the foul line, attack the basket and be strong. When we do turn them over, we've got to convert."

The War Eagles jumped to a 24-7 lead after a quarter and never looked back.

Logan Glenn poured in 24 points, including five 3-pointers to lead three players in double figures for the War Eagles (5-2), who led 49-23 at halftime.