Letter to Pelosi voices frustrations by Compiled by Democrat-Gazette staff from wire reports | December 18, 2019 at 4:34 a.m. 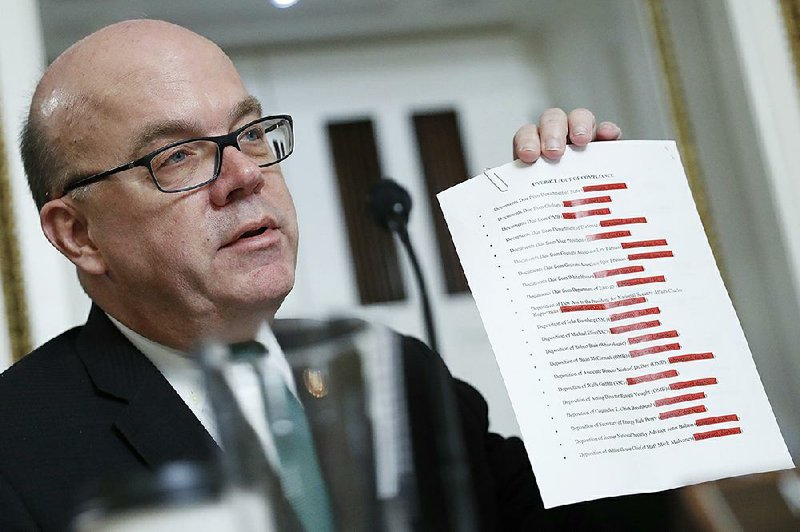 During a House Rules Committee session Tuesday, Chairman Jim McGovern displays a list of people and organizations that have not complied with impeachment investigators. More photos at arkansasonline.com/1218hearing/. (AP/Andrew Harnik)

WASHINGTON -- President Donald Trump on Tuesday denounced the looming House vote to impeach him as a "partisan impeachment crusade" being waged by Democrats, describing the effort to remove him from office as an "attempted coup" that would come back to haunt them at the ballot box next year.

As the House moved toward votes today to impeach Trump on charges of abuse of power and obstruction of Congress, the president used a six-page letter to Speaker Nancy Pelosi to try to make his own case.

"This is nothing more than an illegal, partisan attempted coup that will, based on recent sentiment, badly fail at the voting booth," Trump said in the letter.

"History will judge you harshly as you proceed with this impeachment charade," he wrote.

[Video not showing up above? Click here to watch » https://www.youtube.com/watch?v=sZCEQRqfU8s]

The president disputed both impeachment charges.

The articles were drafted after a two-month inquiry by the House Intelligence Committee, which heard testimony from members of Trump's administration who said Trump sought to pressure Ukraine to investigate his political rivals while holding back nearly $400 million in military assistance and a White House meeting.

The charges against Trump assert that he engaged in a corrupt scheme to enlist a foreign power for his own political benefit in the 2020 election, followed by an effort to conceal his actions by blocking congressional investigations.

Trump on Tuesday accused Pelosi and her party of fabricating lies against him, saying that the speaker and Democrats were possessed by "impeachment fever" and vowing that he and the Republican Party would emerge stronger after he is vindicated in a Senate trial.

Pelosi, who warned earlier this year against pursuing a strictly partisan impeachment, nonetheless has the numbers to approve it. According to a tally compiled by The Associated Press, Trump is on track to be formally charged by a House majority.

"Very sadly, the facts have made clear that the President abused his power for his own personal, political benefit and that he obstructed Congress," Pelosi wrote to colleagues. "In America, no one is above the law."

"During this very prayerful moment in our nation's history, we must honor our oath to support and defend our Constitution from all enemies, foreign and domestic," she said.

Trump wrote that he knew his letter would not change the outcome of today's vote. But he said the document was "for the purpose of history and to put my thoughts on a permanent and indelible record."

Trump released the letter Tuesday afternoon as lawmakers began taking steps toward the final vote by drafting rules for debate on the House floor. Meeting in a hearing room upstairs from the House chamber, the House Rules Committee kicked off the broader House debate over the fate of Trump's presidency.

"It's unfortunate that we have to be here today, but the actions of the president of the United States make that necessary," said Chairman Jim McGovern, D-Mass., gaveling the Rules Committee.

McGovern said, "Every day we let President Trump act like the law doesn't apply to him, we move a little closer" to rule by dictators.

The top committee Republican, Tom Cole of Oklahoma, said, "When half of Americans are telling you what you are doing is wrong, you should listen."

No Republicans have indicated they will support the the two articles of impeachment.

"This scheme to corrupt an American presidential election subordinated the democratic sovereignty of the people to the private political ambitions of one man, the president himself," said Rep. Jamie Raskin, D-Md., a member of the House Judiciary Committee. "It immediately placed the national-security interests of the United States of America at risk."

But one by one, centrist Democratic lawmakers, including many first-term freshmen who built the House majority and could risk their reelection in districts where the president is popular, announced that they would vote to impeach.

Rep. Abby Finkenauer, D-Iowa, referred to the oath she took in January as she was sworn into office as guiding her decision. She announced support for both articles of impeachment to "honor my duty to defend our Constitution and democracy from abuse of power at the highest levels."

Some lawmakers have crossed party lines. Freshman Democrat, Rep. Jeff Van Drew of New Jersey, is indicating he will switch parties to become a Republican after opposing impeachment. Earlier this year, Michigan conservative Rep. Justin Amash left the GOP when he favored impeachment.

One new Democratic congressman, Jared Golden of Maine, said he would vote to impeach on abuse of power but not obstruction.

In the Senate, the top two leaders Tuesday argued over the structure of an expected impeachment trial.

Senate Majority Leader Mitch McConnell, R-Ky., rejected a call from his Democratic counterpart, Minority Leader Charles Schumer of New York, to subpoena new witnesses for the proceedings, which are expected to begin next month, and suggested Schumer didn't understand the Constitution.

Asked during a later interview with The Washington Post about the contentious and public tit for tat between the two leaders before a formal meeting has even been scheduled, Schumer said McConnell was the one creating the tensions.

He argued that Republicans have not given "one solid reason, one simple reason" why a slate of Trump administration witnesses demanded by Democratic senators should not appear during next month's all-but-certain impeachment trial.

"You know, when you don't have the facts, when you're afraid to argue why these witnesses shouldn't be here, you look for one diversion or another," Schumer said.

Speaking on the Senate floor, McConnell said the request by Schumer, made Sunday, was "dead wrong" and suggested that the House's case against Trump is "deficient."

"We certainly do not need jurors to start brainstorming witness lists for the prosecution," McConnell said, referring to the role of senators during the trial.

Mulvaney, Blair and Duffey defied subpoenas from House committees, while Bolton, who was not subpoenaed, has said he would fight one in court.

"The fact that my colleague is already desperate to sign up the Senate for new fact-finding ... suggests something to me," McConnell said of Schumer. "It suggests that even Democrats who do not like this president are beginning to realize how dramatically insufficient the House's rushed process has been."

McConnell then argued that the Senate shouldn't be in the business of building a case for impeachment, a job he said is the responsibility of the House.

"If House Democrats' case is this deficient, this thin, the answer is not for the judge and jury to cure it over here in the Senate," he said. "The answer is that the House should not impeach on this basis in the first place."

Schumer dismissed that argument in the Post interview, insisting he believes the House has done a "great job." He also did not rule out calling for additional witnesses such as Rudy Giuliani, the president's personal attorney who recently traveled to Ukraine and has recently defended the push to oust Marie Yovanovitch, the former U.S. ambassador to Ukraine. 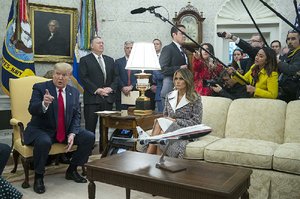 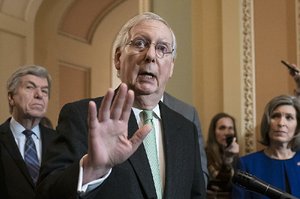 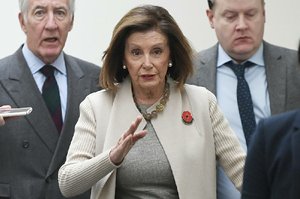 House Speaker Nancy Pelosi appears to have enough votes to refer the impeachment to the Senate. (AP/Susan Walsh) 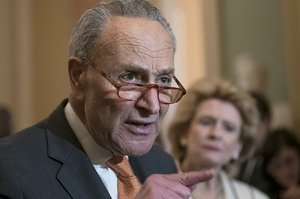 Photo by AP
Senate Minority Leader Chuck Schumer, D-N.Y., speaks to reporters after saying on the floor that he wants to call top White House officials to testify for the Senate trial, which is set to start next year if the House impeaches President Donald Trump this week, at the Capitol in Washington, Tuesday, Dec. 17, 2019. (AP Photo/J. Scott Applewhite)